An Incisive, In-depth Analysis on the Compact Loaders Market

This study offers a comprehensive, 360 degree analysis on the Compact Loaders market, bringing to fore insights that can help stakeholders identify the opportunities as well as challenges. It tracks the global Compact Loaders market across key regions, and offers in-depth commentary and accurate quantitative insights. The study also includes incisive competitive landscape analysis, and provides key recommendations to market players on winning imperatives and successful strategies.

In the U.S., there is a major need to upgrade the existing infrastructure, especially road infrastructure. As per the estimates by the U.S. government, one out of nine U.S. road bridges are in need of urgent repair, 30% of major roads are in poor condition and 42% of major urban highways are congested. In the 2013 U.S budget, in a major move to upgrade the road transport sector, a Surface Transport Reauthorization Bill, worth US$ 476 Bn for a period of six years was earmarked. Such type of investments will include construction of bridges, highways and mass transit construction projects till the year 2018. Also, during this six year period, the bill also includes reconstruction of roads, dams, buildings and bridges. Such massive investment in the construction sector in the United States is likely to stimulate the construction sector in the country, which in turn is likely to boost the demand for compact loaders in the global market.

Growing urbanisation in the APEJ region is expected to fuel construction activity, which in turn is likely to boost the market for compact loaders 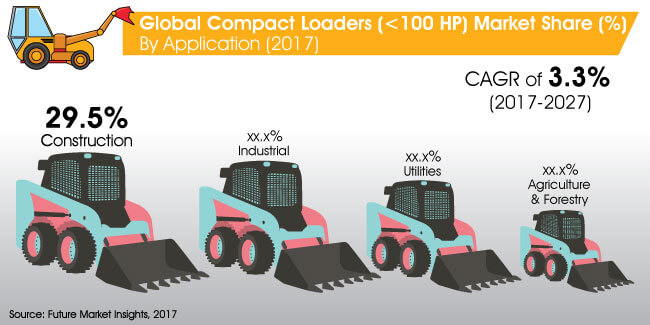 Future Market Insights presents yet another comprehensive and insightful report titled ‘Compact Loaders Market: Global Industry Analysis 2012 – 2016 and Opportunity Assessment 2017 – 2027’. Compact loaders are mainly used in various industries to load materials from one place to another. Such kind of equipment are smaller in size and have less capacity than the conventional heavy construction equipment. In this report, all the compact loaders under 100 HP capacity for use in construction, agriculture, industrial and utility sectors are considered.

Overall market size has been analysed through historical data, primary responses, and public domain data. Revenue of companies in the compact loaders market has been benchmarked to ascertain the market size for the base year. Macroeconomic indicators such as GDP and industry growth have been considered to forecast the market size over the forecast period. The historical growth trend of end-use industries, market participants’ performance, as well as the present macro-economic outlook has been taken into consideration for estimating the overall market trend forecast. This data is then validated using the triangulation method and is extensively scrutinised using advanced tools to garner quantitative and qualitative insights into the global compact loaders market.