Key factors bolstering the demand for bulk industrial packaging containers such as jerry cans include high performance of manufacturing sectors and implementation of industrial outputs. The low cost of manufacturing in Southeast Asian countries such as Indonesia, Vietnam, and Philippines led manufacturers across the globe to move their production facilities to countries in this region.

Jerry cans are not a part of military and industrial usage but they are extensively used for packaging of household and agricultural products, chemicals, and sanitary supplies. Jerry can manufacturers are focusing on new product launches and innovations to strengthen their consumer base. Overall, the global outlook of the global jerry cans market is expected to remain positive during the forecast period (2019 – 2029).

IBCs (intermediate bulk containers) account for lower costs of storage and transportation of fluids as compared to drums. The round shape of drums uses up a significant space, whereas IBCs ensure maximum space utilization. The above factor may hinder the growth of the global jerry cans market.

Moreover, IBCs are capable of completely draining liquids, which is not possible in case of jerry cans, as significant residues are left at the bottom. Chemical and beverage industries are thus switching to IBCs, which in turn, is expected to be one of the restrains for the metal jerry cans market in the near future. 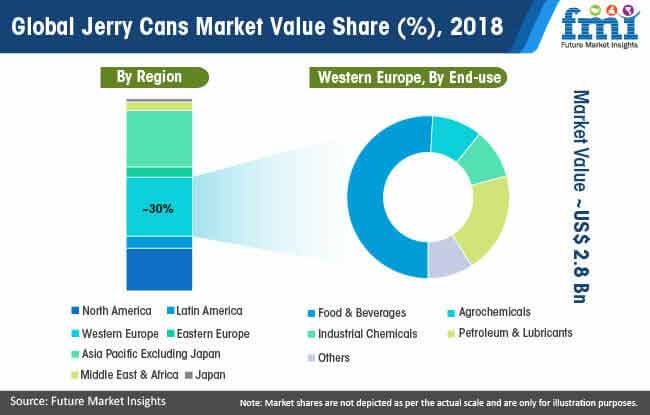 The global jerry cans market is segmented in detail to cover every aspects of the market and present a complete market intelligence approach to readers.