Pectin is a soluble fiber component found in the cell walls of plants. Citrus fruits, apples, apricots, cherries, oranges, and carrots are the most common sources. However, apple and dried citrus peel, both of which are commercially accessible in white and light brown powder, are the most common raw materials utilised in the manufacturing of industrial products.

Pectin is utilised as a gelling, thickening, and stabilising factor in a variety of fruit products such as marmalades, fruit-based yogurts and desserts, and baked goods. It's also used in confectionery to give jams and jellies a gel structure. Its use in food and other products has several advantages, including reduced cooking time, improved texture and colour, and increased shelf life. It's also utilised in wound healing preparations and specialist medical adhesives in the pharmaceutical business.

It is a complex process to make pectin from its raw materials. Companies in the pectin industry are working on new technology to extract the substance from its natural sources. These technologies can aid in the production of it, as well as other useful food ingredients for beverages and food waste. Microwave-based technology is one such example.

Pectin is a fibre found in fruits that are most usually utilized to produce medicines due to its medical characteristics and proclivity to lower cholesterol levels. It helps to avoid heavy metal toxicity from lead, strontium, and other heavy metals. It works by stimulating cell death pathways in cancer cells to treat colon and prostate cancer.

Pectin's use in the medical area is extensive, and as people turn to natural and plant-based solutions for treating a variety of diseases, pectin will be at the top of the list in terms of serving customers, thanks to its unique property. 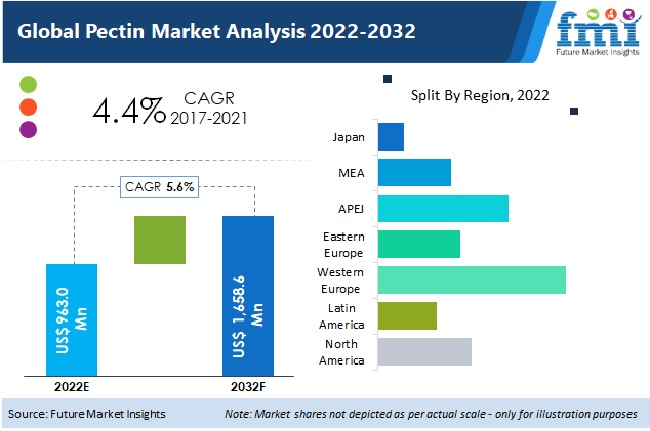 Pectin is a type of food gum that is widely used. It's made from apple and citrus peels, and it's one of the most label-friendly and flexible gums out there. As a result, it's favoured in many clean-label formulations, particularly in dairy-alternative beverages, which include low-sugar and low-pH varieties. Jellies, jams, fruit syrups, yogurts, yogurt drinks, and dairy-alternative yogurts are all good low-pH options. Confectionery chews, gummies, and glazes are some of the other applications.

Leading citrus pectin companies are working on backward integration for company development and expansion of their existing manufacturing capacities, as well as generating clean label products and obtaining the necessary certifications. For example, Algaia in France and Herbstreith & Fox in Germany have formed cooperation to further the development of clean label pectin and alginates for a variety of baking applications.

Urbanization and Globalization Driving Growth of Pectin Market in India

The factors such as rising population and middle-class income are the reason the pectin market in India is predicted to expand. Recent supply chain and urbanisation developments have also had a significant impact on the market. Pectin powder's market could develop due to an increase in the consumption of functional foods as a result of people's hectic lifestyles.

India does not generate enough pectin to meet domestic demand, despite its enormous resources. Pectin is made from industrial waste from the apple and citrus processing industries all over the world. However, India's apple and citrus processing businesses are small. Pectin's customer base is growing as a result of a huge number of people who have been impacted by the western diet.

High Usage of Nutritional Supplements Driving the Growth of the Market

The United States has the biggest market share for pectin. Increased consumption of foods and food items with possible health advantages has stemmed from consumers' desire to live a better lifestyle. Consumers are more aware of their dietary habits.

In recent years, consumer attitudes and awareness towards plant-based diets have altered in the United Kingdom. The continual improvements in the additives market have had an impact on the emerging food and beverage enterprises. Natural ingredients and additions have been shown to be beneficial in the food sector.

Furthermore, the expanding vegan population in the country continues to be the key driver of the demand in question. Furthermore, the growth of market is being driven by the increasing application areas of hydrocolloids, such as managing the thickening and gelling qualities of watery foods, as well as the natural property of hydrocolloids. Its use and composition are governed by a variety of food additive rules. Pectin and amidated pectin (a modified version of it) have both been assigned an Acceptable daily intake (ADI) for Food by the Scientific Committee in the European Union.

Sales of personal care items and ingredients are predicted to grow significantly in countries including India, China, Southeast Asia, and Japan over the assessment period. Food and beverage firms are implementing aggressive go-to-market tactics in these regions, including collaborations, M&A, alliances, and divestitures, in addition to focusing on organic development.

Over 35% of the market was accounted for by the thickener functional segment. Because of its chemical and physical properties, pectin is widely used as a thickening in a variety of culinary products. It has the ability to create highly hydrated cross-linked polymer networks. The market for thickeners is followed by the market for gelling agents. Pectin is used in cooking and comes in two types: high-methoxyl (HM) and low-methoxyl (LM) (LM). To induce the gelling process, one requires the presence of sugar and a particular amount of acid, while the other requires the presence of calcium.

Food & Beverage is the most important application sector, accounting for more than 40% of the total market. It's employed in pastries and fruit applications (such as jams, jellies, and desserts). The need for pectin in pharmaceuticals and cosmetics is increasing rapidly to form gels and structured fluids, which is utilised to make textures. It's also utilised as a film-forming and water-binding agent, depending on the raw materials and manufacturing conditions.

Manufacturers are concentrating on particular strategies, such as acquiring small companies who have long been active in the pectin market. These acquisitions can help companies expand their regional and local markets while also gaining consumer trust. They're also expanding their market share by developing a variety of pectin-based goods. In short, they're attempting to entice customers by offering a blend of innovation and natural product richness all in one package.

The benefits of pectin are still unknown to the general public, who prefer gelatin, an animal-derived gelling agent, to pectin. As a result, manufacturers of plant-derived and vegan pectin products are investing a significant portion of their revenues in promotional activities and are developing a variety of innovative techniques to enlighten customers about the benefits of pectin. The Key Players in the market are Ingredion Incorporated, Cargill Incorporated, CP Kelco, Tate & Lyle LLC, Koninklijke DSM N.V., Naturex, Lucid Colloids Ltd., DowDupont, Silvateam S.p.A., Compañía Española de Algas Marinas S.A (CEAMSA)

How much is the Pectin market current worth?

Currently, the Pectin market is worth more than USD 990 Mn.

What are the key trends boosting Pectin sales?

The demand for pectin in Natural and clean label ingredients also with its high medical properties driving the market.

Manufacturers are concentrating on particular strategies, such as acquiring small companies who have long been active in the pectin market. manufacturers are investing a significant portion of their revenues in promotional activities and are developing a variety of innovative techniques to enlighten customers about the benefits of pectin.

Which are the major countries driving demand for Pectin?

Who are the major players in the Pectin market?