[399 pages Report] The phosphates market will generate revenue, surpassing US$ 16.1 Bn in 2021. Between 2021 and 2031, the market is forecast to exhibit compound annual growth rate (CAGR) of 2.4%. Food and feed grade phosphates are set to register a positive growth outlook with a CAGR of 2.3% through the assessment period.

Growing concerns about food security around the world are encouraging the use of agrochemicals. The demand for food and feed formulations is on the rise. Future Market Insights (FMI) estimates that the phosphates market will register a year-on-year growth rate of 1.6% in 2021.

The agricultural sector has witnessed strong growth over the past decade. This is attributable to the strong demand for food and cash crops across developed and developing countries. This has resulted in increased demand for fertilizers on a global scale. Further, the demand for animal feed has boosted the consumption of phosphates. 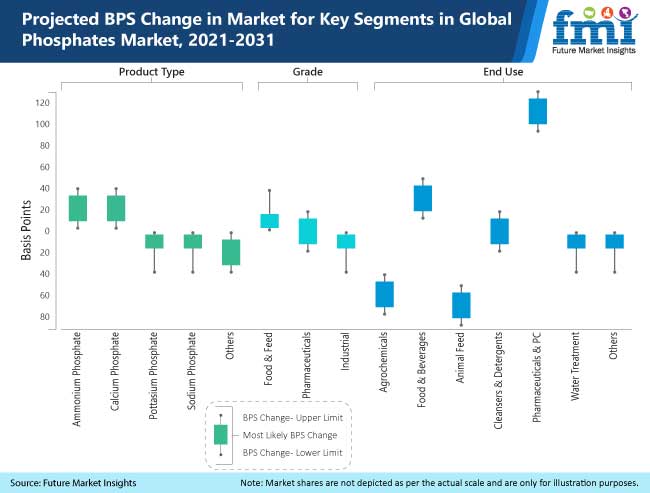 Moreover, the decreasing cultivation area owing to urbanization and industrialization will boost the demand for fertilizers in the near future. Decreasing nutrition values of soil is anticipated to fuel growth in the long term.

How are Government Subsidies and Incentives influencing Growth?

Governments are aiming to maximize yields from agricultural landholding, and are aiming to increase support towards production of harmless fertilizers, which can increase the productivity of the soil.

For instance, in the Netherlands, the government support program GENEOG aims at identifying effective products and assists in funding for registration, while aiding grower knowledge for sustainable crop protection products.

The Indian government has allocated funding for crop protection products, while making provisions for highly subsidized fertilizers for farmers. India is an emerging market in the APAC region where contribution of the agricultural sector to overall GDP growth is significant.

What is the Impact of the COVID-19 Crisis on the Phosphates Market?

The global economy has witnessed a significant downfall during the Covid-19 pandemic owing to severe restriction and lockdowns in various regions. Restrictions in logistics and transport resulted in the decrease of trade activities, which has hampered supply chain networks.

The phosphate market is anticipated to witness positive growth during the pandemic due to the increasing demand for fertilizers in the key agricultural markets. Demand for industrial grade products has slumped in the year 2020. However, the demand for fertilizers and animal feed has fuelled growth for the duration of the crisis.

How is the Phosphates Market Faring in the U.S.?

In 2021, the U.S. phosphates market is expected to grow by 2.4% year on year, bucking initial scepticism about how the market would perform during a global pandemic. Across the whole of North America, total demand of ammonium phosphate is expected to reach 1,441.1 million.

With the high production rate of several agricultural products, the U.S. is one of the key countries for the consumption of phosphate-based fertilizers. The presence of several key players the country is also estimated to drive phosphate production. Enormous reserves of phosphate rock bode well for players in the country.

Why is the Demand for Phosphates Rising in India?

India is anticipated to remain one of the fastest growing markets for Phosphates. The country is expected to witness a growth rate of 3.2% in 2021. This strong demand is attributed to high fertilizer consumption.

The growing population of the country and the demand for fertilizers for the production of animal feed will also boost the consumption of phosphates in India.

How is China’s Agricultural Sector Contributing to the Phosphates Market?

China is expected to be a key manufacturer and consumer of phosphates all over the globe accounting for around 52% of the overall phosphates market in Asia Pacific region in 2021. The country has witnessed strong growth in the agricultural field in the past decade.

China’s agricultural sector generates more than a trillion dollar of the economy in the country, which boost the demand for phosphate fertilizers. China is the most populous country in the world which also results in the high consumption of food. This demand for agricultural and horticultural products, which ultimately fuel growth in the country.

How are the Growth Prospects of Phosphates Sales in Morocco?

Morocco is expected to account for about 14% of the global phosphate rock production. The country has an enormous reserve of phosphates. Key players are mining phosphate rock in the country for associated fertilizer formulations to increase their turnover.

Morocco is also estimated to be one of the key exporters of phosphate-based products all over the world. Market participants can witness considerable opportunities in the country for owing the availability of cost-efficient labour and relaxed regulations in the chemical industry.

Ammonium phosphate is witnessing a considerable growth and is expected to account for about 69% of the overall phosphate volume consumption in China. The segment is further expected to grow continuously in near future owing to high production and consumption of DAP and MAP fertilizers.

Which Phosphate Grade is Expected to Dominate the Market?

With the high demand of phosphates in fertilizers production, animal feed and food and beverages industry, the food and feed grade segment is estimated to account for about 93.3% of the global market.

Which End Use Industry is Essential to Driving Demand?

Revenue in the agrochemicals segment is expected to grow a robust 2.8% year over year in 2021. Demand of pharmaceutical and personal care products is anticipated to increase consumption by 3.2% between 2020 and 2021, giving the combined phosphates market year over year growth of 2.9% in 2021.

The growing requirement of food owing to the growing population coupled with decreasing arable land is benefiting the market of to enhance the yield of the crop production in the long term.

Key players in the global phosphates market are focusing on expanding their production capacities by setting up new production units especially in emerging economies. They are also focusing on strategic mergers and acquisitions to enhance their market presence increasing their annual turnover. Key players are focusing on backward integration to optimize productivity.

What is the demand outlook for the phosphates market?

What is the current valuation of the phosphate market?

What is the volume-based outlook of the phosphate market?

At what rate did the phosphate market grow in the last 5 years?

What is the share of the top players in the phosphates market?

The Mosaic Company, OCP Group, PhosAgro, Ma’aden-Saudi Arabian Mining Company, and EuroChem cumulatively account for 52.4% of the global market in 2021.

What is the North America phosphates market outlook?

At what rate will phosphate sales increase in Europe?

The Europe market is projected to reflect a 1.9% CAGR through the assessment period.

What are the key statistics of the South Korea and Japan phosphates markets in 2021?

South Korea and Japan cumulatively account for 1.5% of the global market.

Who are the key exporters of phosphates in the global market?

Morocco, China, Jordan, and Russia are the leading exporters of phosphate products.

Who are the key producers of phosphates in the global market?

China, Morocco, the U.S., and Russia are the top producers of phosphates.

What are the key trends prevailing in the phosphates market?