Plant-based tuna sales is poised to surge especially on account of the rising flexitarian population. As consumers are moving away from meat and seafood consumption, they are looking for plant-based alternatives with similar taste and texture. This has been creating lucrative prospects for the expansion of the market. While growth is likely to be hampered in near-term assessment period, following decelerated sales across hotels, restaurants, and cafes amid COVID-19 crisis, Future Market Insights (FMI) predicts that recovery is on cards. Shift in consumer preferences and rising focus on health and wellness are deemed to drive plant-based tuna market sales in the next decade.

Driven by the rising adopting of vegan and flexitarian lifestyles, the global plant-based tuna market is showcasing impressive growth.

Rising environmental concerns and increasing cases of sea-food allergies are encouraging consumers to choose plant-based tuna. Furthermore, the exponentially rising demand for alternatives for dietary products is giving tailwinds to plant-based tuna sales across the globe.

Consistent efforts by plant-based tuna manufacturers to mimic the texture, nutritional value, and taste of animal-based products are pushing the growth of the market. According to Future Market Insights (FMI), the plant-based tuna market will exhibit 17.9% CAGR between 2020 and 2030.

With growing health awareness, an increasing number of consumers are opting for natural and healthy food products over animal-based products. Plant-based foods are not only nutrient-rich but are manufactured with minimum or zero additives. This prevents consumers from gaining weight and controls cholesterol, and blood pressure. Besides this, plant-based tuna is rich in fiber, which improves digestion. Plant-based tuna also offers protection against cardiovascular diseases and obesity. As a result, the consumption of plant-based tuna is increasing due to the cognizance of its health benefits is aiding the market growth.

An increasing number of consumers have begun adopting a plant-based diet with occasional consumption of meat. This is recognized as a flexitarian diet, which is often deemed more feasible by consumers than shifting to a complete vegan or vegetarian diet.

According to a Yale University report, more than half of Americans are willing to eat more plant-based meat alternatives. The same report says that one in every four Americans are willing to eat lab-grown meat than conventional alternatives. Concerns pertaining to environmental and health challenges are motivating consumers to pursue plant-based options. This has been causing a rise in the flexitarian demographics. This is expected to fuel the demand for plant-based tuna in the coming years.

Market leaders are introducing unique products to fuel demand among consumer across the globe. They are working on creating blends that have taste and texture similar to canned tuna, with ingredients that come with a long list of health benefits. Efforts are underway to formulate a light, flaky texture, and a fishy flavor that doesn't overwhelm the senses.

Driven by changing consumer preference, an increasing number of restaurant and popular food chains are including plant-based food products in their menus. For instance, Gathered Foods, one of the prominent makers of plant-based seafood embarked into the restaurant industry through collaboration with Veggie Grill. Following this, Veggie Grill announced adding limited edition and exclusive tuna melt in its menu since October 2020.

Furthermore, owing to the rising demand some of the leading brands are beginning production of plant-based tuna. For instance, in August 2020, Nestlé announced its most innovative product release, a plant-based tuna, Vuna. This is the company's first seafood alternative product which was planned to be made available first in Switzerland.

The global plant-based tuna market is one of the markets that have gained during the COVID-19 pandemic significantly. The market experienced some challenges due to the restrictions imposed by the governments. But, it is projected to have long-term benefits from the pandemic.

Because of the crisis, the fear of infection from animal-based products made consumers shift to natural diets. Medical studies also proclaimed that the coronavirus disease has a powerful influence on people with health conditions like diabetes, hypertension, and heart disease. As a result, leading market players reported a rise in sales of plant-based tuna because of the pandemic outbreak. This additionally made manufacturers and distributors change their strategies to meet the unexpected demand for plant-based tuna.

Health concerns prompted consumers towards a plant-based diet. Owing to this, such a sudden increase in demand also posed a burden on manufacturers to ensure the nutritional values of their products.

As health concerns drove consumers towards plant-based products, maintaining high nutritional value without compromising the taste and texture of plant-based tuna has become a major challenge for manufacturers. Besides this, determining appropriate sugar and salt proportion considering various health issues is limiting market growth. Furthermore, high prices of products are expected to pose a challenge for the industry.

As soy and pea are rich in protein content and give a texture similar to that of tuna, they are prime sources of plant-based tuna. Sensitivity towards soy causes hyper reaction of immune system and even sometimes leads to anaphylaxis, which is a medical emergency. There is a consistent rise in population that is sensitive towards soy and peas. This is hampering the growth and has further posed a burden on manufacturers to produce allergen-free plant-based tuna.

Europe has emerged as an attractive market for plant-based tuna in the last few years. Consumers across Europe are hugely informed about soaring environmental concerns. As a result, plant-based tuna popularity is rising consistently in the region. Growth recorded in the region is also attributable to the health and environment initiatives proposed by the European Union (EU). For instance, initiatives adopted for the promotion of products that are free from genetically modified organisms (GMO) is further encouraging the growth of labeled plant-based products including plant-based tuna. 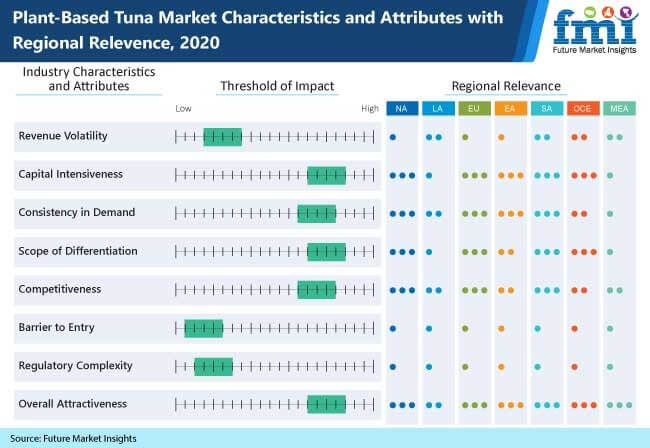 North America is has emerged as a lucrative market for plant-based tuna. The region exhibited growth across both manufacturing sectors and distribution channels. The rising demand for soy protein for sports and nutrition products by athletes, bodybuilders, and recovering patients is driving the growth of the region. Additionally, the weight-conscious category is also growing in North America. This makes protein the main constituent ingredient which is, in turn, fuelling the demand for plant-based tuna in North America. The demand has further surged due to a huge lactose intolerant population in the region.

The Asia Pacific market has been exhibiting growth at a higher rate than other regional markets. Rising health-consciousness is the principal reason for the increase in adoption of the plant-based diet in Asia Pacific. Social media is playing a major role in the promotion of plant-based products in Asia Pacific. Countries such as Philippines, Thailand, and Malaysia are some of the major users of social media in the world. The surge in videos revealing torture on animals in the dairy and meat industries is one of the causes behind the quick uptake of veganism in such countries. This is, in turn posing a positive impact on the plant-based tuna market.

Based on source, the soy-based protein segment is expected to remain dominant through the forecast period. This segment accounted for 37.2% of the total market share in 2020 in terms of volume. Growth witnessed in the segment is attributable to widespread use of soy as a base ingredient for plant-based tuna. It's highly used owing to its high protein content and meat-like texture. However, increasing allergies caused by soy are forecast to affect the growth of this segment.

Based on format, the frozen segment is forecast to witness a surge through the assessment period. With growing awareness among consumers, a rise in demand for plant-based tuna from the frozen aisle is anticipated to drive the growth of the segment. Besides, premium offers by retail stores on the products from frozen aisles are drawing the attention of consumers which is, in turn, promoting the growth of the market.

The demand for plant-based tuna is consistently rising encouraging several newcomers to venture into the market. Consequently, competition is increasing in the market. Established companies are focusing on strategic collaborations to gain a competitive edge.

Furthermore, growing cases of allergy and health issues and changing consumer preferences have compelled the manufacturers to collaborate with various research and development (R&D) companies.

For instance, Atlantic Natural Foods, a leading brand, offers a unique combination of flavor and texture in their products which is the outcome of the company’s growing R&D investments.

Leading players are also adopting market strategies such introducing home deliveries. For instance, Good Catch Foods, producer of plant-based seafood, has now made its products directly available to consumers. The home delivery service can be availed by those who are based in the USA. Such value-added consumer services are intended towards creating a brand identity.