Vaccines: Vaccines an antigenic substance prepared from the causative agent of a disease or a synthetic substitute, used to provide immunity against one or several diseases

Insulin: Insulin is a peptide hormone produced by beta cells of the pancreatic islets

Adrenaline: Adrenaline, also known as Epinephrine is a hormone extracted from animals or produced synthetically for medicinal purposes

Opioids: The opioids covered in this report include prefilled syringes drug molecules used in the treatment of opioid overdose

The research report on the global prefilled syringes drug molecules market shows that among these drug classes, vaccines and insulin are expected to stay in a close competition during the forecast period. However, with a little difference, vaccines leads the market with a projected revenue of over US$ 23,200 Mn by the end of 2027. Insulin stays ahead in the race in terms of higher growth rate. The insulin segment is expected to register a CAGR of 6.6% during the forecast period. 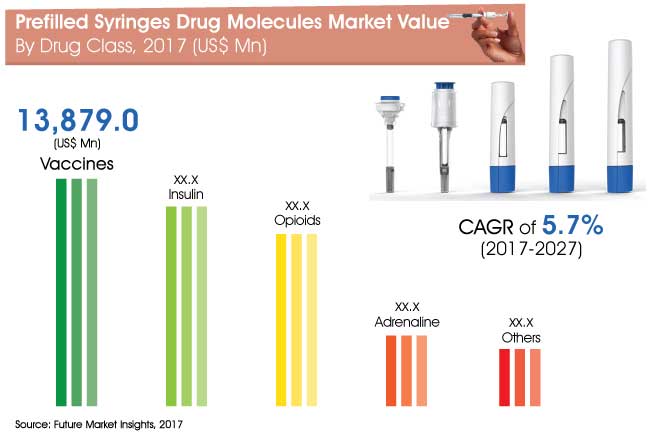 Prefilled syringes provide inexpensive home setting medication and reduce time consumed at in-patient and out-patient care units. For patients requiring frequent dose administration on a weekly and daily basis, the use of prefilled syringes drug molecules reduces the average cost per injection, when compared to vials and ampoules. There is also a decrease in the reliance on health care professionals in many regions, and this is also likely to boost global market revenue growth.

North America is projected to be one of the most important regions for prefilled syringes drug molecules. However, North America is also experiencing drug shortage in rapidly increasing frequencies, which has been tracked by both American Society of Health-System Pharmacists (ASHP) and the US FDA. This has caused a difficult situation for health care facilities, patients and health care federal regulations. Companies are losing potential market revenue due to drug shortage. FDA has revised and updated the extended use date of drugs owing to the ongoing drugs shortage.