Regulations regarding emission control of vehicles are getting stricter by the day. Growing concerns regarding the use of cleaner and greener energy is the key factor driving the global refinery catalyst market.

Additionally, rising need for transportation owing to ever increasing global population is also emerging as one of the major drivers of the refinery catalyst market worldwide. The improving access to aviation and other automotive transportation options to the general public also is expected to act as a chief driver of the market.

According to Future Market Insights (FMI), the global refinery catalyst market is projected to grow at a CAGR of 4.2% over the forecast period 2020-2030. The market is expected to show sustainable growth and reach market value of more than US$12 Bn by the end of 2030.

Increasing demand for fuel with high octane number is witnessed in the market. This might lead to growth of refinery catalyst market. Octane number signifies the quality of the fuel. Higher the octane number, better the fuel.

High octane number fuels generate more energy with same amount of fuel. Also, they help in preventing wear and tear of the engine of the vehicle.  Owing to these properties, high quality fuels that can increase the life of machines and vehicles are witnessing a surge in the market.

Population around the world is increasing, which has resulted into increased transportation needs. The rising number of vehicles on road are increasing the amount of pollutants released in the environment. Governments across the world are taking cognizance of this and bringing in stricter regulations to lower the emissions from the vehicles.

This is prompting manufacturers to opt for improved refining process. Refining catalysts are capable of reducing the pollution created by diesel-powered and gasoline powered engines.

Furthermore, refinery catalysts help in saving the environment by finding application in production of renewable fuels from biomass.

These measures help both end users and manufacturers and are expected to boost the demand for refining catalysts in the future.

The global refinery catalyst market is consolidated, competitive, and dominated by large players. These key manufacturers rule the market on the basis of good product offerings, large supplier base and a strong business network.

Small scale players and new entrants in the market face a tough competition from these key manufacturers as bigger players enjoy the advantage of a greater brand value and image that distinguishes them.

Also, the expansion strategies employed by these companies to reach out to the regional markets poses competition to the regional players. Competitive trends prevailing in the market might threaten its growth prospects. Additionally, faster adoption of renewable energy sources may hamper the market and prove to be a challenge for the established companies and new entrants alike.

North America refinery catalyst market is expected to record CAGR of more than 2% by the end of forecast period 2030. The market is projected to reach more than US$ 3Bn with increasing opportunities in the region owing to rising use of petroleum feedstocks in the industries. 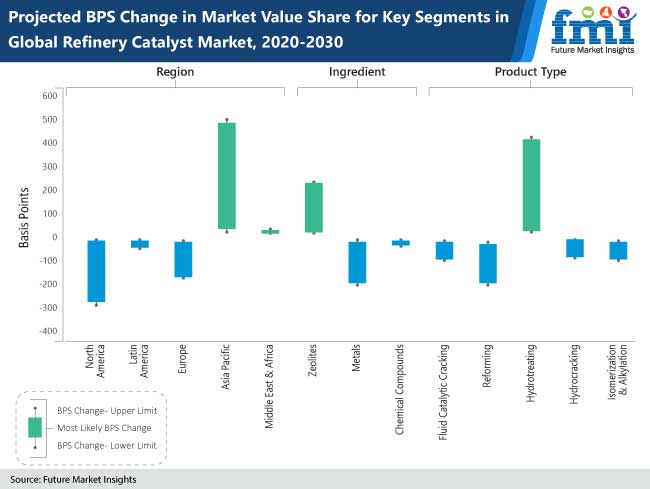 Countries such as Canada and the U.S. are leading the market, pushing North America to cover nearly 1/3rd of the global refining catalyst market.

Europe market for refinery catalysts is projected to reach US$ 2 Bn by the end of forecast period 2020-2030. The region is witnessing surge in investment in the fuel industry in response to the rising demand from various sectors. Countries such as Germany, France, Italy, and the U.K. are investing in the refining catalysts market, which is expected to rise at 2.5% CAGR in the next decade.

APAC is projected to dominate the refinery catalysts market during the forecast period 2020-2030.rising population, increase in the industrialization in the region, stricter government regulations with respect to environment are few key factors responsible for the overall growth of the industry. Also, the increase in oil production capacities in developing countries is providing sustainable growth opportunities in the region.

Owing to these factors, the region is expected to be the most lucrative one in the next decade with CAGR of 4.8%. High growth rate and huge market share are projected to contribute to the increase in market value of refining catalyst market in the region which is expected to reach around US$ 6Bn mark by the end of 2030.

It is followed by hydrotreating, which is projected to grow significantly over the forecast period 2020-2030. Hydrocracking is expected to show significant growth by the end of 2030, along with other product types such as reforming and isomerization and alkylation.

In terms of ingredient, the refinery catalysts market is classified into zeolites, metals, and chemical compounds. Zeolites are expected to be the most lucrative segment during the forecast period, reaching CAGR of around 4% by the end of 2030.

Zeolites find high usage owing to their porous structure which allows them to work selectively on particular molecules. These shape selective catalysts are projected to cover half of the market compared to other ingredients.

Several companies are operating in the global refinery catalyst market. This makes it very competitive. Key manufacturers are focusing on expanding their footprint in the market through networking and strengthening their supplier base.

Also, product innovation and new product launches are some of the strategies employed by players in the global refinery catalyst market in order to gain advantage over the competition.

Furthermore, gauging at the way e-commerce is becoming a part of the overall market, players are focusing on developing business through by increasing their digital presence.

For instance, Albemarle Corporation has launched a new technology for fluid catalytic cracking (FCC) catalyst called ‘the granite’. The granite technology platform is based on a novel matrix system which enables refiners to maximize their profitability. This high profitability is achieved due to several factors such as better bottoms upgrading, improvement in coke selectivity and higher zeolite stability.