An Incisive, In-depth Analysis on the Ring Pull Caps Market

The soft drinks end-use segment follows the beer segment in terms of market share in the global ring pull caps market. Some of the global leaders of the soft drinks industry, such as Pepsi Cola and Coca Cola, are promoting their products by replacing the traditional crown caps with ring pull caps. The glass bottles are majorly preferred by the beverage producers due to highly aesthetic packaging solution. Although, the beverage producers are gradually shifting to metal cans and PET bottles due to various disadvantages associated with the glass bottles, limiting the ring pull caps demand for the soft drinks. 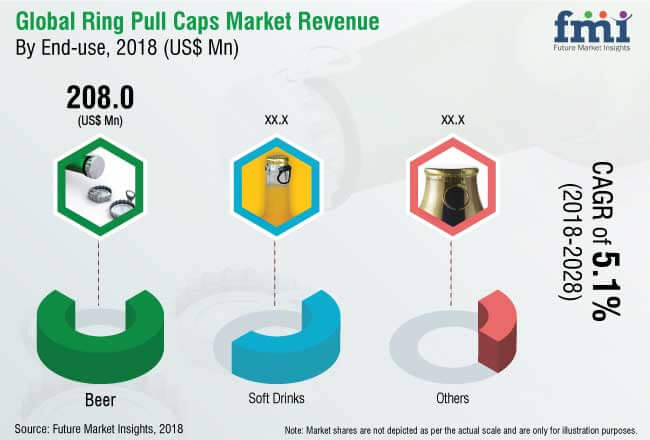 This report provides forecast and analysis of the ring pull caps market at the global level. It provides historical data of 2013-2017 along with forecast from 2018 to 2028 in terms of revenue (US$ Mn) and volume (Units). The report also includes macroeconomic indicators along with an outlook on packaging demand, beverage packaging market outlook, metal caps & closures market outlook and comparison between metal and plastic caps & closures. In addition, it includes global drivers, restraints and recent trends of the ring pull caps market. The report also comprises the study of opportunities for ring pull caps manufacturers and also includes detailed value chain analysis.

In order to provide users of this report with comprehensive view of the market, we have included detailed competitiveness analysis and company players with their SWOT analysis and strategy overview. The dashboard provides detailed comparison of ring pull caps manufacturers on parameters such as product offerings, total revenue, target regions, key differentiator and headquarters. The study encompasses market attractiveness analysis by material, cap diameter, end-use, and region.

On the basis of cap diameter, the global ring pull caps market is segmented into 26 mm and other sizes segments.

On the basis of end-use, the global ring pull caps market is segmented into beer, soft drinks and others segments.

A number of primary and secondary sources were consulted during the course of the study. Secondary sources include Factiva, World Bank, Packaging Digest, Hoover’s, and company’s annual reports and publications.