Awareness regarding benefits of opting for nutritious food and healthy lifestyles is increasing across the globe. Health-conscious consumers are concentrating on exercise and weight management to reduce risk of health diseases and disorders such as diabetes, cholesterol level, blood pressure, and heart diseases. Many health-conscious consumers focus only on exercising and neglect to ensure required protein intake, due to which they suffer from various deficiencies.

To avoid deficiencies and to maintain healthy lifestyles, consumers are consuming more protein-based products over calorie-based products.  Shrimp is a rich source of vitamins, minerals and proteins as well as it contains low amount of calories. Due to its nutritional benefits the consumption of shrimp products is rising. Demand for shrimp among consumers, to prepare seafood at home and even while ordering seafood in restaurants, has increased as these are available at cheaper prices and have high nutritional content. On the other hand, other seafood products such as salmon, tuna, crabs, lobsters, etc. struggle to hold a higher market share due to increasing prices and lower supply

Use of shrimp is rising in restaurants and hotels as consumers prefer healthy and tasty dishes. Shrimp is high in proteins and low in calories, and the various health benefits associated with it, due to which demand for shrimp-based food dishes is growing rapidly. Restaurants attract consumers by offering unique and nutritious shrimp-based dishes. Restaurants and hotels offer various innovative, tasty, and healthy shrimp-based dishes such as shrimp kebabs, shrimp dumplings, coconut shrimp, and shrimp fried rice, and shrimp Thai soup.

Chitosan is an amino polysaccharide prepared by processing shrimp waste (shell) which involves partial deacetylation of chitin. Chitosan is the second most abundant natural polymer. Many biochemists have found that chitosan is biocompatible, biodegradable and non-toxic, which gave it wide applicability in conventional pharmaceuticals as a potential formulation excipient. Synthesis of chitosan is suitable for the pharmaceutical industry, especially in designing of delayed and controlled drug delivery systems. Chitosan is widely used in pharmaceutical industry, due to which the demand for shrimp is increasing across the globe.

Seafood industry continues to fear the pile-up of stocks, driven by export setbacks during the COVID-19 pandemic. Shrimp has been a flourishing sector and was in fact suffering in the recent past, owing to falling prices and oversupply. Shipments have been seeing a slowdown, supply chains remain disturbed, consignments to key consumer countries like China have dropped heavily due to port congestions, and uptake at foodservice facilities continues to sink. Exports are also sluggish in the light of continued lockdowns and mobility restrictions. The impact will be harsher on demand for shrimp in near term. Moreover, a sizeable consumer population is still reluctant about the safety of wet markets.

Leading shrimp producers are focusing on research and development to produce unique products. Key companies are focusing on acquisition and mergers to increase geographical reach and to broaden product portfolio. In response to coronavirus outbreak and the consequent business restrictions, exporters in the global shrimp market have offloaded their shrimp stocks that were originally destined for key consumer markets.

Demand-supply imbalance particularly in the foodservice sector is denting the revenue pool of shrimp market operators. On the other side, retail markets are stockpiling frozen shrimp and related products to leverage the shortages of fresh shrimp that would probably last for a while.

Health benefits of shrimp include improved bone and brain health, weight management, and a lowered risk of cardiovascular disease. Shrimp has anti-inflammatory, and anti-aging properties that help to reduce the risk of various health ailments. It helps in treating age-related macular degeneration and relieving eye fatigue. It also provides relief from menstrual pain. Shrimp is a high-benefit option for increasing consumers’ overall health in a truly delicious way. The awareness of health benefits associated with shrimp is rising due to which the demand for shrimp is rising rapidly across the globe.

The increasing awareness of health and wellness and fast paced life across the globe is driving demand for seafood snacks products to be consumed on a daily basis. Manufacturers are launching various innovative shrimp snack products, such as chips, wafers, popcorns, biscuits, and crackers, in various flavors. Demand for shrimp snack products is increasing due to the wide variety, easy availability, and nutritious profiles.

Along with food industry, the shrimp is used widely in pharmaceutical and cosmetic industry. Shrimp is used in anti-aging and sunscreens as it contains a carotenoid called astaxanthin, which is a powerful antioxidant that can greatly reduce the signs of aging in the skin related to UVA and sunlight. It improves chances of beautifying skin and shedding years from time-worn faces. Shrimp is used in hair fall shampoos as it contains minerals, such as zinc, which help to reduce hair loss. Due to these properties, major manufacturers of cosmetics are planning to use shrimp in their products. 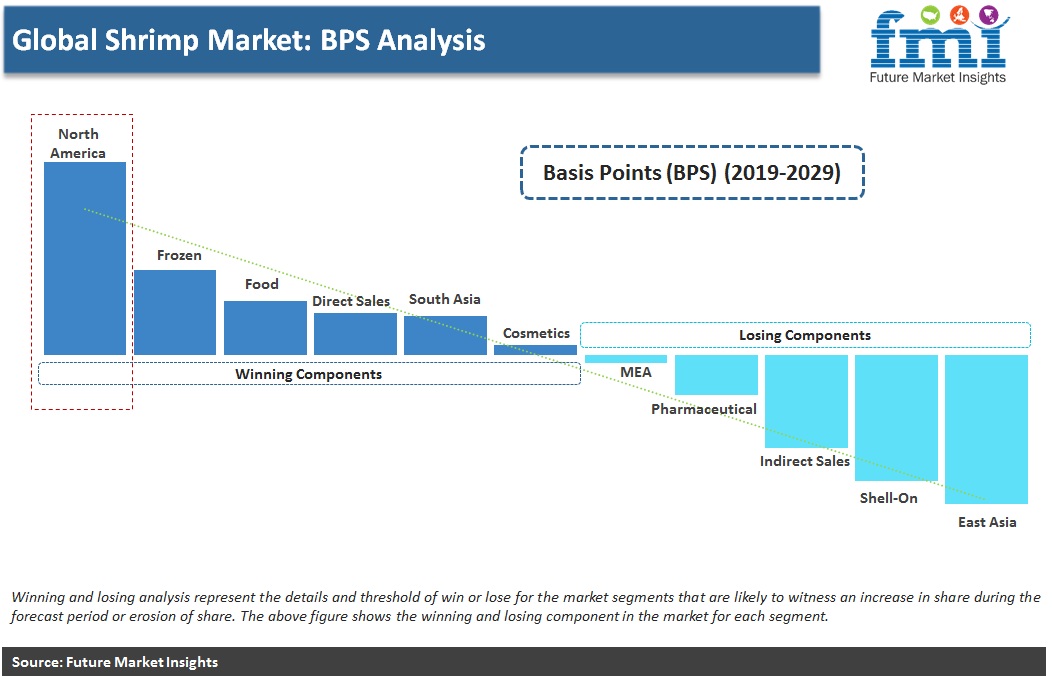 A recent market study published by Future Market Insights on the shrimp market offers global industry analysis for 2014-2018 & opportunity assessment for 2019-2029. The study offers a comprehensive assessment of the most important market dynamics. After conducting a thorough research on the historical, as well as current growth parameters, the growth prospects of the market are obtained with maximum precision.

The global shrimp market is segmented in detail to cover every aspect of the market and present complete market intelligence to readers.

The executive summary of the shrimp market includes the market country analysis, proprietary wheel of fortune, demand-side and supply-side trends, opportunity assessment, and recommendations on the global shrimp market.

Profit margins at each level of the shrimp market are analyzed and readers can find detailed information on top importers and exporters as well as the value chain of the market.

Based on nature, the Shrimp market is segmented into organic and conventional. This section also offers market attractiveness analysis based on nature.

Based on form, the Shrimp market is segmented into canned, breaded, peeled, cooked & peeked, shell-on, and frozen. This section also offers market attractiveness analysis based on form.

This chapter provides details about the shrimp market on the basis of distribution channel, and has been classified into direct sales and indirect sales. Indirect sales is further segmented into modern trade, specialty food stores, convenience store, wholesale stores, discount stores, online retail, and other retail formats. In this chapter, readers can understand market attractive analysis based on sales channel.

This chapter explains how the Shrimp market is anticipated to grow across North America, Latin America, Europe, East Asia. South Asia, Oceania and the Middle East and Africa.

Readers can find detailed information about several factors, such as the pricing analysis and regional trends, which are impacting growth of the shrimp market in the Latin America region. This chapter also includes growth prospects of the shrimp market in leading LATAM countries such as Brazil, Mexico, Euclador, Peru, and the Rest of Latin America.

Important growth prospects of the shrimp market based on its application in several countries such as Germany, France, U.K., Spain, Italy, BENELUX, Nordic, Russia, Poland, and Rest of Europe are included in this chapter.

Important growth prospects of the shrimp market based on its application in several countries such as China, Japan and South Korea are included in this chapter.

This chapter includes a detailed analysis of the growth of the shrimp market in the South Asia China region, along with a country-wise assessment that includes India, Thailand, Malaysia, Singapore, Indonesia and Rest of South Asia. Readers can also find regional trends, regulations, and market growth based on applications and countries in the South Asian Countries.

Important growth prospects of the shrimp market based on its application in several countries such as Australia and New Zealand included in this chapter.

This chapter offers insights into how the shrimp market is expected to grow in major countries in the MEA region such as GCC Countries, South Africa, and the Rest of MEA, during the forecast period 2019-2029.

In this chapter, readers can find detailed information about tier analysis and market concentration of the key players in the shrimp market along with their market presence analysis by region and product portfolio.

This chapter includes a list of acronyms and assumptions that provide a base to the information and statistics included in the shrimp report.

This chapter helps readers understand the research methodology followed to obtain various conclusions, as well as important qualitative and quantitative information, on the shrimp market. 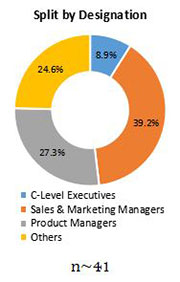 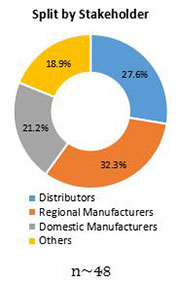 To Learn More About our Comprehensive Perspective on Shrimp Market,