Role of data and IoT in transportation sectors including railways has not confined to accounting, logistic and shipping management, managing resources, but has integrated in day to railway operation. Such functions include scheduling, run trains safely, measuring economic benefit etc., to mention a few.

At pace with technology adoption by rail operators, IT solution providers have also enhanced their offering for engaged stakeholders. Integration of virtualisation, bespoke asset management software, analytical and predictive modelling has surfaced as regular business function that necessitates effective IT solution.

Need for these smart railway solution will receive increased traction, as railways transition to semi-autonomous transportation over the next ten year. Meanwhile, railway operators are experimenting with smart railways solutions to offer a seamless and safe transportation experience. Rail operators use analytical software to forecast the likely breakdown, and accordingly fix the problem in advance for a better and safer passenger experience, as well as enhancing the overall efficiency for the operator.

Asset management is another critical sector where these smart railway solutions are being used and implemented. Integrated modules of predictive and analytical tools are in use by railways to map likely spike in demand volumes and accordingly optimize capacity and mobilize resources.

Collectively these developments are well synced and aligned to fast track the adoption of smart railways across the industry, resultantly northward trend in market revenue anticipated over the forecast period 2020 – 2030 for global smart railways market.

Smart railways are expected to play a critical role in improving coal and electricity consumption in operating this giant machinery. Reducing the financial costs by achieving energy efficiencies has also been identified as a primary cause in adoption of railways.

In light of this, railway industry stakeholders are undertaking comprehensive measures to prevent noise pollution wherever possible. For instance, solution providers are offering vibration generative alarms that can be integrated into a train’s existing infrastructure to notify the commuters about its arrival. Consolidation of such ecological solutions into a single system helps tackle environmental issues are thus driving the adoption of smart railways.

Development of smart railways to make them safer for aged and the differently abled has been the top priority of governments across the globe. Committing and delivering the promise of safe and affordable means of transported has prompted the investments in upgrading the existing railway infrastructure with smart railways. Features such as infrared sensors for accurate human detection on bridges to minimize the accidents are expected to favor market growth.

Furthermore, use of technology to help differently abled individual use platforms and bridges with utmost safety will also make the case of smart railways stronger in the coming ten years. Future Market Insights predicts that research and innovation in smart railways technology can help ensure trade-off between actions needed in favor of ensuring greater safety and easy access to trains given the complex network of railways.

Smart Passenger Services to Enhance Attractiveness for the Commuter

Smart passenger services support a wide range of commuter services, such as provision of convenient ticketing methods, digitization of passenger identity data, intelligent navigation, and personalization of information services, among others. As all of these collectively aim towards saving time and better record-keeping, consumers are expected to opt for smarter ways of using railways by the end of 2030.

Smart railways with intelligent services that will consider commuter demands for optimized goals will bode well for the market. Intelligent navigation services that will offer commuters accurate updates about train schedules, weather, and consignment support, and decision assistance are expected to drive the growth of this market as governments are looking at infrastructure expansion.

COVID-19 has adversely affected many countries worldwide, resulting into negative impact on the global economy. The pandemic has driven most of the affected nations into shutdowns, restricting their commercial and industrial activities. Resultantly, new investments in smart railways has been impeded.

The mandatory lockdowns legislated across nations had put a halt of public transportation, as governments strive to tackle the ever-rising rate of COVID-19 infections. In order to combat COVID-19, governments in countries like India and China have frozen R&D and procurement funding across multiple sectors, including railways.

As the global economy heals, the investments in R&D and procurement of smart railways technologies is likely to resume.

Smart railways solutions and service providers are focused on deploying their products in Europe as the European Union, along with Russia, constitute the world’s longest railway network. Also, Europe hosts some of the leading players operating in the global smart railways market, which has given this regional market an edge over others. 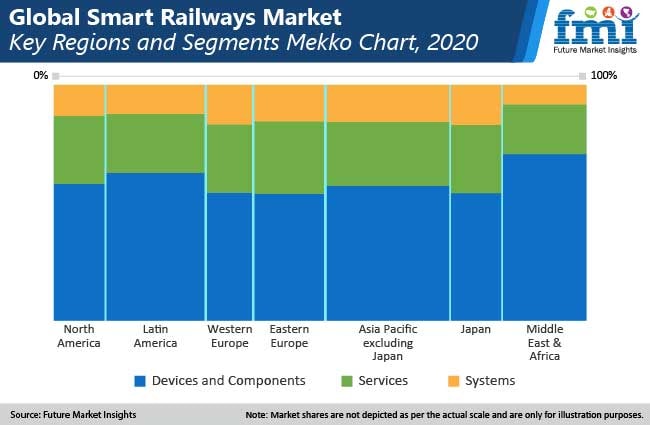 High demand for smart devices and components, such as rail sensors, video surveillance cameras, smart cards, and other networking and connectivity devices that complement smart railways, is being observed across Latin America and the Middle East and Africa. Further, the cost of professional cloud integration services in these countries is likely to decrease during the forecast period.

The market value of smart railways in Asia Pacific excluding Japan is likely to increase at the fastest rate, among all the regional markets. The swift growth may be attributed to the increasing demand for assembled smart railway systems like Railway Traffic Management System (RTMS), Passenger Information System (PIS), and ASMS. High population and the consequent demand for safe and efficient transportation modes is one of the key factors propelling the adoption of smart railways in the region.

Key players operating in the global smart railways market are deploying products that accelerate digitization in the railway sector. Companies like ABB are focused on developing relationships with foreign governments in order to enhance the attractiveness of their solutions on a global level. For instance, ABB and Indian Railways announced a partnership in February 2019. As per the agreement, Indian Railways has awarded a contract to ABB for manufacturing and supplying smart converters for electric locomotives. Other key players are undertaking mergers and acquisition strategies in order to expand their product portfolio and extend its reach towards emerging economies.

Following are some promising players that are estimated to lead the technical innovation to complement smart railways over the coming years:

Global Smart Railways Market: Trends to Watch Out For

The global Smart Railways market is segmented in detail to cover every aspect of the market and present a complete market intelligence approach to readers.