[227 Pages Report] Global tablet shipments are expected to grow at a 9.1% CAGR through 2026, according to a recent analysis. By 2026, the global tablet market is anticipated to be worth over US$ 600 billion.

Android tablets will grow at the fastest rate during the projected period of 2016-2026 due to their low price and increasing popularity.

Total tablet shipments are expected to exceed 455 million units in 2017.

Apple Inc. continues to dominate the global tablet market. In 2016, it had a revenue share of about 26% of the global market.

Detachable Tablets: The Next Growth Opportunity

Slate tablets shipments were pegged at nearly 243 million units in 2016. While slate based tablets will continue to account for higher sales than detachables, the latter will grow at a higher CAGR during the forecast period. Detachables are witnessing increasing demand from the IT sector, as PCs are being slowly phased away. Detachable tablet sales volumes are projected to increase at 10.8% CAGR vis-à-vis 7.7% CAGR of slate tablets.

The growing proliferation of laptop-tablet hybrids is eating into the markets share of tablets. The ever-increasing size of smartphones is not helping the cause of the tablet industry.

Another key factor that can impede the growth of the market is low upgrade cycle. As is the case in the smartphone segment, consumers are not showing the same level of eagerness to upgrade their existing tablets. Long replacement cycles can restrain demand for new tablets during the forecast period.

Screen size is an important buying decision for consumers, and as above 6-inch smartphones become ubiquitous, tablet vendors are finding it difficult to promote size as their USP.

In 2016, over 191 Mn units of tablets less than 8 inch in size were shipped globally, whereas sales of above 8 inch tablets were pegged at over 227 million units. In terms of both value and volume, less than 8-inch tablets are projected to witness a higher CAGR during the forecast period.

The Silver Lining for Tablet Vendors 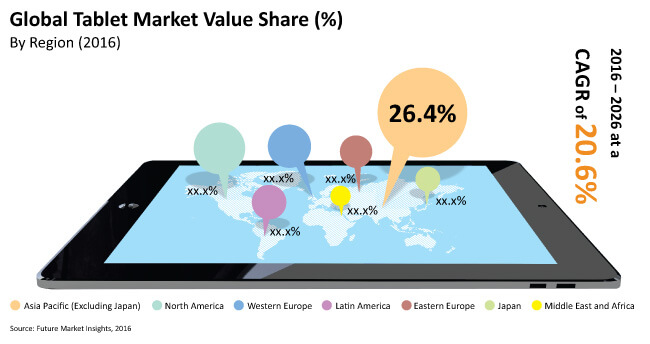 Although 2016 was a sluggish year for the global tablet market, it is expected that demand will pick up in the latter half of 2017 and 2018. China and India are anticipated to remain key to the future growth of the tablet market, as a significant percentage of consumers are yet to make the transition from a ‘mobile phone’ to a smartphone.

Bigger display sizes can be a luring factor for brands, as in the smartphone segment, above 6-inch phones come with a hefty price tag. Consumers in Tier II and Tier III cities in India use their phones to watch movies and videos in the absence of a PC. Catering to this consumer segment can open up opportunities for vendors; however, vendors should keep in mind that this demographic is extremely cost-sensitive. Owing to lower profit margins, vendors will have to focus on high-volume strategy to gain significant gains.

What is the outlook of Global tablet shipments market?

Which prominent players are currently operating in the global tablet market?

Fiber To The Home Market