Among the globally consumable alcoholic drinks, wine comes in the third position after beer and spirits. The consumption of wine is increasing across the globe, and the demand is mainly from the younger generation. Drinking of wine helps to improve mental & heart health and fights with some kinds of cancers. Furthermore, presence of wine related products, which is incorporated with newly developed flavors is expected to propel the growth of wine barrels among the manufacturers.

In developing economies, number of wine producers are increasing rapidly, specifically in China, Japan, and India due to high demand for premium wines and locally generated flavors by the manufacturers. Overall the global outlook of wine barrels is expected to remain positive during the forecast period. Manufacturers are focusing on increasing the production of wine barrel for ensuring proper order and supply across the globe. This has headed to increase in petition of wine barrels.

According to Ireland Brewing Trade body, low and non-alcoholic drinks such as M&S Kendermann’s Merlot, and Rawsons Retreat Cabernet sales are thriving in European countries like France, Ireland, Poland, the U.K., and the Netherlands, supporting the wine barrel market growth in the region. Low alcoholic drinks offer unique and high quality tastes with lesser amount of alcohol content, in the range of 0.5 to 2.0%. In the U.S., around 52% of adults who drink alcohol are either going for low alcoholic drinks or have tried to reduce their alcohol intake.

Low alcoholic beverages are gaining traction in Asia Pacific, majorly owing to their low calorie content, occasional suitability, and the fact that health concern consumers are increasing rapidly. Besides this, through advertisements and media publications, people are becoming aware of the health and adverse effects caused by drinking strong alcoholic drinks regularly. 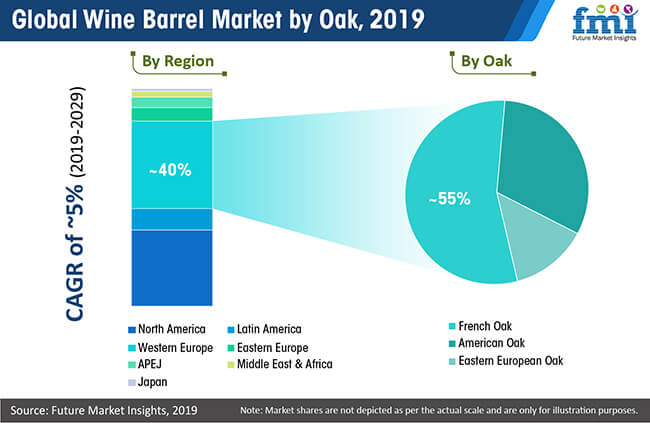 Oak wine barrel alternatives such as oak staves, blocks, chips, and powders are becoming more prevalent among newly developing wineries. Wineries are adopting several practices that includes the used barrels with their interior shaved or re-toasted or using the same used barrel for more extended period. Oak alternatives are more convenient to use which helps in adding textures during fermentation process. Adoption of expensive French oak wine barrel is practically unaffordable for small-sized wineries.

Considering the consumers’ inclination towards less ‘oaky’ wines, manufacturers are also aging their wines using alternatives like cubes, chips and powder tannins. Barrel substitutes are cheaper than wine barrel because less skilled labors are required. In addition, they are generally made of staves, which are rejected during wine barrel manufacturing. Therefore, oak barrel alternatives are making wine affordable, which is hindering wine barrel market growth.

The global wine barrel market is segmented in detail to cover every aspects of the market and present a complete market intelligence approach to readers.