Steel pipes have become critical aspect of civil infrastructure such as water supply, sewage, automotive and oil & gas. Steel pipes can be categorized according to material into alloy, carbon, and stainless variants.

Steel pipes are rapidly gaining ground in a number of end use sectors including construction, mining, and water treatment, and industrial sector applications, particularly in the oil and gas industry which can be attributed to investments into onshore and offshore applications, particularly in the United States and Brazil. The Americas steel pipes market size is likely to grow significantly over the course of the forecast period.

Steel pipes are popular owing to superior reliability in performance and durability, coupled with a wide range of applications in the automotive, construction, and mining industries. Also, the wide range of steel pipes, particularly for oil and gas logistics, will help long term projections.

Further, the issues of corrosion in carbon steel pipes and the resultant requirements of replacements for aging pipelines will aid market growth by boosting residential and non-residential applications.

Also, further benefits such as hardness, temperature resistance, ductility, aesthetics, and lower costs of maintenance will support the market in the long term.

ERW (electric resistance welded) steel pipes have been gaining prominence across the Americas owing to new opportunities in local markets, with an emphasis on infrastructure in urban settings.

Major investments being made for buses, air travel, and rail in addition to telecommunication and energy are likely to generate major opportunities for market players.

Manufacturers are focusing on geographical and capacity expansions. Also, the demand in commercial and housing spaces has resulted in increased demand in ERW pipes. Furthermore, favorable policies by governments towards gas and energy distribution will prove beneficial in market developments.

While the Americas steel pipes market is projected to grow steadily albeit at a slow rate through 2030, steel pipe manufacturers are expected face obstacles that will restrain the potential of growth in the long term.

For instance, the high costs of installation associated with steel pipes hinder adoption rates. In addition, the Americas steel pipes market will witness strong competition from alternative pipe materials such as plastic and iron, owing to cost advantages.

Steel pipe diameters are limited owing to major cost increases for larger sizes, which in turn limits the scope of application for offerings developed by manufacturers.

The United States market for steel pipes is remain lucrative, and is anticipated to account for more than 70% of the overall market share.

Sustained economic growth in the country, supported by fiscal stimulus by the government, and the resultant increase in business confidence has played a key role in demand for steel pipes in a number of end use sectors.

Also, the United States has witnessed a substantial increase in crude oil production which has provided market players with lucrative opportunities to leverage for revenue.

The US market has witnessed significant highs and lows in the past few years, with significant growth between 2017 and 2018, with key emphasis on applications in the oil and gas sector.

However, the coronavirus pandemic has resulted in major declines in the demand for oil prices, which is projected to hurt short term prospects. However, the sector is likely to witness gradual recovery through 2021 as industrial restrictions are relaxed.

Brazil has been reflecting strong economic activity, albeit at a relatively slow pace. Industrial growth in the country, coupled with growing consumer prices in the region have been driving the market in the recent past. However, regional economic uncertainties across Latin America have affected steel production.

Also, Brazil has been witnessing a slump in terms of imports, owing to fluctuations in the requirements of finished steel products, while production of crude steel remains fairly stable. 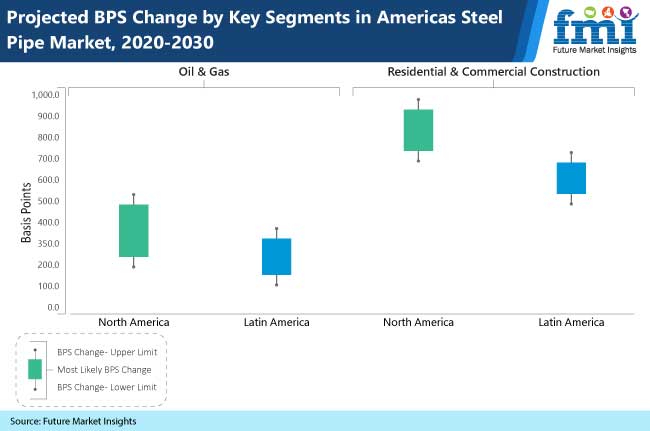 Key challenges for market players in Brazil include the continuing trade tensions between China and the United States, tight economic conditions, and reduced commodity prices.

In Latin America, Brazil is the only country that has managed to maintain a surplus of trade in terms of finished steel, with the country accounting for more than 50% of market share in the region.

Also, favorable government policies in the country will help in reducing inflation and will aid better monetary environment. The industry is likely to reflect growth through the forecast period owing to better business confidence in industrial and construction sectors through 2021.

The demand for steel pipes in Canada is notable owing to higher value in comparison to many Latin American countries. However, the country has been facing challenges in terms of significant slumps of prices in terms of crude oil, and the steady decline of demand from the energy industry.

In addition, fluctuations in the prices of steel have challenged market players in terms of sales. The market is likely to reflect a steady but sluggish growth through 2030, on the back of growing steel prices and a trend of depreciation of the Canadian dollar.

Growth will also be driven by increasing activity in domestic oil and gas drilling, coupled with revenue generation from irrigation and water supply applications for residential and commercial infrastructure development

According to government statistics the deficit between imports and exports are anticipated to steadily shrink in years to come, with 2019 valuations accounting for approximately 1.2 and 1.4 billion respectively, aiding steady growth in the years ahead.

Steel pipes are largely manufactured from 3 key materials – carbon steel, alloy steel, and stainless steel. Carbon steel pipes are projected to remain highly sought after in the Americas throughout the projection period, with carbon steel market likely to grow steadily.

The demand for carbon steel pipes can be attributed to beneficial physical and chemical attributes including resistance to corrosion shocks, low environmental impact, and minimal need for pretreatment prior to use.

Steel pipes can be categorize into seamless and welded variants. Welded steel pipes can be further segregated into ERW and SAW options. Seamless pipes are projected to hold major market share throughout the forecast period.

The demand for seamless pipes in the industry can be largely attributed to higher pressure and strength ratings and better uniformity in design, which makes it ideal for heavy duty applications such as those of the oil & gas sector, and water supply infrastructure, generating lucrative opportunities in the long term.

The use of steel pipes for in wide temperature range and for the transport of toxic substances, coupled with the characteristics of weldability, high strength, low corrosion, and high tensile strength are important for onshore and offshore operations, generating lucrative opportunities for the long term.

Steel pipe manufacturers in the Americas have been substantially impacted by the coronavirus pandemic. Consequently, market players are increasingly investing efforts in optimizing production, to match the decline in demand with reduction in production capacities and workforce gaining importance. Larger manufacturers are also investing in consolidating their presence during this period through strategic acquisitions.

ArcelorMittal has divested its U.S. assets, through a sale to Cleveland Cliffs Inc. for a valuation of approximately 1.4 billion, as steel manufacturers seek to diversify and consolidate their market presence.

The company has also revealed plans to unveil a new facility for electric arc furnace at its operations in Calvert, Alabama including hot dip galvanizing lines.

Tenaris has announced its intentions to scale back operations at the company’s melt facilities across the United States, owing to the sharp decline in the pricing of oil, and the resultant layoffs and idling of equipment including facilities in Koppel and Ambridge. The company has also announced the acquisition of IPSCO Tubulars, a major pipe manufacturer based in Houston for a value of around 1.1 billion.

Gerdau S/A has announced the reopening of operations at its Ouro Branco plant located in South Eastern Brazil at Minas Gerias which will add a capacity of 1.5 mt annually.

The company has also partnered with SKF towards optimizing productivity and cutting down downtime at the company’s Brazilian facilities. On the other hand, the plant in Saint Paul will witness substantial downsizing, owing to idling of operations in the facility.

Aside from these manufacturers, other major market players in the industry include:

The list is only indicative – full list of Americas steel pipes market key players is available upon request.