Biologic excipients product types include polymers, sugar alcohols, polysorbates, inorganic salts, amino acids, surfactants and others. Excipients are small molecules but critical part of every biologic drug. The key accomplishment in unlocking the potential for manufacturing pharmaceutical grade excipients to be used in developing biologics has been attained by initiating mass manufacturing of biologic excipients for pharmaceutical applications. An excipient being a pharmacologically inert substance is used as a delivery vehicle for APIs, or as flavor that is essential for obtaining improved palatability of medicines.

In terms of revenue, the global biologic excipients market is projected to expand at a CAGR of 3.6% during the forecast period and is expected to be valued at US$ 1,706.2 million by the end of 2028.

The ability of biologic excipients to offer increased efficacy of biologics through enhancement of solubility and bioavailability, enabling controlled/sustained release delivery performance coupled with introduction of innovative technologies focused to target pediatric and geriatric patient populations has made biologic excipients a key preference for biologic drug manufacturers. 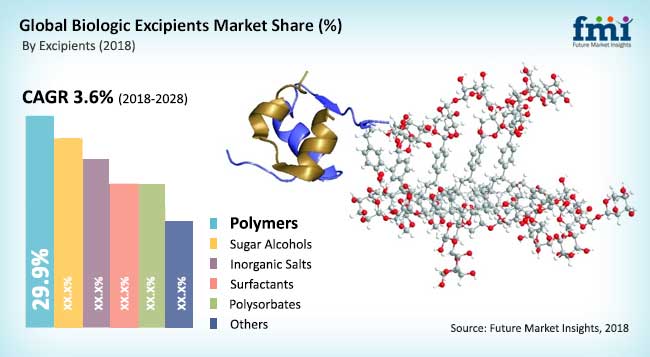 The global biologic excipients  market is segmented into seven major regions: North America, Latin America, Western Europe, Eastern Europe, Asia Pacific (Asia-Pacific excluding Japan), Japan and Middle East & Africa (MEA). In terms of value, North America is expected to be the dominant regional market by 2018 end and is expected to expand at a CAGR of 3.6% over the forecast period. Western Europe and Asia Pacific excluding Japan is expected to be the fastest growing market in terms of revenue growth in the global biologic excipients market, registering a CAGR of 3.9% and 4.2% respectively over the forecast period.

The global biologic excipients market is segmented on the basis of excipient type into: