2020 Analysis and Review: Breathable Films Market by Material – Polyethylene, Polypropylene, Polyurethane and others for 2020 – 2030

The global breathable films market is gaining significant traction amid the ongoing COVID-19 pandemic. Over the past few years people have become more conscious about their health and personal hygiene. Coupled with this, advancements in medical technologies and various healthcare facilities are resulting in increasing scope for growth of the market.

The demand for breathable films in industries such as medical, pharmaceuticals, personal care and hygiene has significantly increased in the last couple of months. Furthermore, the novel coronavirus outbreak has resulted in rising demand for the hospital disposables including gloves, PPE kits, masks and others.

Also, the global urbanization has catered to market growth as more people are getting access to the various hygienic and incontinence products such as sanitary napkins, baby diapers, adult diapers and others due to their improved lifestyle.

Breathable films have a lot of exclusive features such as it allows transportation of water vapor molecules but blocks liquid water transportation simultaneously.  Due to their properties, breathable films are widely used to keep various food products fresh for a long time to increase their shelf-lives.

As the demand of processed and packaged foods is increasing, the market growth is expected to increase further in the coming days. Non-porus breathable films are highly used in textile industries, while micro-porus films are used in a very wide range of disposable medical products. As the rising demand from these highly operational end-users tend to prevail, the market is anticipated to exhibit steady growth during the coming years.

As per the latest research report by FMI analysts, the global breathable films market is set to grow by 6% CAGR during the forecast period (2020-2030).

High absorbency being a very significant feature of the breathable films, is making it widely popular for the diverse applications. Due to the porous feature which reduces the accumulation of carbon dioxide while locking the moisture, breathable films are widely used in manufacturing diapers.

Breathable films are also used in manufacturing of surgical apparel used in hospitals and pharmaceutical centers.

Breathable films are widely used for manufacturing products such as gloves, patient gowns, and surgical gowns. The expansion of healthcare sector in India, China, and other countries across Asia Pacific is fuelling the demand for breathable films.

Another important feature of breathable films is the property of healing and wrinkle reduction for faces as the films contains billion of micro-pores which are smaller in size than the water droplets which makes wonder in the skin care products.

The main components of a breathable film include thermoplastic starch, biodegradable resin, a filler, and a protein. Breathable films are made by mineral pyrogens, mainly calcium carbonate. In the current years, manufacturers have become more inclined in producing highly breathable biodegradable film without using any inorganic pyrogens.

Basically a thermoplastic cross linked natural polymer such as corn starch is used in order to create tortuous passages accounted for film breathability. These kind of films are highly popular due to their breathability and mechanical properties.

The trend of incorporating maximum number of degradable components in manufacturing disposable products are increasing rapidly. As a result the demand for biodegradable breathable films is expected to increase further during the forecast period (2020-2030).

Despite of having a lot of exclusive properties catering to the growth of global market, there are a few restraining factors which are worth considering.

For instance, the diapers manufactured from the breathable films have a slow degradation rate which can prove hazardous to eco-system. Diapers being a major source of household waste, with more than 9.5 million kids in the United States, is a concern to address for better waste management.

As the polyethylene used in manufacturing disposable diapers contributes to 55% of the breathable films, the cons are negatively affecting the market across the countries. Polyethylene being not easily degradable, causes long term environmental impacts.

North America’s breathable films industry is a highly lucrative, backed by which the region is forecast to remain dominant in the upcoming years. North America breathable film market value is to exhibit growth by 5.7% CAGR by the end of the forecast period. 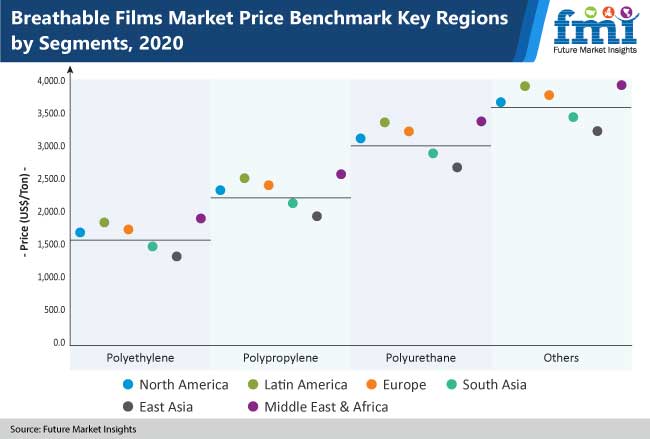 Breathable polyethylene film will hold the major market value in the material wise category in the region. The North America market is anticipated to exhibit significant growth due to the rapidly growing demand from sports, food packaging, and other industries, which need constant supply of breathable films for product manufacturing.

Europe too has emerged as a lucrative market for breathable films. The region has been exhibiting increasing demand for packaging materials. The demand is witnessed from diverse industries, including food and beverages, personal care, and pharmaceutical sectors.

East Asia too has emerged as an attractive market for breathable films. With the government in China focusing more on increasing energy efficiency, the demand for waterproof breathable films is expected to rise in the country. Request a sample  specific to East Asia market

Polyethylene is expected to lead in the material-wise category and will continue dominating the market through the forecast period. Polyethylene is available at a lost cost and is suitable for a wide range of applications. Coupled with these, technological innovations introduced to aid production of breathable films will fuel demand in this category.

In terms of film type, micro-porous breathable films are widely used due to its feature starting from personal hygienic products to the medical applications. This segment is forecast to expand at above 5% CAGR between 2020 and 2030. However, over the course of the forecast period, monolithic segment is expected to showcase a higher rate of growth, surpassing the micro-porous segment to emerge as the dominant category.

Medical industry has been the primary end user of breathable films. The medical industry will remain in the position throughout the forecast period, exhibiting a growth at above 6% CAGR between 2020 and 2030. Other than this, the market will witness rising demand from food and beverages, pharmaceuticals, and apparel industries.

The market for breathable films is characterized by the presence of several well-established companies. Some of the leading breathable film manufacturers are Berry Global Inc., RKW group, DuPont de Nemours Inc. Competition is expected to get fiercer as players aim at expanding their geographic footprint.

Some of the leading companies to give tough competition are-