The demand for antifoulants prevails in the regions with prominence of light and heavy industries, primarily owing to high capacity of the oil refineries. The ever-increasing customer demand for refinery products across various end-use sectors is a sign for the future demand for efficient crude oil. Attributing to this, manufacturers of crude oil are focusing on expansion and clean fuel investments.

For instance, in August 2017, Indian Oil Corp. Ltd., planned to invest US$ 0.03 Trillion over the next 5 to 7 years for expanding its refining capacity and build new businesses. At a globe level, steady growth is anticipated in oil industries, due to the demand for gasoline and fuels in the market. These products show signs of remarkable growth during the forecast period.

In the North America region, the U.S. is anticipated to gain 90 BPS by 2028 as compared to 2018 while expanding with a stable CAGR during the course of the forecast period. The U.S. is estimated to account the maximum share in the North America CDU heat exchanger antifoulant market in 2018 and is projected to rise extensively by 2028 end.

In 2013, the U.S. possessed the largest refinery capacity in the world with 139 operating refineries. Its refinery capacity was 17.38 million barrels per day at the end of 2012, accounting for approximately held a good share of the world’s total refinery capacity. Canada is anticipated to lose 90 BPS by 2028 as compared to 2018 while expanding with a strong CAGR over the forecast period.

Canada is estimated to account for what remains after the U.S.’s share in the North America CDU heat exchanger antifoulant market in 2018 and is projected to rise significantly as well in the coming years. 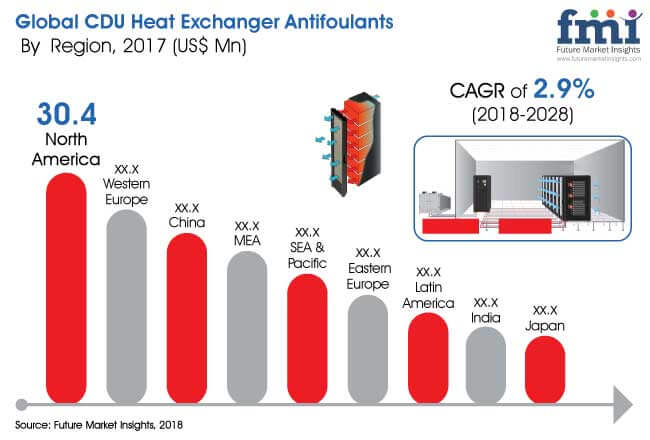 These countries have oil reserves, which in turn support the demand for antifoulants. Further, APAC is a major market owing to the establishment of new refineries to cater to the growing demand for new units in the countries such as China and India.

Shift of manufacturers towards emerging countries such as India and China is expected to be one such trend that can be seen gaining traction in the coming years. Increase in energy production from primary sources, such as coal, oil and gas, to fulfill rising consumer demand is expected drive production in refineries, thereby fueling the demand for antifoulants.

To meet this increasing demand, prominent players of the antifoulant market are expanding their manufacturing and production facilities to emerging regions, such as China and India, with an aim to reduce operational cost, owing to the availability of low cost labor and abundance of economical raw materials in these regions.

The global CDU heat exchanger antifoulants market has been segmented into: