While other players in the global chromatography resin market have contributed around US$ 200 Mn, the top five players in the market such as Bio-Rad Laboratories, Inc., GE Healthcare, Tosoh Corporation, Merck KGaA, and Thermo Fisher Scientific Inc. hold more than 70% of the revenue share with a contribution of more than US$ 500 Mn in the global chromatography resin market in 2016.

Stringent rules and regulations laid down by the U.S. Food and Drug Administration and the European Commission for new products such as chromatography columns and resins for diagnostics and analysis purposes may hinder the growth of the technology segment of the global chromatography resin market. Besides, the regulations laid down by the regional authorities for the use of chromatography technologies may also restrain the growth of the overall market during the period of assessment.

Cost is another limiting factor. Higher selling price of resins is anticipated to restrict market growth to a great extent. Column chromatography is usually regarded as a major cost driver. Besides, for the fixed costs, the column membranes that are used for protein purification swallow a large proportion of the costs. This factor is likely to hamper the growth of the chromatography resin market during the forecast period.

Repeated use of chromatography is another reason which is obstructing the growth of the by technology segment over the projected period. For the low-cost manufacturing of bio pharmaceuticals in the developing countries, several tactics are followed to reduce the costs such as repeated use of chromatography column resins during the purification process often stretching their use for more than 100–200 cycles which in turn affects the overall by technology segment.

Further, many industries use a smaller protein A column instead of using a large protein A column and multiple cycles are performed for the single batch of mABs. This also affects the segment. 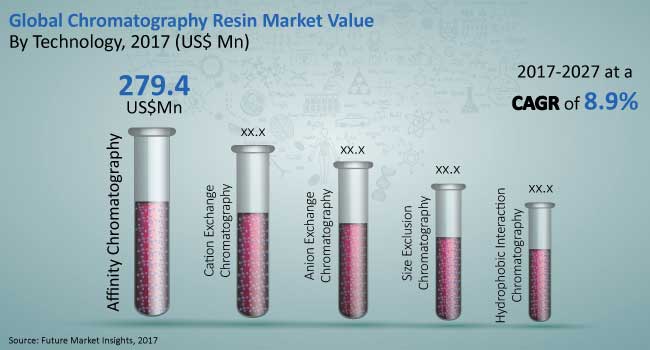