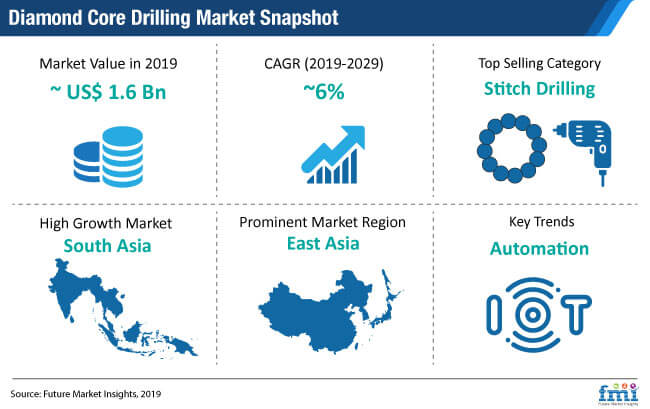 Moreover, the growing demand for materials such as diamond, uranium, zinc, gold, lead, coal, tin, copper, braze alloys, nickel and nickel alloys, is expected to boost the growth of underground mining, and relatively drive the growth of the diamond core drilling market during the forecast period.

Rising population is indirectly shaping the construction industry across the globe. The new ongoing construction building requires renovations in the construction industry, which is expected to increase the demand for diamond core drilling in the upcoming years. Governments are focusing on the rising spending on infrastructure and there are government-proposed policies and plans to connect rural areas to urban areas.

To accomplish this, government is outlaying significant money to make concrete roads. To check the road quality, some contractors are using diamond core drilling to take the sample and project the life of the road. The aforementioned factor is expected to increase the sales of the diamond core drilling in the near future. 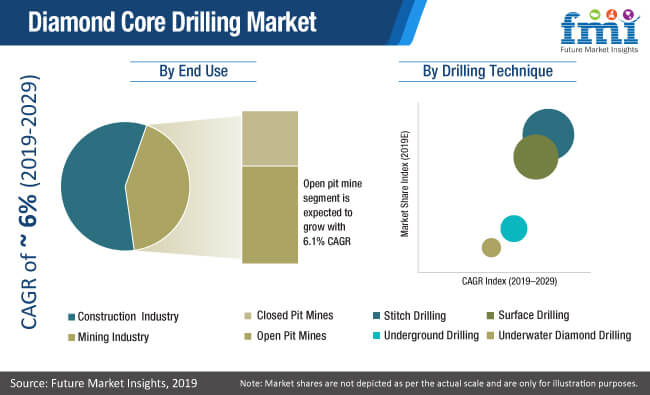 The advent of diamond core drilling machines is no lesser than a revolution, especially for the construction industry, which has been through an era of chisels and hammers that consumed a large number of resources. The ‘high cost’ deterrent of diamond core drilling machines, their bounded application territories in the construction and mining industries, and yet the landscape is projected to evince an above-average growth during 2019-2029.

Unsurprisingly, an upsurge in the mineral production rate has a pivotal role to play in the fortification of the sales. An increase - albeit a steady one - in the demand for minerals, including diamond, gold, zinc, lead, and uranium, will continue to unearth the true potential of the diamond core drilling market.

Adoption of Handheld Vs. Rig-operated Machines - Ergonomics have a Pivotal Role to Play

Over the last few decades, governments of numerous countries have been advocating that industrialists take ample workplace safety measures, in the best interest of their workers and equipment, which applies to even construction and mining industries. The legislation of stringent regulatory protocols for underground diamond core drilling machines has led to the underway shift from handheld machines to rig-operated machines.

However, beside the workplace safety norms, end-use industries are being conscious about the ergonomics of rig-operated machines, which is leading to a massive uptake in their adoption. In addition, the ideology of ‘high-quality over cost-efficiency’ is also being instrumental to this shift. However, volume sales of handheld machines are projected to outgrow that of rig-operated machines’, given the substantially low per-unit price.

A Game-changing Scenario to Focus on

A striking aspect of the diamond core drilling market to look for, will be the reshuffling of the regional rank of North America and East Asia, in 2019, given the high adoption of drilling machines in the construction industry, in China, Japan, and South Korea. However, South Asia is projected to upkeep its leading stance, considering the presence of economically crucial mineral reserves and an impressive stride of the construction industry in the region.

Automation and Customization - Two Keys to Unlock a Fructuous Future

As the number of supply partnerships increases among the end-use players and diamond core drilling machine manufacturers, trends of custom-development over standard development will continue to gain importance in the industry. The end-use industries put forward their specific product requirements, along with the dimensions, vary of those produced in uniform batches, to ensure utmost precision and better outcomes.

In the consolidated landscape, wherein the potential of leading players - Hilti Corporation, Robert Bosch GmbH, and Boart Longyear - plays instrumental to the movement of the entire industry, stringent quality and workforce safety protocols create an entry barrier for new players. The profitability of existing market players hinges on their flexibility to step up with the evolutionary landscape.

A shift to customized process, away from standard manufacturing process will remain imminent for manufacturers. Manufacturers can leverage inorganic growth strategy to gain exposure in the overseas territories. Since high prices of diamond core drilling machines may impact the performance of market players, devising a cost-competitive strategy in the developing countries by squeezing the profit margins can help achieve payback opportunities, along with a consolidated position in the long run.