Dried soup continues to gain more impetus in the F&B sector owing to its increasing popularity among consumers across the globe. It is safe, easy to make, portable and above all, suites the requirements of a modern consumer. In recent years, there has been a significant increase in the global consumption of various convenience food items including dried soup.

Moreover, introduction of soups that are gluten free and contain more nutritional value is expected to reflect favourable on the sales of dried soup over the next couple of years. As per the recent study conducted by Future Market Insights (FMI), the global dried soup market is set to surpass a valuation of US$ 2,000 Mn by the end of 2022.  The study has also identified a number of additional factors that are likely to influence the growth of the market during the forecast period (2017-2022).

By the end of 2017, over US$ 500 Mn worth dehydrated dried soup is expected to be consumed in Europe. Meanwhile, consumption of instant dried soup is likely to remain sluggish throughout the assessment period. 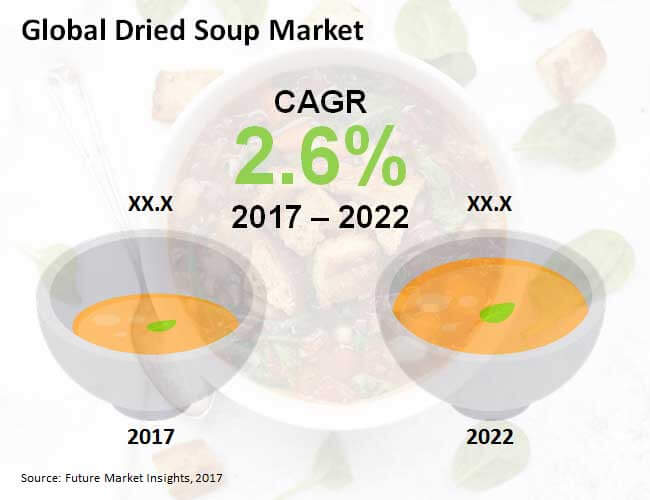 Dried soups packed in pouch are receiving an overwhelming response from consumers. Manufacturers are using attractive and innovating pouch based packaging designs that are extremely convenient and efficient. The pouches that are currently used in packaging of dried soup help in extending the shelf life of the product and substantially reduce the risk contamination.

In addition, these pouches are quite attractive and hence quickly gain the attention of customers. Increasing focus on use of lightweight material to manufacture pouch based packaging solution that are eco-friendly or biodegradable is also making a positive impact on their adoption in packaging of various food products including dried soup.

Further, such packaging facilitates easy shipping and reduces the overall cost of transportation logistics. In terms of revenue, global sales of dried soup packed in pouches are projected to make the highest contribution to the growth of the market during the forecast period.

HORECA, which is the code used for referring to the hotel and catering industry in Europe is the largest sales channel for dried soup. HORECA covers bars, hotels, restaurants and other various types of eateries. Towards the end of 2022, Dried soup market in usa is more than US$ 884 Mn worth dried soup is expected to be sold through HORECA. It currently commands for around 40% revenue share of the global dried soup market. Modern trade is expected to remain the second largest sales channel for dried soup over 2022.

Europeans Account for Highest Consumption of Dried Soup in the World

Dried soups europe market is expected to maintain its leading position in 2017 and beyond. This is primarily owing the high consumption by the world market dry soups across the regions. Moreover, a majority of restaurants, hotels and eateries in Europe include dried soup in their menu, which has apparently led to a greater penetration. Between 2017 and 2022, the market in the region is projected to surge at a steady pace.