Globally, consumption of biobased biodegradable plastics is projected to reach from 665.7 thousand tonnes in 2014 to 1,356.9 thousand tons in 2020 at a projected CAGR of 12.6% during the forecast period.

Some of the restraining factors identified in the market are low awareness of the consumers and relatively low durability of these plastics as compared to conventional plastics.

The key trends identified in the global biobased biodegradable plastics market include increasing utilization of these plastics in packaging applications, bottles and food service disposables manufacturing.

Polyester, starch blends and PLA collectively accounted for approximately 88% of the total biobased biodegradable plastics consumption in 2014 globally and are anticipated to remain the largest product segments by 2020. All other product types are collectively projected to grow at CAGR of 13.8% during the forecast period in terms of volume.

Global average pricing of biobased biodegradable plastics is expected to witness an increasing trend over the forecast period owing to certain factors such as varying capacity utilization rates across geographies, increasing energy costs resulting in increased production cost and supply-demand gap across geographies. 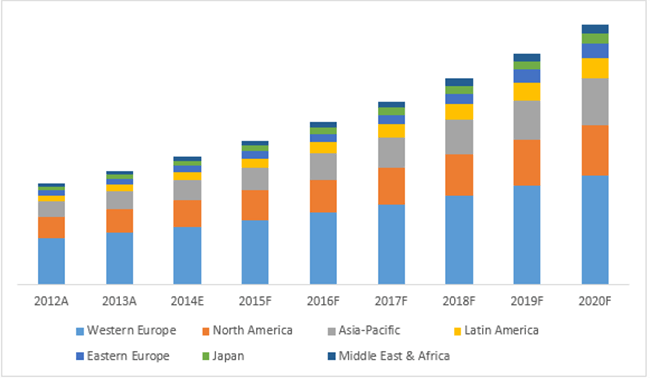 On the basis of product type

On the basis of region