An introduction to the impact modifier market

While this is expected to further exert significant pressure on an already strained public transport infrastructure globally, increasing demand is expected to contribute significantly to growth of the global impact modifiers market over the forecast period, attributed primarily to increasing willingness of urban consumers to spend on premium quality vehicles and accessories such as safety add-ons, and exterior and interior products, which are incorporated with impact modifiers.

In Asia Pacific region, specifically China and India, a significantly large customer base presents manufacturers of impact modifiers with a significant potential. In addition, the number of nuclear families in urban areas in various countries in APAC is increasing, which is a factor fueling demand for automobiles, which is an indirect factor directly impacting the growth of the impact modifiers market. In both the countries, presence of a large working age population, particularly the younger generation, is driving demand for cars (Average age at which cars are purchased in India was 39 in 2000, 36 in 2005, 33 in 2010 and 30 in 2015).

The demand for individual vehicles is increasing in both these countries. Moreover, rising per capita and disposable incomes along with China’s and India’s changing demographic distribution are positively affecting the growth of the automobile segment which indirectly demands the utilization of impact modifiers. 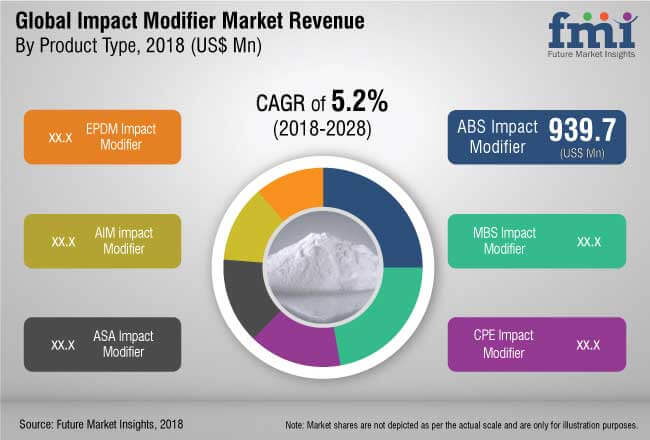 The IT sector has been witnessing substantial growth in the recent past, especially in developed and developing economies. This is resulting in increasing office space owing to infrastructure development, which is driving demand for office equipment and products incorporated with impact modifiers such as computers, storage batteries, communication equipment, and switchgear and switchboard apparatus. This development is voluminously driving the growth of the impact modifiers market.

The number of malls globally have doubled over past 5 years (2010-15) with electronic megastores such as Croma, Next, Reliance Digital etc. in India, Virgin Megastore, Saturn, Euronics in Europe, Best Buy, Suning in China, CDW Corporation, Apple Computer retail stores, Staples in the U.S. This has proved to be the perfect platform for companies to showcase their impact modifiers product range and create a wider consumer base in impact modifier market.

Engineering plastics costs higher than commodity plastics due to the addition of impact modifiers and various other processing and enhanced properties.

China is expected to become a key market for impact modifiers