The urgent demand for quality and cost effective injectors and injectable drug delivery is gaining the momentum across the drug delivery sector. With the covid-19 impact, awareness regarding hygiene and safety is increased, manufacturers are also focussing on providing customer access to sterile products. Furthermore, considering the patients demand for effective and convenient drug delivery, manufacturers are focussing on developing more consumer-friendly, and effective devices such as auto injectors, pen injectors, wearables, etc. Some recent developments in the sector are mentioned below.

In October 2020, Xeris Pharma’s won fast track tag by FDA for the investigation of XP-0863 diazepam non-aqueous injection. The development is for the treatment of acute repetitive seizures. The company by delivering the drug through auto injector aims to improve the current cluster seizure treatment. FDA has allowed Xeris to advance directly into phase 3 trial in both pediatric and adult patients with epilepsy. Diazepam is a drug given in emergency conditions to stop cluster seizures. It is recommended for short term effect and treatment.

E3D ELcam has recently developed auto injectors and other drug delivery devices for biologic products. E3D’s injectors are compatible with low, medium and high viscous formulations and are complete with automated and manual reconstitution for lyophilised products. The company makes customised products for its customers by understanding their unique requirements associated with its device platforms. The drug delivery devices of the company are made environmental friendly with an aim to reduce impact on nature.

In February 2021, Philips Medsize, a Molex has collaborated with Subcuject to bring a ground breaking wearable bolus injector to market. The new wearable Osmotic Bolus Injector is designed to be low cost, patient friendly for single use. Use of osmosis for generating the force to complete an injection cycle helps in minimal cost and time to the consumers. The collaboration aims to address the needs for inexpensive and single use injectors in the pharma sector.

Self-injectors type of injectable drug delivery includes wearable injectors that are small and handy. Self-injectors injectable drug delivery devices have a fine needle, which helps to reduce pain, and are generally used when a drug needs to be administered continuously, e.g., in the case of continuous administration and monitoring of insulin in patients suffering from diabetes. These devices either adhered to the skin or come with a belt.

The growing competition in the emerging regions and rising demand for injectable drug delivery are some of the major factors expected to drive the growth of the injectable drug delivery market during the forecast period. For instance, pharmaceutical companies that have expanded in the Asia Pacific countries, such as China, are trying compete with Mylan for EpiPen. Similarly, patients suffering with conditions such as dementia and rheumatoid arthritis find it difficult to use conventional injections.

Although North America is expected to be the dominant region for injectable drug delivery, Asia Pacific and Middle East & Africa are expected to expand at high CAGRs over the forecast period.

The global injectable drug delivery market is expected to be driven by increasing prevalence of chronic diseases such as diabetes and cancer. According to the WHO, cancer is the leading cause of deaths across the globe. In 2015, cancer was responsible for nearly 8.8 million deaths worldwide. According to the National Cancer Institute, an estimated 1,735,350 new cases of cancer are expected to be diagnosed in the U.S. in 2018.

Furthermore, most of the injectable drug delivery devices find wide application in the treatment of diabetes. Since diabetic patients are prescribed with insulin, they require regular injection of insulin. However, the risk of needle stick injuries is a growing concern. Thus, wearable insulin pumps and other injectable drug delivery devices are the preferred option for diabetic patients, since these devices have fine needles, which reduce the likelihood of injuries. 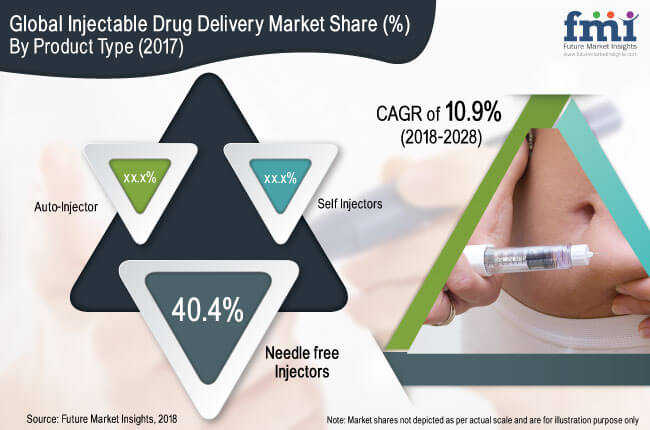 Furthermore, China, being one of the most populated regions in the world, has high aged population and the number is growing steadily. The increasing ageing population in the region is consequently expected to drive the growth of injectable drug delivery in the Asia Pacific region.

The key players can be classified based on the type of product they offer. Examples of some the key players manufacturing self-injector type of injectable drug delivery are Amgen, Medtronic Plc, Dexcom, West Pharmaceutical Services, and Consort Medical (Bespak), among others.

The Global Injectable Drug Delivery Market has been Segmented Based on:

The report classifies the regions and presents the forecast in terms of value for the next 10 years. The regions covered in the report include:

The next section of the report analyses the product type and presents the forecast in terms of value for the next 10 years. The injectable drug delivery types covered in the report include:

The next classification is based on usage of injectable drug delivery products and provides forecast in terms of value for the next 10 years. The usages covered in this report include: