More than half of the overall lithium produced is consumed by battery manufactures around the world. The consistently rising demand for batteries, spurred by burgeoning sales of electric vehicles is creating growth opportunities for the lithium mining market.

Moreover, ongoing developments in the consumer electronics industry is also expected to elevate demand for batteries, creating robust opportunities for players over the assessment period.

Owing to aforementioned factors, FMI has projected the lithium mining market to expand at a steady 7.2% CAGR through 2031. 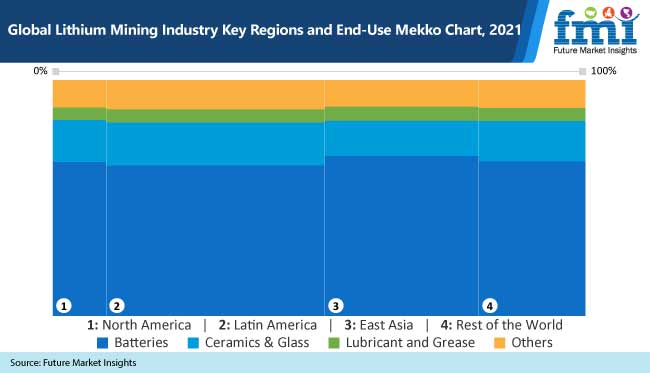 How Will Increasing Sales of Consumer Electronics Augment Growth of the Lithium Mining Market?

As per FMI, demand for lithium is expected to grow at a rapid pace owing to growing production of electric vehicles and other electrical and electronic products. As a result, growth of the lithium mining market is on card.

Owing to rising environmental concerns, consumers are shifting their focus to fuel-efficient electronic vehicles. This trend is being widely observed in countries including the U.S., Germany, and China, which in turn is expected to propel demand for lithium mining services over the forecast period.

Moreover, the glass and ceramics industry is the second largest consumer of lithium for batteries. Increasing demand for glass and ceramics for packaging of pharmaceuticals, food & beverages, and perfumes is expected to bode well for the expansion of the lithium mining market.

However, growing trend of sustainability and stringent regulations regarding environment protection might hamper growth of the global lithium mining market.  In addition to this, fluctuations in pricing due to high competition among market players is expected to have a negative impact on the lithium mining market.

What are the Factors Driving Sales in Lithium Mining Market?

Growing electric vehicle sales and demand for electrical and electronics products is elevating the demand for the batteries. Rising demand for batteries is expected to create robust opportunities for global lithium mining market.

Emerging economies such as India and China are extensively adopting electric vehicles at a very rapid pace. According to Indian Society of Manufacturers of Electric Vehicles (SMEV) total electric vehicles sales in India were pegged at 22,000 for fiscal year 2015-16 however the number have expanded to almost 155,400 in the year 2019-20.

Rapid adoption of electric vehicles in the emerging economies is expected to create robust opportunities for global lithium mining market during the upcoming assessment period of 2021-2031.

What Is the Impact of the COVID-19 Crisis on the Lithium Mining Market?

The ongoing COVID-19 crisis is anticipated to have a significant impact on the global economic growth for the period of 2020-2021. The global economic growth curve witnessed a downfall up to -5% owing to the pandemic. Factors such as nationwide lockdowns, travel restrictions, and halted manufacturing and production across various sectors has resulted in stunted consumption of lithium.

Mining operations were also shut down in 2020 in globally. This has resulted in dampened growth prospects in the global lithium mining market. However, with resumptions in production and sales in the automotive and consumer electronics industry, the lithium mining market is expected to recover at a steady pace over the forecast period.

Why is Demand for Lithium High in the U.S.?

In 2021, the lithium mining market in the U.S. is expected to witness 3.2% year-over-year growth. The U.S. is home to leading electric vehicles manufacturers such as Tesla Inc., General motors, Ford, and others, which in turn is spurring demand for lithium-ion batteries. The country imports lithium from various sources to cater to the growing demand from the automotive and consumer electronics industries.

Argentina and Chile are the major exporters of lithium to US. More than 90% of lithium imported in country is imported through these countries. With production of electric vehicles forecast to surge, the U.S. will emerge as a highly lucrative market for lithium mining.

How will the Lithium Mining Market Expand across Australia?

Australia is one of the global leaders in lithium production worldwide. The country produced almost 42,000 Tons of lithium in 2019, which is expected to continue rising due to increasing demand for electric vehicles and other electrical and electronics devices.

Moreover, the country has the second largest lithium reserve of about 2,800,000 Tons after Chile. Key manufacturers are expanding their production capacities in Australia to leverage the surplus supply of lithium to improve sales.

China is expected to be one of the leading markets for lithium mining. The country has substantial amount of lithium reserves. China is positively engaged in extraction of lithium in order to cater the global demand. China also exports lithium to various countries including US, India, Japan, and others.

Moreover, the country itself is a leading consumer of lithium. Owing to the large consumer base of electronic vehicles along with various production facilities of electrical and electronics, the country exhibits robust demand for lithium. The demand graph in the country is expected to rise exponentially during the upcoming assessment period of 2021-2031.

Which is the Most Widely Utilized Source of Lithium?

Lithium can be extracted from a variety of sources such as brine, hard rock, ore mining and others. Currently, Australia is leading in terms of lithium production and the country produces majority of lithium through ore mining. However, countries such as Chile and Argentina produce lithium through brine solutions.

Lithium production through evaporation of brine solutions present in lake water and other sources is considered as the most widely used production process across the globe. The brine solutions segment is expected to account for over 65% of the lithium mining market over the forecast period.

Which Lithium Type will Remain Highly Sought After?

By type, the lithium hydroxide segment is projected to account for a dominant market share over the forecast period.  Lithium hydroxide finds applications in battery manufacturing, air conditioning, glass and ceramics and various others.

More than half of the overall lithium produced is used in manufacturing batteries for electric vehicles. Demand for lithium ion batteries is growing in response to increasing sales of electric vehicles and consumer electronics.  Sales of lithium in the battery segment are projected to grow at 8.5% year-over-year in 2021.

In addition to this, increasing adoption of portable and wearable consumer electronics is expected to bode well for the global lithium mining market. Portable electronic devices use rechargeable lithium ion batteries, resulting in high demand and consumption of lithium over the forecast period.

Leading players operating in the global lithium mining market are focusing on strategic collaborations, mergers and acquisitions to expand their production facilities to cater to the growing demand. Apart from this, product innovations and strengthening distribution channels will remain prominent growth strategies adopted by key players. For instance:

*The list is not exhaustive, and only for representational purposes. Full competitive intelligence with SWOT analysis is available in the report.