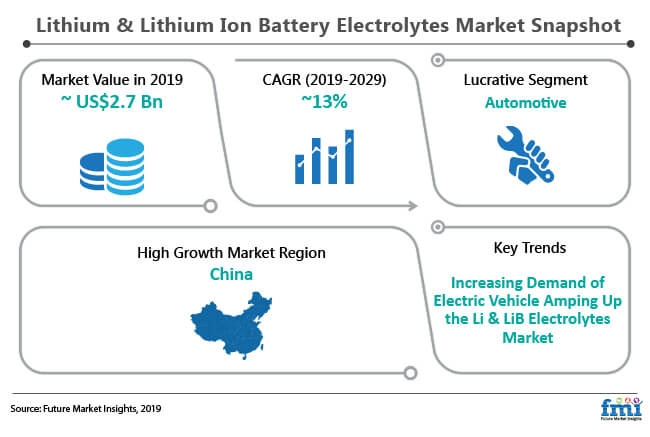 Electric vehicles are believed to be a major step towards fighting environmental problems created by the gasoline-dependent automotive sector. Though the concept of alternatives for gasoline automotive such as electric vehicle, in the Europe region, is at an infancy stage, activities have surfaced, especially in the Russian as well as Polish economies, which are expected to propel the growth of the market.

However, countries such as Japan, China, and South Korea have optimally oppressed the lithium and lithium ion battery electrolyte market over the recent years. The increase in demand for electric vehicles has been one of the most enticing factors to drive the electrolytes market growth over recent years, and the trend is expected to continue in the years ahead.

Multiple countries are following suit in the transformation from gasoline operatives to electric vehicles, which is expected to bolster the lithium and lithium ion battery electrolytes market growth.

Flourishing Demand for E-bikes and Electric Vehicles in Asia Pacific

The demand is spurred by both OE (Original Equipment) and aftermarket, which drive sales in new as well as replacement market segments. With improvements taking place in the global economy, vehicle sales have been on a constant rise, which is a highly positive sign for the electrolytes market.

Government Incentives for the Promotion of Electric Vehicles 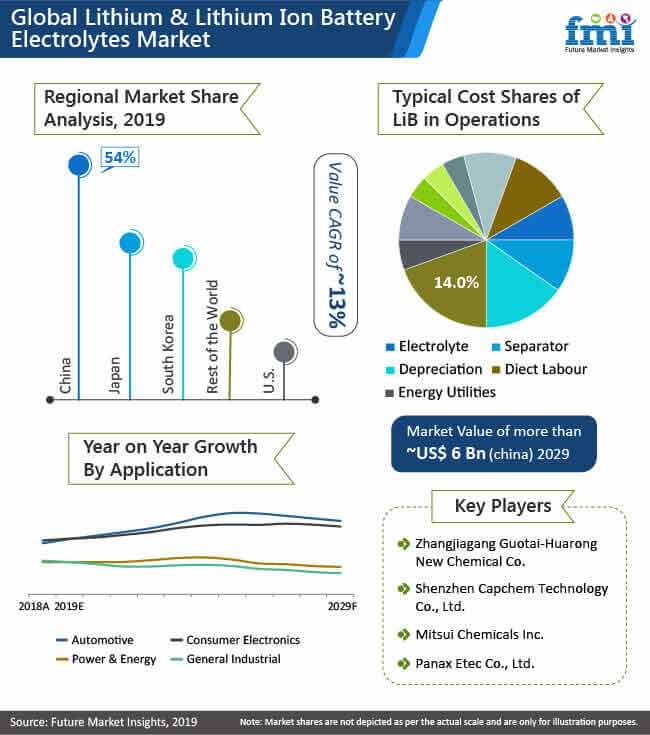 Suitable proportions of the solvents improve the electrochemical stability of electrolytes with high Li+ ion conductivities of about 10 mS/cm, required for high-performance Li-ion batteries.

However, liquid electrolytes for conventional Li-ion batteries are flammable, toxic and corrosive. Studies suggest that small electrolyte discharge at room leads to the formation of potentially toxic environment. Liquid electrolytes are volatile at high temperatures due to thermal dissociation of LiPF6, while rapid charging and discharging of li-ion batteries or damages due to vehicular collisions.

Under extreme conditions, the batteries ignite the chemicals which causes thermal runaway. As such, the pressure inside the batteries increases, ending in explosions in the liquid electrolyte. In addition, liquid-based electrolytes pose the challenges of electrochemical instabilities, and low ion selectivity.

Solid electrolytes eliminate the membrane needed in liquid electrolytes, enabling closer interaction between the electrodes without touching for better compactness, and high energy density. In addition, solid electrolytes improves the strength of Li-ion batteries, dismissing the need for protective coating or casing.

Sulfide particles, owing to good mechanical ductility, change their shape to adjust with the cathode particles to improve the contact between electrodes and sulfide electrolytes. On the contrary, solid electrolytes lag behind their liquid counterparts in terms of conductivity due to lesser free ions in the liquid.

Citing environmental preservation, governments in countries – China, India, and Japan – are directing automobile manufacturers to replace the traditional fleets with electric and hybrid vehicles. The Indian administration is launching numerous schemes in a bid to increase the count of EVs on the Indian roads by next year – boosting the demand for lithium and lithium ion battery electrolyte.

Policy makers in Japan are exempting EVs from acquisition tax and tonnage tax. To improve the adoption of EVs, the government is offering incentives to the purchasers, including reduced tax rates, and subsidized purchases. China, under the 5-year plan project, has planned to completely electrify automobiles within the next few years, an attention-grabbing factor for lithium and lithium ion battery electrolyte manufacturers.

Liquid electrolytes pose the threat of inflammability due to leakages, and abuse conditions. Recent aircraft explosion cases are further confining their operation to ground vehicles. Market players are producing sulfide based lithium and lithium ion battery electrolytes in light of high thermal stability.

The fact that solid electrolytes eliminate the need for protective casing reduces operational costs regarding li-ion batteries. As such, manufacturers are increasing the production of solid- and gel-based lithium and lithium ion battery electrolytes to facilitate diverse sectors.

Continuous usage of electronic gadgets, such as smartphones, increases the temperature of the devices, keeping consumers at risk due to inflammation. Manufacturers of consumer electronics, driven by the challenge, are substituting liquid electrolytes with the solid versions.

The dire need to protect the environment from the wrathful eye of pollution is propelling the demand for electric automobiles across the globe. The automotive space is undergoing complete electrification of their offerings to achieve sustainability in tandem with consumers’ trend of ‘Go Green’. As such, lightweight Li-ion batteries are set to disrupt the transportation sector, increasing the demand for lithium and lithium ion battery electrolytes.

Governments are urging automobile makers to focus on the production of EVs, and are planning to achieve complete electrification in the upcoming years. The bottleneck of inflammability with the liquid electrolytes will influence manufacturers to develop solid state lithium and lithium ion battery electrolytes for electronic gadgets.