Video-assisted thoracoscopic surgery (VATS) lobectomy is gaining acceptance over open lobectomy. According to the Society of Thoracic Surgery (STS) General Thoracic Surgery Database (GTSD), VATS lobectomy procedures has increased over time from 8% in 2003 to 44.7% in 2010 among lung cancer patients.

Companies such as Medtronic, Ethicon, Intuitive Surgical Inc., and others are constantly launching new products in the lung cancer surgery market. Moreover, companies are focusing to develop and achieve regulatory approvals for new procedures and interventions. For instance,

Advanced surgical instruments and endoscopic devices have increased the device versatility and ease of use in complex cases such as lung resection procedures. Technological transformation has led to a positive impact on the global lung cancer surgery market growth. 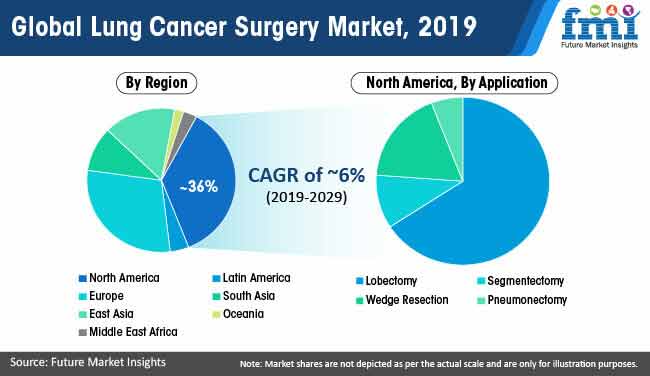 There have been more than 2 million new lung cancer cases by 2018 end, which is a clear indicator of how rapidly the demand for lung cancer surgery will grow in the near future. Currently a billion-dollar market, the global lung cancer surgery landscape is set to observe a robust growth outlook during the next decade.

As chronic obstructive pulmonary disease (COPD) patients are at a high risk of suffering from lung cancer, the rising prevalence of COPD linearly reflects the growing need for lung cancer surgery. With technological advances disrupting the field of lung cancer surgery, FMI expects the market revenues to grow 2X over the period of next decade. Further, market players are innovating lung cancer surgical procedures that ensure minimal invasion and faster recovery time.

Advent of robotics in healthcare has been driving adoption of robotic-assisted thoracic surgery systems (RATSS), which is estimated to witness a notable spike in revenues in the near future. Adoption will be prominent in North America and East Asia.

While the growth of developed regional markets will bank on massive healthcare expenditure and favorable reimbursement scenario, developing markets across Asia would prominently receive a push from expanding patient pool and faster technology penetration.

Demand for lung cancer surgery in lobectomy will remain maximum, especially in developed countries. It has been observed that the video-assisted thoracoscopic surgery (VATS) lobectomy is gradually replacing conventional lobectomy owing to the reduced morbidity, faster recovery, and shorter hospital stays associated with former. Segmentectomy and wedge resection, on the other hand, are suitable for early stage non-small cell lung cancers.