Growing demand for food, especially in emerging economies in Asia and Latin America are generating demand for advanced irrigation technologies. Furthermore, the growing demand for water conservation, more so in arid geographical regions is expected to create a conducive environment for growth in the industry.

ESOMAR-certified market analysis and consulting company Future Market Insights (FMI) delivers insights into key factors providing impetus to the micro irrigation systems market in its latest report. Furthermore, an evaluation of the effect of the COVID-19 pandemic on the micro irrigation systems market, and an analysis of sales in 20+ high-growth markets and end-use applications has been provided in the report.

How Does Historical Data for Micro Irrigation Systems Market Compare to Future Outlook?

According to the report by Future Market Insights, the micro irrigation systems market has been rising exponentially with growing concerns regarding water scarcity and food security around the globe. Also, according to a census conducted by the International Commission on Irrigation and Drainage the acreage of micro irrigation has grown by 25 times in the past 3 decades. Major gains have been witnessed with drip irrigation systems, especially in developing countries owing to relatively low costs of purchase and installations.

Since the onset of the coronavirus pandemic, disruptions to supply chains in terms of raw materials and components have been a matter of concern owing to restrictions on manufacturing and non-essential transport activities. Also, labor issues in the agriculture sector have hurt short term growth prospects.

Through the upcoming decade ending in 2031, the micro irrigation systems market is expected to reflect strong recovery and growth with a CAGR of over 13%. Advances in analytics and water flow mechanics are likely to ensure positive growth prospects in the near future.

How are Advancements in Analytics Contributing to Market Developments?

The United Nations has estimated that farms will need to increase production by around 70% by 2050 to maintain adequate supplies for the global population. This is expected to be an issue as fresh water resources continue to fall. Drip irrigation systems allow for high levels of precision in water usage for agriculture.

In addition, micro irrigation is gaining from the use of water flow meters, which can help to minimize costs by preventing overwatering. As water resources continue to fall, accuracy in terms of data on irrigation water use with innovations in soil sensors will prove to be important.

Also, the introduction of new software products will aid in analyzing vast amounts of data, providing farmers with critical information, including data on local weather and equipment functionality allowing for better comprehension of water requirements to optimize production, while minimizing wastage.

What are the Key Challenges Facing Market Players?

Micro irrigation systems are expected to continue gaining traction in the agriculture sector for the foreseeable future. However, there are a number of challenges that are anticipated to limit growth prospects in the long term.

For instance, costs of sprinklers, and drip irrigation systems remain high, limiting adoption in low budget farming operations, especially in emerging economies.  Also, farmers are not very aware about micro irrigation systems and their advantages, which is also limiting growth. Consequently, government-based promotional programs and financial incentives will play key roles in the positive development of the market in the long-term.

How is the United States Contributing to Market Growth?

According to the United States Geographical survey, water scarcity to meet agricultural demand in the country has been steadily growing since the 1950s. As a result, the use of ground water for irrigation has gone up, and accounts for close to 50% of the overall agriculture water use in the country.

Irrigation withdrawals of fresh water account for more than 40% of the overall fresh water use in the U.S. Further, approximately 55 of the irrigation was conducted through sprinkler systems. Approximately a 10th of all irrigation occurs through micro irrigation systems. Furthermore, the United States has a significant concentration of market players, which is expected to drive demand for the foreseeable future.

What is the Role of China in Micro Irrigation?

The acreage under micro irrigation in China has risen at an annual rate of approximately 27% in the past decade covering more than 5.2 million hectares, accounting for 8% of the irrigated area in the country. As per a ICID report, China ranks first in terms of micro irrigation, and has found acceptance in all provinces of the country.

Micro irrigation has become increasingly popular in the country for green house cultivation of vegetables, with improvements in terms of both pest and disease control. Given the large food requirements of the country, the prospects of market growth will remain positive through the assessment period.

Why is India Becoming a Major Power in Micro Irrigation Systems?

The Indian micro irrigation systems market is competitive with the presence of more than 200 companies of both large- and small-scale manufacturers and distributors in the country. While the adoption of micro irrigation systems by Indian farmers shows promise, market penetration remains low, as approximately half of all arable land continues to rely on rainfall. As a result, the potential for market growth in the country will remain very high through the coming decade.

What are the Prospects of Micro Irrigation Systems in Spain?

In the European Union, Spain is a leading user of micro irrigation. The government has introduced a number of reforms to manage the demand for water in the country. These include environmental taxes, public water rights, and subsidies for irrigation modernization. While irrigated land accounts for only 13% of the overall agricultural land in Spain, it also accounts for around 50% of the GDP.

Also, water saving from irrigation accounts for approximately 15% of the yearly average of national agricultural water use. Murcia and Cartagena are some of the more prominent regions using micro irrigation systems accounting for 84 and 96 percent of irrigated land in these regions. Incorporation of remote control systems and geographic information systems are playing key roles in the prospects of micro irrigation in the country. 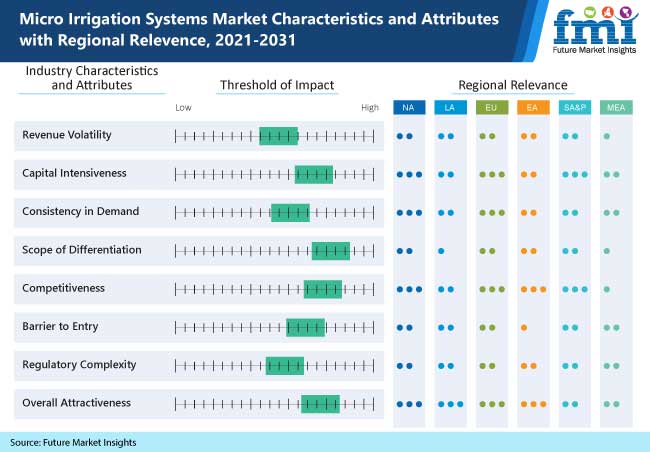 What Type of Micro Irrigation System is Gaining User Preference?

Drip irrigation systems are projected to account for more than 60% of the overall market through the end of 2031. This can be attributed to efficacy in water management in addition to relatively lower costs of purchase and installation, and suitability for both small- and large-scale farming operations.

What End Use is Key to Revenue Generation?

Micro irrigation systems are finding use among small farmers, large private & corporate farms, government facilities, and other small-scale operations such as nurseries, green houses, and gardens. Small scale farmers are expected to contribute significantly, which can be attributed to a larger area of arable land.

On the other hand, small scale applications in green houses will display a relatively higher rate of growth with growing demand for water and cost efficient agriculture processes, in addition to concerns over climatic conditions and costs of water and electricity, which are likely to become increasingly prominent in the years to come.

Major players in the moderately fragmented micro irrigation systems market are focused on strategies involving portfolio expansions with investments into research and development efforts in addition to tapping into unexplored opportunities in emerging markets. Collaborations with regional players is also likely to find the interest of market leaders.

In May 2021, the Abdul Kalam Technological University announced the development of a software in collaboration with the Kerala Irrigation Infrastructure Development Corporation Ltd. for applications in automated community micro irrigation systems to improve crop yield.

In February 2021, Rother Farming started trials for its new N-Drip micro irrigation systems. The company claims that the systems will be able to save water resources by approximately 25%, without being as capital intensive as lateral irrigation options.

In August 2020, Israel based Netafim announced its entry in a deal worth US$ 85 million to provide advanced irrigation systems for around 35,000 farmers located in India, covering 66 villages over 50,000 hectares over a period of 2 years.

Future Market Insights has also analyzed the following players in the micro irrigation systems market in its detailed report:

*This list is indicative - full details about the micro irrigation systems market players are available upon request.