Negative-Pressure Wound Therapy (NPWT) is a therapeutic technique (or) sealed wound-care system that involves usage of a vacuum dressing to promote healing of large chronic persistent wounds and acute complicated wounds. NPWT is also used for rapid healing of second- and third-degree burns.  The system consists of an electronically controlled pump and a foam dressing that drains the wound. An adjustable negative pressure is applied via an airtight adhesive film that covers the wound. NPWT drains wound exudate and helps to promote blood circulation and healing.  The global NPWT market has been segmented on the basis of product type, end user and region.

Growth of the global NPWT market is mainly driven by rising adoption and growing demand for smart and small NPWT devices, coupled with socio-economic factors such as increasing acute and chronic wound conditions, which are attributed to growing ageing population as well as increasing burn incidences globally.

Other prominent factors driving growth of the market are technological advancements related to the development of lighter and canister-free NPWT devices as well as decreasing length of stay in hospitals due to increasing adoption of NPWT devices in homecare settings.

However, increasing complications associated with NPWT devices, lack of skilled clinicians and increasing competition from parallel therapies, which have been exhibiting higher efficacy in treating chronic wounds, are factors expected to restrain growth of the market over the forecast period.

Majority of the medical devices manufacturers globally are expected to invest more on technological advancements and better product designs to minimise the probability of complications associated with devices and to eliminate the corresponding adverse impact on patient safety.

Based on end user, the market has been segmented into hospitals, clinics and home care settings. The hospitals segment currently accounts for highest revenue share of the NPWT devices market. NPWT is also gaining importance in home care settings owing to its cost effectiveness when compared to the cost of staying in a hospital. 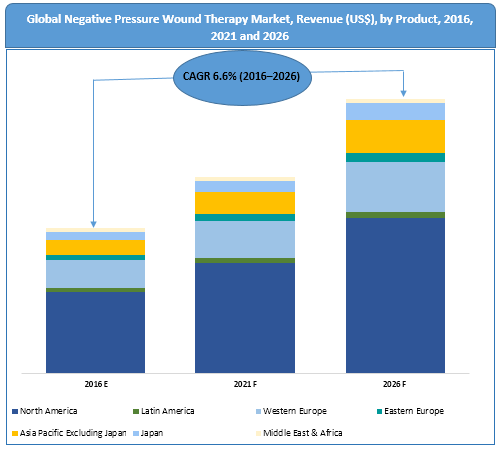 In this report, Future Market Insights (FMI) offers a 10-year forecast of the global Negative Pressure Wound Therapy (NPWT) Market between 2016 and 2026. In terms of value, the market is expected to register a CAGR of 6.6% over the forecast period. This study demonstrates market dynamics and trends in all seven regions that are expected to influence the current environment and future status of the NPWT market over the forecast period.

This FMI report examines the NPWT market for the period 2016–2026. The primary objective of the report is to offer insights into developments in the NPWT market that are significantly helping transform growth trajectory of global businesses and enterprises associated with the same.

The NPWT market report begins by defining various types and listing usages of NPWT. It is followed by an overview of the market dynamics of the global NPWT market, which includes FMI’s analysis of the key trends, drivers, restraints, opportunities, regulations and government initiatives, which are influencing growth of the global NPWT market. Impact analysis of the key growth drivers and restraints based on the weighted average model has also been included in this report after analysis of individual regions, to better equip readers with meaningful insights on the ongoing developments in the market.

The primary factors fuelling demand for NPWT are growing incidence of acute and chronic wounds, burn cases and major surgeries. Other major factor driving demand for NPWT is rising prevalence of chronic diseases directly related to the onset of chronic wounds such as diabetes mellitus and cardiovascular diseases. Besides, growing confidence of clinicians and physicians regarding NPWT, rising patient awareness regarding cost-effective NPWT devices such as portable and stand-alone devices and availability of low-cost NPWT options in developing countries are among the other factors expected to further fuel overall growth of the market over the forecast period. However, a primary factor hampering growth of the NPWT market is lack of skilled clinicians and complications associated with NPWT devices.

Based on product type, the market has been segmented into stand-alone NPWT devices, portable NPWT devices, single use disposable NPWT devices and NPWT accessories (Canisters). A detailed analysis of each segment has been provided in terms of market size, Y-o-Y growth rate, absolute $ opportunity and BPS analysis.

The report has been segmented based on end-users. Meanwhile, foray of new hospitals is expected to lead to increasing demand for NPWT devices. This trend is expected to be particularly prominent in countries where access of people to healthcare services is on the rise. These include countries in APAC and Latin American countries.

The next section of the report highlights NPWT adoption by region, and provides market outlook for 2016–2026. The study discusses key regional trends contributing to growth of the NPWT market worldwide, as well as analyses the extent to which drivers are influencing this market in each region. Key regions assessed in this report include North America, Latin America, Western Europe, Eastern Europe, Asia Pacific Excluding Japan (APEJ), Japan and the Middle East & Africa (MEA).

The above sections— by product type, end user and region — evaluate the present scenario and growth prospects in the global NPWT market for 2016–2026. We have considered 2014 as the base year, 2015 as the estimated year and provided data for the forecast period, i.e., 2016–2026.

To ascertain NPWT market size, we have also considered revenue generated by device manufacturers. The forecast presented here assesses the total revenue generated in the global NPWT market. In order to offer an accurate forecast, we started by sizing up the current market, which forms the basis of how the global NPWT market is expected to develop in the future. Given the characteristics of the market, we triangulated the outcome of three different types of analysis based on supply side, downstream industry demand and the economic envelope.

In addition, it is imperative to note that in an ever-fluctuating global economy, we not only conduct forecasts in terms of CAGR, but also analyse based on key parameters, such as year-on-year (Y-o-Y) growth rates, to understand the predictability of the NPWT market and to identify the right opportunities across the market.

The NPWT segments, by products, end user and region, are analysed in terms of Basis Point Share (BPS) to understand the individual segment’s relative contributions to market growth. This detailed level of information is important for identifying various key trends in the NPWT market.

Key categories of providers covered in the report are NPWT manufacturers. This section is primarily designed to provide clients with an objective and detailed comparative assessment of key providers specific to a market segment of the NPWT value chain and the potential players with respect to the same. Report audiences can gain segment-specific vendor insights to identify and evaluate key competitors based on the in-depth assessment of their capabilities and success in the NPWT marketplace.