The growing healthcare expenditure and rising disposable income of people are expected to lead to an expansion in the applications of disposable negative pressure wound therapy (NPWT) devices across the globe.

Developing countries are expected to provide substantial prospects for market players to venture into and different applications, mainly homecare settings and hospitals. Reduced hospital stay, encouraging the scope for home healthcare, is also expected to significantly support adoption of disposable NPWT devices in near future. On the global front, home care settings is expected to dominate followed closely by hospitals. 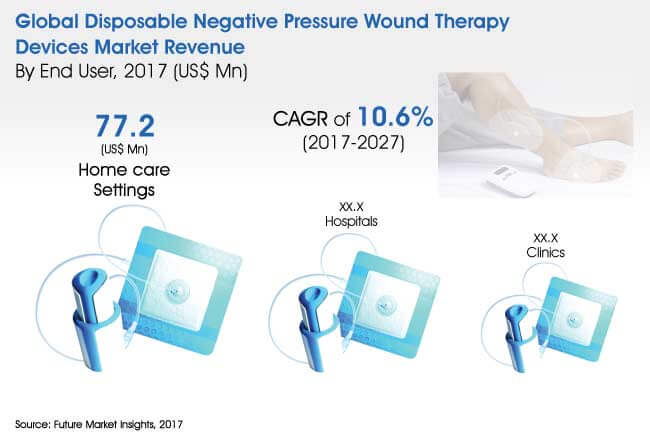 Rising per capita income of people in North America is influencing individuals to spend more on health care. Apart from this, people are gaining more awareness pertaining to healthcare and healthcare services. Increasing disposable income in developing as well as developed economies is inciting individuals to opt for safer and advanced product types for diabetic foot ulcers. Initiatives, such as the Affordable Care Act in the U.S., aim to provide universal health coverage to all residents, thereby enabling better access to quality care.

The time that individuals spend in hospitals is also declining, mainly developed regions as awareness among people is growing and their disposable income is also increasing. Thus, as a result of this, the use of disposable Negative Pressure Wound Therapy (NPWT) devices is higher in North America in home care settings instead of hospitals or Outpatient clinics. However, issues related to product acceptance and reimbursement coverage might impact the growth trajectory of these devices, mainly in hospitals and home care settings.

On the other hand, in Western Europe, the improved reimbursement rates for disposable NPWT is expected to boost the implementation of these devices in hospitals, clinics, as well as home care settings. In European health-care systems, dedicated product reimbursement granted by publicly-funded healthcare systems or health funds is a key factor for the widespread adoption of the devices. In the Eastern European region, the proliferating demand for advanced wound management in home care settings is expected to augment the employment of the devices in this sector in the long run.

As people are becoming aware about the available healthcare services and devices with each passing day, the implementation of certain services and devices is also increasing. Especially developing regions such as Latin America and Asia Pacific excluding Japan are catching up with the developed nations in terms of health care services owing to the growing disposable income of people in the regions. The manufacturers of disposable NPWT devices are also focusing on investing in these regions.

Governments are taking initiatives to make users aware about advanced wound care treatments, which will help in attaining fast recovery of chronic wounds. In addition to this, public reimbursement for wound management and other chronic conditions have increased favorably, which is likely to have a positive impact on the market and the use of the device in hospitals, clinics, and home care settings.