The global disposable plates market is expected to witness gradual growth throughout the period of forecast. This growth can be attributed to growth of online food service and home delivery platforms, cost effectiveness and convenience. The global disposable plates market is projected to grow at a CAGR of 5.9% during the assessment period, to reflect a 1.76x increase in value from 2017-2027.

Around US$ 3.6 Bn is the global disposable plates market standing in 2017 and it is estimated to reach an evaluation of about US$ 6.4 Bn by 2027. The global market for disposable plates has gained a lot of traction post 2012-2016 period, during which it reflected moderate growth rate; its growth rate has significantly improved since this timeline.

Manufacturers have introduced alternatives to conventional materials with a view to assist food service players fulfil their sustainability objectives. Non-conventional material such as biodegradable plastics, and edible stocks have been used to manufacture disposable plates.

Additionally, paper plates are gaining high steam and prominence across regions in the globe owing to their environment friendly properties and with ban on plastics in certain regions, there is a high growth opportunity for paper plates, thus triggering the growth of the global disposable plates market.

Plastic plates are expected to be the most widely used across several regions in the globe. Even though plastics have been facing several restrictions from governments in certain regions, the market share of disposable plastic plates has witnessed steady rise owing to durability characteristics. The plastic plates segment is projected to grow at a value CAGR of 5.7% and is estimated to reach a valuation a little under US$ 4 Bn by the end of the year of assessment.

The volume of plastic plates sold is the highest as compared to other segments; in 2017, it reached more than 957 tonnes. The plastic segment is likely to dominate the global market for disposable plates during the period of assessment. 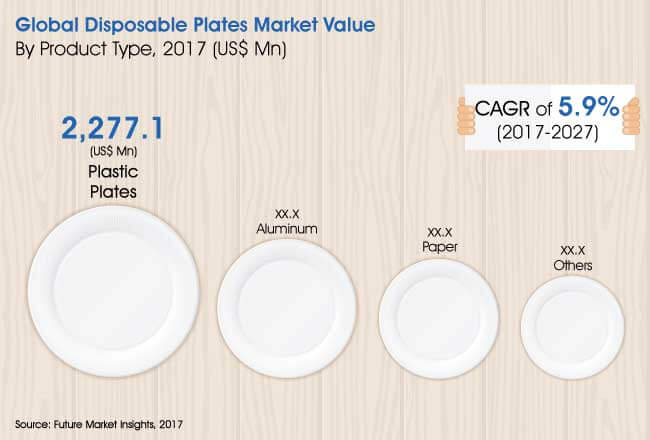 Growth of plastic plates directly associated to foams; foam being the largest contributor

Plastic plates segment is further categorized into foam, PP, PET, PLA, PHA and other plastics sub segments. The foam sub segment is the largest with a high market share and is expected to highly contribute to the growth of the parent segment. The foam segment in 2017 is valued at around 900 Mn and dominates the market. This trend is poised to continue in the coming years and this sub segment is expected to lead the global market by the end of the forecast period.

By 2027 end, the foam sub segment is estimated to touch a valuation as high as US$ 1.6 Bn, growing at a significant value CAGR of 5.9% throughout the period of forecast. On the other hand, the other plastics segment is projected to grow at the highest pace in the coming years and register a huge 8.1% value CAGR during the said period.

The paper segment in the product type category is anticipated to grow at a significant rate to register a CAGR of 6.2% during the period of assessment. This segment is estimated to reach a value of around US$ 870 Mn by the end of the year of assessment and is the second largest product type segment.

View All Reports from Packaging