The foodservice industry is expected to witness substantial growth during the forecast period, owing to improvements in the economic condition of developing countries, adoption of fast-paced lifestyles, and rapid urbanization. The On-the-go meal trend is gaining traction across a lot of countries. This is expected to create a steady demand for disposable cutlery in the foreseeable future.

Despite restrictions by governments on single use plastics, players in the global disposable cutlery market are expected to benefit from innovations in bioplastic materials. Further, the global coronavirus pandemic has resulted increased consumption of disposable commodities including plastic, wood, and paper containers, spoons and more, particularly in the food service sector, which has been engaged in contact free initiatives for their offerings.

Consumers have taken to distancing themselves from reusable cutlery as food service businesses gradually are allowed to reopen in various parts of the world. The short-term prospects of the disposable cutlery industry are likely to be positive, as environment consciousness takes a backseat to virus transmission concerns.

Initiated in October 2019, the Bio-Plastics Europe Project has been a major force behind research on the use of bioplastics in a range of end use sectors including disposable cutlery, in terms of biodegradability of alternatives to conventional plastic. The endeavor is likely to play a role in future EU policies towards plastics and recycling. The project has also resulted in the establishment of the EBRN and HISCAP networks for research on plastic waste, which could create new, viable opportunities for disposable cutlery manufacturers in the region in the near future.

On the other hand, a new study by the Goethe Universität in Frankfurt, has come out with results stating that bio-plastics may not make much improvement in terms of environment protection, with cellulose and starch based plastic alternatives, holding significant chemical load, while also generating higher toxic reactions, when tested under laboratory conditions. The development could have potentially negative ramifications for the disposable cutlery market.

In September 2020, GreenTek Packaging LLC launched its new Hemptencils range of disposable cutlery and utensils, manufactured from industrial hemp, which is 100% percent biobased and petroleum free. The products are aimed towards distribution for grocers and restaurants. On a similar note, Foodstiks has also revealed its new range of 100% natural, renewable, and compostable wooden cutlery, which are available for retail in bulk, aimed towards take out and deli end users.

There has been a considerable shift in the consumer consumption patterns in the food and beverages sector. On an average, online food delivery platforms in emerging countries such as India, offer over 40% return on investment. This is leading to an intense competition across food delivery platforms among food service companies, and ensuring lucrative opportunities for manufacturers of food disposables and single-use cutleries.

Consumer preference for takeaway or ready-to-eat food is increasing particularly in emerging economies, attributable to the growing disposable incomes. Moreover, corporate work culture increases adoption of out-of-home food habits, which is also anticipated to strengthen growth of the disposable cutlery market over the forecast period. 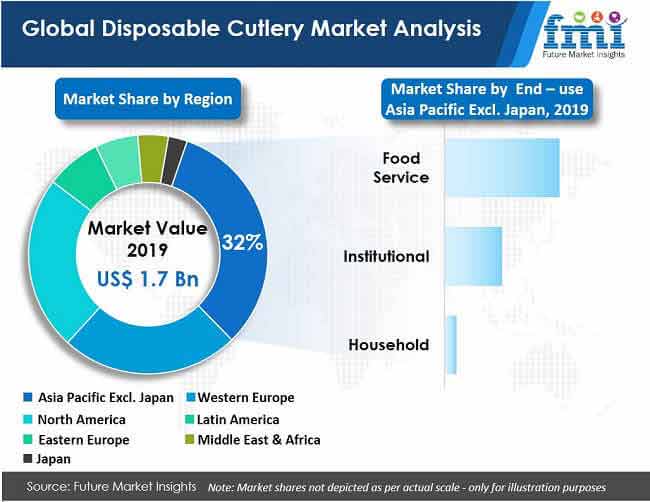 What are future prospects for the disposable cutlery market?

The disposable cutlery market is anticipated to witness a steady demand, and is projected to generate an incremental opportunity of more than US$ 1 Bn by 2028.

Which region is expected to generate the highest sales in the disposable cutlery market?

The APEJ region is expected to witness maximum growth in the global disposable cutlery market, attributable to the increasing number of foodservice outlets and the ongoing on-the-go meal trend. Fast-paced lifestyles, increasing disposable incomes, and easy access to retail outlets have further fueled the demand for disposable cutlery in this region.

The foodservice industry is estimated to hold the lion’s share in the global disposable cutlery market, and is projected to remain the most lucrative segment throughout the forecast period. Moreover, the foodservice industry is expected to generate an impressive incremental opportunity in the next five years, as disposable cutlery is suitable for ‘grab-on-the-go’ consumption.

What is the intensity of competition in the disposable cutlery market?

What are the key factors shaping the dynamics of disposable cutlery market?

Fast-paced lifestyles, and high demand for eco-friendly disposable cutlery from the foodservice industry is anticipated to boost the sales of disposable cutlery. Companies are focused on introducing products with new textures, graphics (on-pack promotions), eye-catchy colours, and innovative designs to influence consumer purchases and differentiate their product offerings in the intensely competitive market.

The global disposable cutlery market is segmented in detail to cover every aspect of the market and present complete market intelligence to readers.