Further, with many big drug makers establishing a local manufacturing presence across various regions, the adoption of controlled release technology is expected to witness a growing spiral in the coming years especially in countries such as Brazil, Argentina, Costa Rica and Mexico.

The combination of various technologies helps in rapidly overcoming problems associated with poorly soluble candidates. This is being aided through greater technology sharing through various conferences and symposiums where companies sharing similar thought processes meet and plan eventual outcomes. This helps in better pricing and rapid time to market for the otherwise unviable products in the short run. A higher adoption of combination approaches is expected to boost the global market for oral controlled release drug delivery technology.

Increasing approvals of modified and extended release oral dosage forms by PMDA is likely to drive the growth in revenue of the Japan oral controlled release drug delivery technology market. In the case of new approvals, high preference towards tablets and capsules has been observed, as formulation scientists find it easy to create formulations for clinical as well as therapeutic use.

Moreover, when compared to western countries such as the U.S. and Germany, Japan offers greater variety in the choice of oral solid dosage forms due to increased accessibility to local formulations.

Large-scale requirement of anti-hypertensive drugs are likely to boost the market growth to a great extent. The large-scale requirement of anti-hypertensive drugs is fuelling the need for more companies to set up plants deploying controlled release technologies. The requirement is more for technology adoption of OROS and SODAS. Indigenous development of pharmaceutical infrastructure is a very important factor expected to fuel revenue growth of the oral controlled release drug delivery technology market.

The Dissolution Controlled Release System segment dominated the global oral controlled release drug delivery technology market in terms of revenue in 2017, and the trend is projected to continue throughout the forecast period. Dissolution Controlled Release System is the most attractive segment, with an attractiveness index of 3.6 over the forecast period. This segment accounted for close to 45% value share in 2017 and is projected to hold about 50% share by 2027 end.

The Others segment, which includes upcoming technologies such as nanotechnology and other advanced matrix technologies is also growing at an exponential rate in terms of revenue in 2017 and the trend is projected to sustain throughout the forecast period. The Others segment is the most attractive segment, with a market attractiveness index of 0.6 over the forecast period. 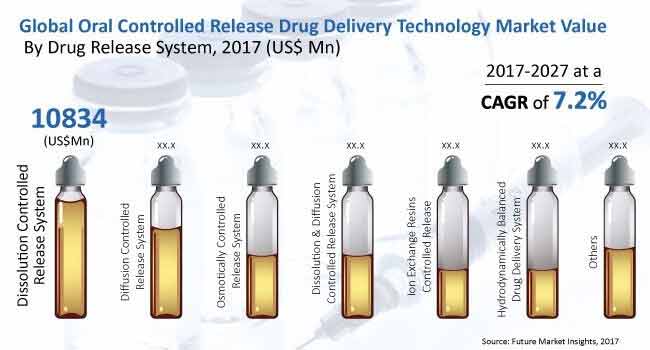 Controlled Release is the most common strategy adopted by pharma giants across the globe to extend the product life cycle. Modified or controlled release formulations of pre-approved drugs are enjoying extended market exclusivity. The introduction of proprietary prescribed medicines in controlled release forms will help drive revenue growth of the global market.

Other release mechanisms include enteric release, such as those used in enteric softgel capsules, osmotically active release, effervescent and sublingual release. OROS (Johnson & Johnson and Alza Corporation) and SODAS (Elan Technologies) are the most commercialised technologies in the oral controlled release drug delivery technology market.