Penetration Testing Market: IT and Telecommunication Projected to Remain the Second Largest Vertical Segment in Terms of Revenue During the Forecast Period: Global Industry Analysis (2012 - 2016) and Opportunity Assessment (2017 - 2027)

In terms of value, the BFSI segment is projected to be the most attractive segment in the global penetration testing market over the forecast period. This segment is likely to be valued at more than US$ 95 Mn in 2017. In 2016, the BFSI segment was the dominant segment, valued at more than US$ 85 Mn, and is expected to remain dominant in terms of revenue throughout the forecast period. In 2027, the segment is expected to cross US$ 370 Mn, contributing to the growth of the global penetration testing market. 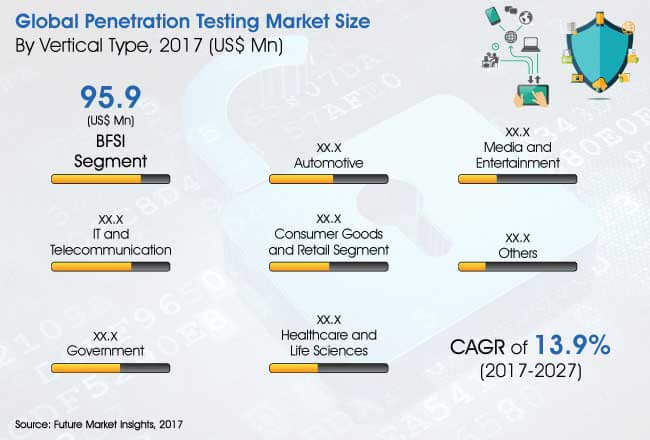 The usage of cloud computing solutions is increasing rapidly across the globe, as the cost of cloud-based services is comparatively cheaper, and does not require the setting up of dedicated IT infrastructure. The increasing usage of cloud-based solutions and services for multiple workloads such as email services, data backups, CRM, and collaboration services is expected to drive the growth of the penetration testing market in the near future. Cloud deployment increases the vulnerabilities in software, and makes it easily accessible for unauthorised users.

Highly publicised data breaches involving large corporations targeted by hacking groups have contributed to raising the awareness of cyber threats, as the effects of data breach on a company’s brand and customer loyalty can result in the loss of future revenue. Due to this, many organisations are shifting towards the adoption of cyber security solutions such as penetration testing, intrusion detection systems, and firewalls, to secure their workloads on the cloud without the risks of cyber threats.

Social media is one of the world’s fastest growing phenomena, with most individuals and businesses now having some form of presence on various social media platforms, including Facebook, Twitter, and LinkedIn. With the help of such sites, business-critical information can now enter the public domain faster than ever.

Thus, to handle social media efficiently, various organisations around the globe are improving security processes to harness the power of these platforms while minimising risks, by implementing comprehensive cyber security solutions to enhance performance and produce security intelligence.

Healthcare organisations are required to upgrade their IT infrastructure to facilitate the shift to IoT in order to keep up with the increasing adoption of connected medical devices. This technological advancement enables efficient management and security measures of information and data in the healthcare sector for patients and service providers.

At the same time, the adoption of connected devices opens up avenues and loopholes for hackers to steal data, such as patient records, and disrupt the services being offered by healthcare service providers. As a result of such cyber threats, healthcare organisations adopting connected medical devices also prefer to implement cyber security solutions.

In January 2015, the cyber security basic act was passed to comprehensively plan roles and responsibilities of the government in providing national security. This act encourages infrastructure providers as well as educational and research institutions to implement appropriate security measures to protect their critical data from security threats.

Laws in UAE have penalised any act that results in suspending, disabling or destroying a network, causing partial or complete loss of data. The law also has provisions to penalise anyone who is convicted of obstructing access to computer networks or of using their knowledge of cyber technologies for any sort of criminal activity.

In April 2017 Singapore made changes to its computer misuse and cyber security act to criminalise the act of using and trading data with a criminal intent.