Despite challenges posed by covid-19 outbreak, the market is likely to gain impetus, exhibiting 11.1% year-on-year growth in 2021.

Growth predictions remain positive for North America due to increasing concern towards animal welfare and environmental sustainability. Spurred by this, North America is anticipated to register a CAGR of around 9.7% during the forecast period 2021-2031.

The global plant based ice creams market is anticipated to register a CAGR of approximately 9.3% during the forecast period between 2021 and 2031. Increasing consumer inclination towards vegan based products is garnering revenue in the plant based ice-creams market.

Shift in the consumer buying behavior has compelled manufacturers to focus on producing low-sugar, less processed ingredients and label-free ice-creams, which is expected to boost the market growth in the forecast period.

Increasing consumption of fruit bars, nondairy desserts, keto ice cream cakes have contributed in spiking the sales of plant-based ice creams. The m market is expected to evolve in the future as some of the leading companies join the bandwagon of introducing plant-based ice cream.

For instance, Froneri, an ice cream manufacturer, owned by R&R and Nestle, has introduced a novel-plant based ice cream range ‘ROAR’. It has been made available in flavors ranging from hazelnut chocolate cookie, hempseed chocolate brownie to coconut mango passion fruit oat cookie.

The new brand has teamed up with Panthera’s as a financial sponsor supporting the Tigers Forever fund, in order to help increasing the number of tigers by 50% in the next ten years.

The plant based ice creams market is expected to flourish in the forecast period owing to the increasing demand across the globe. 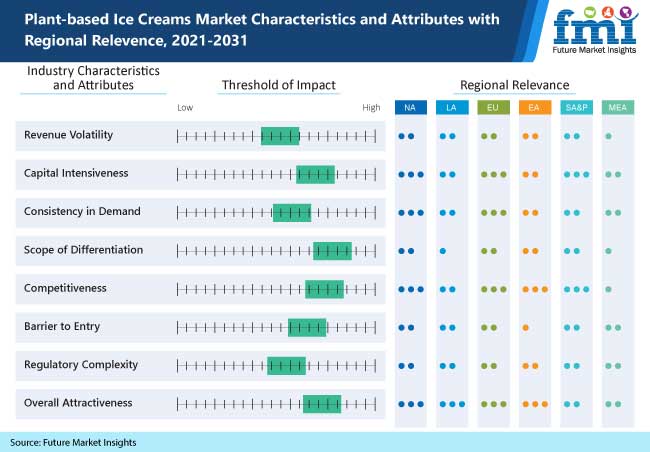 In recent times, with growing popularity of organic milk and milk powder obtained from cows fed with organic foods, organic ice creams have been gaining increasing momentum. However, another segment of consumers inclined towards the ‘vegan’ culture are continually demanding plant-based ice creams.

Growing concerns of animal welfare issues in food & beverage industry, reduction in intake of animal-based products, and rapidly widening range of alternatives have led to rise of vegan culture, and subsequently to plant-based ice creams.

As studies continue to link vegan diet with healthier, longer life, the demand for plant-based ice creams is expected to be strong going forward.

In addition, the plant-based ice creams market is projected to benefit from significant increase in lactose intolerance among growing number of consumers, which has resulted in increased sales of vegan cheese and plant-based protein beverages.

Coconut Milk To Stay In Demand Against Soy Milk

Coconut milk and cream remains the base of choice for plant-based ice creams, owing to less air which makes the products denser than other dairy alternatives.

Emergence of Southeast Asia as the world’s top producer of coconut has attracted huge attention from the market players. Soy milk is also one of the most commonly used creaming ingredient in plant-based ice creams.

However, several adverse effects associated with soy milk are expected to decelerate its sales for use in plant-based ice-creams.

As innovation is becoming increasingly important to align with ever-evolving trends and drive profit margins, a number of traditional ice cream manufacturers are venturing into the new market.

Like any other plant-based or natural products, plant-based ice creams are deemed to offer a number of functional benefits over conventional ice creams. In addition, frozen dessert companies are reformulating ice cream to appeal to health- and eco-conscious consumers.

However, formulation of plant-based ice creams are far more complicated than their conventional counterparts, leading to high processing charges.

Removing dairy from ice cream further results in complicated food label as more ingredients are required to produce preferred taste and textures. These factors are expected to represent a potential threat to sales of plant-based ice creams.

Marketed towards a myriad of consumers concerned about environmental issues and making choices to avoid animal-based products for ethical reasons, the plant-based market is set to be a multi-billion dollar business in foreseeable future.

Key Questions Answered In The Report