Efficient and reliable source of power supply is crucial to guarantee successful operations in the military and defense sector. Consequently, the sector has emerged as a lucrative avenue for compact, low-maintenance, and possibly transportable generators that can offer continuous or emergency power supply as required.

The market offers significant scope for the implementation of improved technologies and footprint expansion. With various governments around the world increasing their military expenditure, the demand for advanced and tactical equipment will rise.

Market experts see the ongoing trends as highly favorable for the growth of Military Power Generator Market within the military and defense sector. Future Market Insights’ (FMI) study on the subject has forecast the market to progress at 3.4% CAGR between 2020 and 2030.

Experts project that a grand transformation is underway. The wave of decentralizing energy, which has swept across the world, is revolutionizing the way power is generated and consumed.

Resultantly, some key government organizations, including military agencies, are swaying away from centralized energy systems to integrated power solutions such as microgrids.

The military sector is keen on suitable provision for secure energy to cater to their growing needs in a way that will also help them mitigate adverse effects on environment. A failure in meeting this requirement will pose immense threat to functioning of various defense operations.

Installing power generators is therefore a favored method for improving environmental, economy, and energy-security performance within the sector.

The demand for distributed energy is surging in the military sector. Its application in tactical military communication, fields, camps, and bases, field hospitals, and command systems is surging at a steady pace – a trend which is unlikely to slow down in the coming years. Power generators are therefore considered extremely crucial for hindrance-free operation within the sector.

Also with rising troops deployment overseas, coupled with the need for various modern warfare equipment, will make power generators indispensable for the industry.

Governments across prominent countries have taken a note of this. Resultantly, their military expenditure has increased considerably. Strengthening their defense systems is their foremost priority and to achieve this they are likely to invest in robust power military power generation equipment in the coming years.

Some of the most celebrated military agencies around the world are focusing on establishment of integrated power systems such as microgrids to accommodate advanced power generators.

Installation of hybrid generators can help these organizations to reduce expenses incurred on procuring fuel as well as curb the creation of carbon footprint. Against this backdrop, experts opine the demand for hybrid generators to surge in the coming years. This will in turn create lucrative growth prospects for the market.

An increasing number of military and government agencies are experimenting with novel and more sustainable sources of power. The rising investment towards wind farms and military solar power generator systems due to the limited availability of commercial energy sources is threatening growth of the market.

Military forces are keen on green energy sources and reducing their carbon footprint. As a result of this, the increasing deployment of renewable sources of energy across military bases could hamper the growth of the market.

Immense focus on strengthening their countries’ defense sectors will steadily increase military expenditure. This will in turn aid the expansion of the market for power generators. FMI projects that field camps and accommodation will account for increasing number of power generator installations in North America’s military sector. 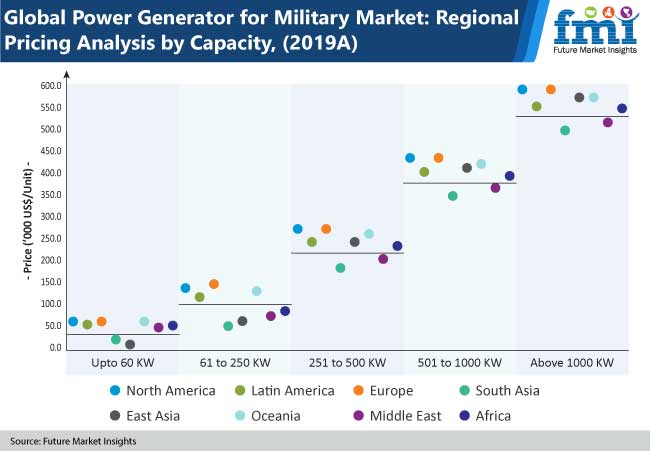 Growth witnessed in the Europe market is expected to remain steady. Recent global events have catapulted national security issues in Europe to the fore.

A considerable part of budget allocated to military expenses is spent on equipment vital for military operations. Therefore, with the rising defense budget across major nations, Europe is expected to remain one of the highly lucrative markets for power generator for military.

The market in Asia Pacific is expected to record growth at the leading space in the market. The rising demand from countries such as India, Japan, and China will bolster growth prospects for the market in the region.

Defense spending in these three countries is considerably high and they are home to most powerful forces of military in Asia Pacific. The Chinese Army for instance is the second-largest military force in the world, following the U.S. Army.

Governments across these countries allocate substantial amount towards their defense budget each year. As a result of this, manufacturers of power generators can expect high demand from these nations.

In terms of capacity, the up to 60 KW segment holds the leading share in the market on account of compact design and fuel efficiency of these generators. These are used in diverse military applications such as communication and control systems, air defense systems, and temporary base camps.

Preference for AC over DC Intact

Based on output, the AC generator accounts for nearly 3/4th share of the overall market. Military agencies across the world mostly prefer AC generators over DC because of their utility across diverse applications. AC generators, unlike DC generators are more compatible with variable power output.

Diesel over Petrol for Cost-Efficiency

Based on fuel type, diesel accounts for the lion’s share in the market. Diesel generators are often primary choices for military agencies since there are more reliable and are suitable across multiple applications.

It is also easier to transport diesel at remote locations. Driven by this, the diesel segment will continue dominating the market through the coming years.

Mobile and Portable in Vogue

In terms of installation type, mobile and portable generators account for the maximum share in the market. Military portable power generator are more compatible with a number of military operations as compared to stationary generators.

They find application across multiple sectors within military agencies, which is favoring greater investment towards mobile and portable generators.

Application in Camps and Hospitals Growing

Based on application hospitals and camps/accommodation remains the key segment in the market. The rising instances of border conflict are leading to increasing deployment in remote locations.

Distributed power systems are used to fulfil the need for electricity in accommodations and hospitals in such remote locations. Collectively, field camps/ accommodation and field hospitals are expected to account for the leading share in the market.

Companies operating in the market are continuously striving to offer advanced power generation system with high output and low operational cost. In the near future they are likely to focus more on the manufacturing of hybrid generators.

Overall the focus on portfolio and footprint expansion is forecast to remain high in the market. Mergers and acquisitions make a key strategic moves adopted by the companies to gain competitive advantage. Besides this, product launches will remain a key strategy adopted by the market players.

Caterpillar Inc. introduced CAT INV2000 in December 2019. It is a portable generator.