Power Liftgate Market - About the Report

[258 Pages Report] Automakers around the globe are introducing new features in their offerings, by using latest tech to offer added convenience to consumers. While power liftgate may not have received the same attention as power windows or power steering, newer models have this feature more often than not. Considering the significant potential for growth, OEMs and suppliers are working toward offering variants that are transformative, or at least, are alluring to the potential consumers. Future Market Insights’ new study tracks power liftgate market growth for the period 2020-2030, along with a detailed COVID-19 analysis. The study also offers lucid assessment on the strategies of key market players.

In the past few years, prior to the pandemic the power liftgate market has displayed steady growth, driven by rise in disposable incomes and the growing numbers of car sales, especially in developing economies, and innovations in sensors and electronics in newer vehicle models.

According to the India Brand Equity Foundation per capita disposable incomes in India has risen by around 4% CAGR to over US$ 630 by 2020. This period also reflected an increase from approximately 25 million units in car sales in 2018 to over 26 million in 2019. Similarly, as per a UN report, Mexico has reflected a 2.6% increase, while Turkey displayed a 1.4% rise in per capita disposable income. Despite the decline in 2020, sales figures are likely to recover over the forecast period.

According to analysis by Future Market Insights, the power liftgate market will reach US$ 2.3 billion by the end of 2020. Growing sales of luxury vehicles will support long-term growth in the industry. Investments made in recent years on the incorporation of automation and electronic technologies in new vehicle offerings have been key drivers for the industry.

For example, Renesas Electronics Corporation joined hands with China FAW Group Corp. for the development of a joint laboratory in Changchun China for electronic control units for intelligent driving platforms.

Power liftgates are electromechanical devices that are used to control back doors in passenger cars and commercial vehicles. Recent improvements in terms of electric latches, torque cables, direct units and touch sensors have bolstered adoption rates in the automotive sector.

The growing transition towards electric cars, and other autonomous and semi-autonomous technologies, in vehicles for user convenience is expected to boost market prospects in the long term.

The rising use of commercial vehicles for ever growing volumes of domestic trade are likely to aid the industry for the foreseeable future. As per the International Organization of Motor Vehicle Manufacturers, global commercial vehicles sales witnessed an increase of over a million units between 2018 and 2019.

Modern power liftgate designs are aimed towards reducing space and weight of components, which has long been a concern for automotive OEMs, especially for luxury car models. Novel product designs with composite designs and anti-corrosion coatings have aided in improving fuel efficiency, bolstering prospects of adoption.

Rising levels of disposable incomes globally, and the consequent increase in demand for luxury passenger car models have had a hand in consumer preference for power liftgates. For example, Porsche delivered a record 10% higher deliveries in 2019 as compared to 2018. BMW and Mercedes also had a ninth consecutive record year in 2019.

Also, modern luxury cars are manufactured with the latest in AI tech to minimize risk of accidents and to handle safe loads of goods in rear portions of the vehicle. This factor is likely to aid market growth in the years to come.

Other newer models are even touch-free, requiring only hand gestures to activate power liftgates. Ford has revealed touch-free lift gate models for its Everest and Escape car models in the year 2020. Also, the Honda CR-V 2021 model is slated to have a hands-free power lift gate. However, issues in terms of fluctuating performance of sensors and prohibitive costs of configuration limit the adoption of hands-free power liftgates, especially in lower end vehicle models.

With growing interest in automation technologies by vehicle owners in recent years, the demand for power liftgates has jumped in automotive markets around the globe. Manufacturers are also expected to face certain obstacles in the near future. High costs of development for varying vehicle models, for instance is a major challenge.

North America is a leading market for power liftgate mechanisms. The region is projected to account for more than 35% of the overall market share between 2020 and 2030. The sales of many large luxury vehicle models in the United States have risen in 2020, with the Audi A8, BMW 6-series, Jaguar XJ, and Tesla Model S reflecting major increases over sales figures of 2019.

Further, Mercedes has gained from a new lineup. The sales of the 3-row GLS rose by 36% in the 2nd quarter of the year. The transition towards electric and hybrid automobiles have been major growth drivers in the region.

The North American power liftgate market is also expected to be influenced by the presence of several leading automotive OEMs and automation technology developers, especially in the United States. Strict road safety rules and innovations in advanced driver assistance systems with AI and IoT improvements are likely to drive the power liftgate industry here. 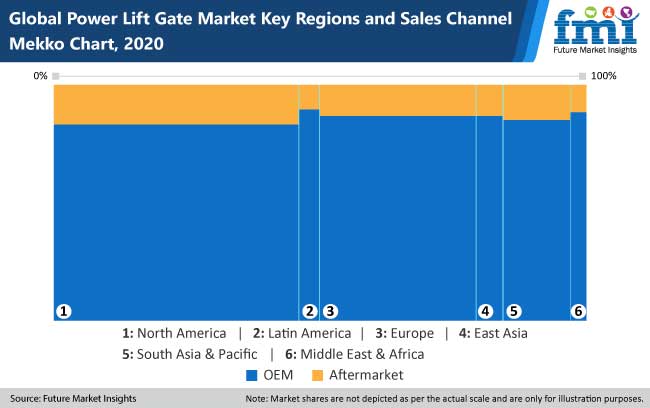 Tesla has revealed the installation of power liftgate for disabled Model 3 buyer for trunks and frunks to improve access. Such tests are likely to have a positive impact on the power liftgate market in the long term here. Similar additions, have been made by Ford for its 2020 Escape SEL offering and Toyota for its 2021 Sienna model for its United States customer base.

The European market for power liftgates is the second largest following North America, reflecting a projected growth rate of over 7% CAGR through the forecast period.

According to the FMI report, the sales of luxury cars have witnessed an increased from over 410,000 units in 2019 to approximately 414,000 units in 2020. This increase is likely to positively influence market growth during the forecast period

According to the International Council on Clean Transportation, continuing concerns over Brexit have limited the automotive sales in the UK by 7%. However, Spain witnessed a 7% increase.

Further, new mandatory emission standards for 2025 and 2030 in the EU have been adopted in early 2019. The change is likely to improve the prospects of power liftgate sales through the forecast period, in the post-pandemic era.

Led by China, East Asia is reflecting a faster rate of growth in the power liftgate market in comparison to other regions at close to 10% CAGR. Improvements to disposable income levels, especially among the middle class and the resultant increase in demand for tech improvements drive the market. According to the Global Economy and Development, Center for Sustainable Development over 52% of spending gains in the past decade have been accrued by the global middle class.

Further, major international automotive OEMs have moved a large portion of production activities to the region to capitalize on costs of labor and material. For instance, General Motors has invested in local production facilities and joint ventures with Chinese companies to minimize tariffs. Similarly, Tesla is in the process of completing its Gigafactory 3 production plant in Shanghai to partially avoid tariffs. Audi cars are also produced in China under the SAIC Volkswagen partnership. Further, relatively relaxed regulations in terms of industrial operations are expected to aid stronger growth for the duration of the assessment period.

OEM Accounts for Bulk of Revenues

The power liftgate market is classified on the basis of sales channel into OEM and aftermarket. The OEM segment accounts for more than 90% of the overall market share, while also displaying a relatively faster rate of growth through 2030.

The growing emphasis on investments made towards research and development for novel design and tech innovations in automotive offerings is a major factor that will drive demand in the near future. Further, interest in retrofitting activities will boost aftermarket demand.

In terms of vehicle type, power liftgates market is classified into passenger cars and commercial vehicles. Of these, passenger car applications will be key to revenue generation for the foreseeable future, at a valuation of more than US$ 1.7 billion in 2020.

Power liftgates can be largely classified on the basis of product type into automatic and semi-automatic variants. Semi-automatic power liftgates will hold major market share through the projection period. The segment accounts for over US$ 1.6 Bn in 2020.

The demand for semi-automatic power liftgates for the entire forecast period is projected to decline steadily with improvements in automation technologies, and the growing adoption of fully automatic offerings.

Leading players in the fragmented power liftgate market have been largely pushing with product development and launch strategies, with improvements in terms of automation technologies and materials gaining importance. Mergers and acquisitions are also likely to gain attention in the years ahead to consolidate market position.

For instance, Magna International Inc. unveiled a thermoplastic power liftgate for use in the 2019 Fiat Chrysler Automobiles Jeep Cherokee SUV. The design is expected to cut mass and costs of capital and tooling through improvements in terms of manufacturing efficiency and integration of essential parts, with proprietary tethering attachments.

Stabilus North America announced the opening of a new Michigan based distribution center in August 2019. The new facility has been developed to provide support for its power liftgate and OE lift support products for retail and wholesale applications.

Brose Fahrzeugteile has unveiled its new power liftgate offering for its Escape SUV model, which includes motion sensors that operate similar to a Wii sensor bar along the rear of the vehicle at bumper level, which requires a kicking gesture to open or close.

Aside from these market players, other leading companies in the market include:

The list is only indicative – full list of power liftgates market key players is available upon request.

What is the size of the power liftgates market?

Which is the largest market for power liftgates?

US is likely to remain the largest market for power liftgates during the forecast period, owing to growing consumer preference towards the adoption of new automotive technologies. In addition to the US, Germany, France, UK, China, and India are among the top markets.

Which are the top companies in global power liftgates market?

What are the applications of power liftgates?

What is the near-term competitive outlook of the global power liftgates market?

The global power liftgates market is moderately fragmented, with product launch and development strategies gaining importance, in addition to mergers and acquisitions to consolidate market position.