For example, Red Bull is posting videos on the twitter feeds of people who have viewed extreme sports sites. Thus, programmatic displays enable marketers to bid on influencer ads programmatically in real-time and buy branded content the social media pages, blog pages and websites of influencers. Besides this, technological developments and the substantial availability & usage of smart devices are other factors propelling the global programmatic display market in terms of value.

The global programmatic display market is estimated to be valued at US$ 21,829.3 Mn by the end of 2017, and is expected to expand in the coming years at a CAGR of 35.5% in terms of value during the forecast period. The global programmatic display market is expected to represent a high incremental opportunity between 2017 and 2027.

Another important factor that is driving digital video consumption is the rise in Video on Demand (VoD), which includes Netflix, Amazon Prime Video and TV catch up services. These platforms are increasing the opportunities for brands to advertise digitally through videos, which is also significantly boosting the programmatic display market. 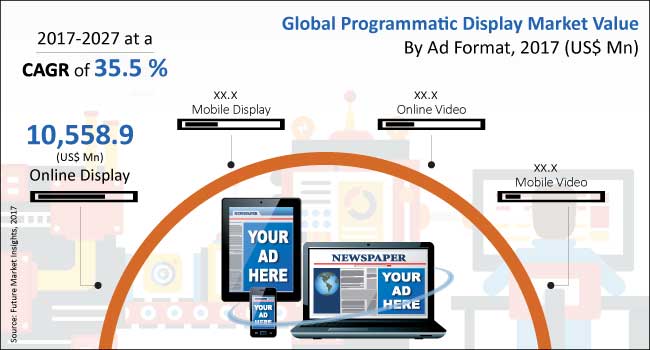 Government initiatives in the APEJ region toward digitisation are implemented by leveraging the common and support ICT Infrastructure, and are resulting in the usage of emerging technologies such as cloud and mobile, thus creating an opportunity for the growth of programmatic display advertising on these platforms.

In July 2015, India launched the Digital India Programme, an initiative to transform the region into a digitally empowered society and knowledge economy, which has resulted in the growth of the programmatic display market.

Vendors in the programmatic display market are now focusing on introducing advanced technologies to enhance customer experience in the retail sector.

Vendors are continuously innovating their programmatic display solutions to penetrate the technology-influenced market. Several vendors in the programmatic display market are focussing on partnerships on a global level to expand their businesses and increase their customer base. Some of these deals are listed below: