It is a transparent band to assist hemostasis of the radial artery after a transradial procedure. This transparent structure is designed for visual control and selective compression of the radial artery to allow blood return and preserve patency. This type of band is easily adjusted to any of the wrist sizes. The band based segment is the largest segment by product type, which is expected to be valued at more than US$ 260 Mn, or a little over 80% of the global market share, expanding at a CAGR of 8.4% over the forecast period.

The band/strap based segment is expected to create absolute $ opportunity of more than US$ 5 Mn in 2017 over 2016. The segment, in terms of revenue, is anticipated to dominate the global radial compression devices market with an attractiveness index of 2.4 over the forecast period.

Use of radial bands reduces hospital stay and thus helps patients save on hefty hospital bills. This is the precise reason that the adoption of band based products is fast gaining popularity over other traditional approaches. This particular factor is boosting the adoption and revenue growth of the band based segment in the global radial compression devices market. An increase in life expectancy leads to a rise in the global ageing population, which implies an increase in the number of patients with cardiovascular diseases.

The rise in cardiovascular diseases due to increased life expectancy is expected to propel the development of the band based segment during the projected period. Radial access such as band based products provides faster mobility to patients as the incision is smaller and the chances of infection at the site is much lower in radial access as compared to transfemoral access. These factors are likely to fuel revenue growth of the band based segment over the forecast period. Market players also focussing on providing more improved radial compression devices.

Due to the greater reduction in bleeding and low incidence of complications, the penetration of radial compression products such as bands has increased remarkably after 2011. This is anticipated to create a robust development in the band based product type segment. Higher band based devices adoption in matured markets is expected to continue in the same momentum, given the largely associated benefits. 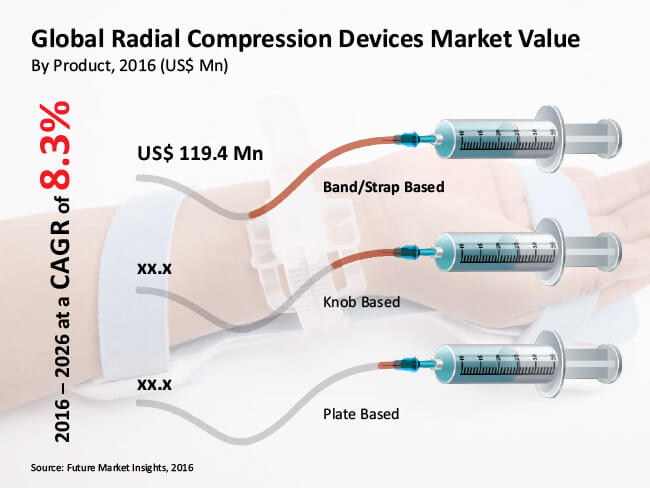 The major value share of the band based segment in the global radial compression devices market is likely to be grabbed by the APEJ regional market where the segment is predicted to reach a value share of more than 85% by the end of 2026. The band based segment is likely to dominate the radial compression devices market in Japan in revenue terms with an attractiveness index of 2.4 over the forecast period.

The segments covered in our report are as under