Retail Automation Market: FMCG Projected to be the Most Attractive Segment by Industry During the Forecast Period: Global Industry Analysis 2012 - 2016 and Opportunity Assessment 2017 - 2027

Retail Automation Market: FMCG Projected to be the Most Attractive Segment by Industry During the Forecast Period: Global Industry Analysis 2012 - 2016 and Opportunity Assessment 2017 - 2027

The manned POS terminal segment is expected to account for a sizable share of the overall Retail Automation market in 2017, but is expected to foresee a decrease in the growth rate yearly, due to the embellishment of unattended terminals by the end of the forecast period.

Such high growth rates are primarily driven by the transformation in the customer shopping preference and high preference given to smart device enabled retail shopping.

Several supermarkets and hypermarkets in developed countries are adopting the Retail Automation technologies such as motorized transport units that assist the customers in inventory management and product delivery to customers. Such developments in reference to the FMCG industry are impacting the overall Retail Automation market in a positive manner. 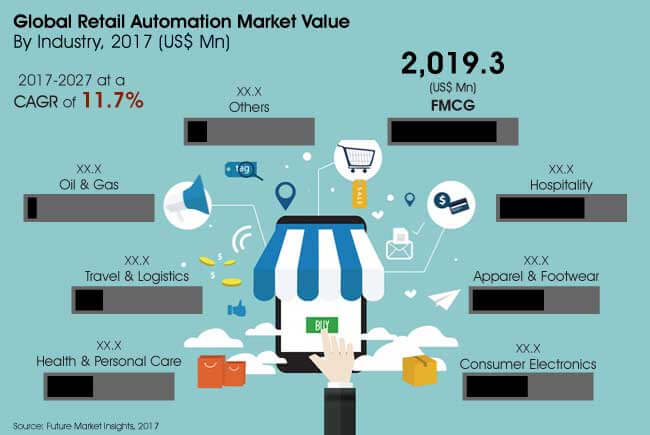 For instance, Wal-Mart patented a "motorized transport unit" system that can attach to shopping carts, enabling them to drive and dock themselves. These motorized units may potentially be used to move containers; scan, retrieve, and deliver products; check inventory; retrieve trash; and even connect with customers. North America is expected to be followed by Western Europe in the Retail Automation market, in terms of revenues generated.

The APEJ region is expected to present attractive opportunities for Retail Automation manufacturers during the forecast period, and is estimated to expand at a significant CAGR in terms of value.

Vendors are continuously innovating their Retail Automation solutions to penetrate the technology influenced market. In August 2016 Lowe's Companies, Inc. that operates a chain of retail home improvement and appliance stores introduced a personal assistant robot, called LoweBot, a NAVi autonomous retail service robot to assist customers, with Retail Automation. Many such vendors are providing robots to retail stores to assist the customers.

These robots not only help in guiding the customers but also in managing the back-end inventory, facilitating the Retail Automation market. In February 2017, NCR Corporation introduced NCR ENCOR, to provide a store management solution for small and medium sized retailers in North America. NCR ENCOR, being a Retail Automation solution provides point of sale, front office and back office functionality and security and versatility for an enhanced consumer experience in the retail sector.

Many vendors in the Retail Automation market are focusing on collaborations, mergers and acquisitions in order to improve their product offerings, distribution capabilities, and to expand customer base. With respect to Retail Automation, in June 2017, Diebold Nixdorf collaborated with Samsung to eliminate the need of card/PIN and enable card-less mobile transactions. Diebold Nixdorf adopted Samsung’s SDS Nexsign, enabling facial recognition, to provide a secure card-less transaction.

In August 2016 the company completed its $1.8 billion merger with Germany’s Wincor Nixdorf, which brought together two leading competitors in the Retail Automation market. In March 2017, Fujitsu launched its wearable products, which can be effectively connected with the company’s self-checkout systems, resulting into the elimination of the outdated methods of sharing information.