The universal serial bus (USB) has witnesses continuous evolutions, and the USB type C is the fifth iteration of the technology, which has increasingly become a very popular option not only charging but also data transfer applications.

The technology is compatible with devices including tablets, smart phones, and computers, and is expected to eventually replace the conventional USB connectors in the years to come.

According to a recent report published by Future Market Insights, the USB Type C market is expected surpass US$ 127 billion by 2030 at 29% CAGR, with applications in the telecommunication industry gaining major market share.

The market for USB type C technology has shot up in recent years as a number of brands in the electronics and, automotive, and telecommunications industry adopt these connectors, with performance surpassing other USB competitors and even other charging devices available with Apple devices.

USB C has rapidly become a mainstream option in most phone, laptop and tablet devices. Even some models of Macbooks have been designed to have a USB C Port.

A majority of USB C ports are now built on the 2nd Gen USB 3.1 data transfer standard. Consequently, these USB C devices can theoretically deliver up to 10 Gbps of data, which is estimated to double that of older USB 3.0 and the 1st gen USB 3.1 options.

USB Type C specifications are also being increasingly used to being compatible with technologies such as Intel’s Thunderbolt 3, which can further increase data transfer speeds by 3 times.

Such improvements to data transfer speeds have become increasingly important with, ethernet capabilities and applications in high definition video streaming becoming commonplace with HDMI, and DisplayPort protocols among others.

While applications of USB type C in consumer devices have risen strongly to become mainstream, the demand for USB C type power delivery ports for automobiles in entertainment and infotainment systems is also gaining ground.

USB type C technology is increasingly being used by drivers and passengers to fast charge devices in addition to new applications such as rear seat displays and smart mirroring for entertainment applications.

Such power sources support dynamic load sharing and compatibility with a wide range of power delivery protocols, with VIN and thermal power throttling.

Innovations in these products towards voltage compensation and temperature protection on changing currents, and on the basis of changes in cable lengths, which will provide impetus to the market in the long term.

The USB type C technologies have largely become mainstream, and are expected to become the primary USB format in most end use industries through the end of the forecast period.

However, in terms of consumer electronics, the use of USB type C remains limited in Apple devices, many of which continue to operate on the company’s proprietary Lightening connector format.

The North America USB C market is led largely by demand from the United States, which accounts for more than a third of the global USB type C market.

Widespread penetration of consumer electronics devices, coupled with the growth of applications in the regional automotive and healthcare applications are important factors bolstering adoption and sales. 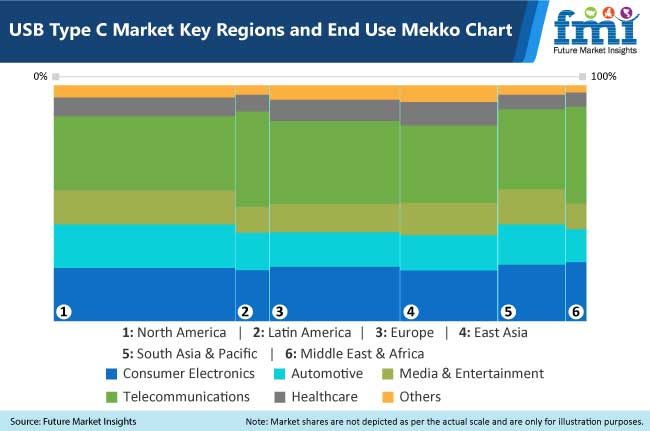 The vast consumer base, with higher disposable incomes, and the growing potential for applications even in Apple devices has sustained lucrative growth opportunities in the region.

In addition, the United States is also home to a major automotive production industry, which is expected to aid the rise of the industry in the long term.

On the other hand, strict regulations in terms of the manufacturing and e-waste are limiting the rise of the industry in the region.

Also, market players in the region are increasingly pushing for production in Asian countries such as China and India, which will slow down market growth gradually in years to come.

Following North America, Europe is currently the second largest market for USB type C. USB-C is largely the default option used by most electronics manufacturers operating in the European market. However, many low-cost smartphones continue to use micro-USB ports, which limits the USB C market.

On the other hand, the European Union has legislated regulations to standardize the USB-3 format for all phones being sold in the region to enable interoperability and to minimize electronic waste generation, regardless of the price point or the brand.

While the measure will not affect android smartphone manufacturers significantly, the change is expected to be beneficial to Apple device users, boosting the potential of the market in the region.

However, the Japan industry for USB Type C is projected to display strong growth, estimated to surpass China by 2025, and continuing to grow through 2030.

According to the Organization for Economic Cooperation and Development, major restructuring efforts in the electronics industry of the country, with a substantial shift from consumer electronics towards electronic components and industrial electronics is taking place, with domestic manufacturing being focused on high value segments. This trend will drive the long term prospects of the USB Type C products here.

In addition, High-Definition Multimedia Interface is also gaining traction on the back of adoption from prominent display manufacturers such as Toshiba, Sony, Philips, and Panasonic among others, for image-driven applications.

Of these, smartphones & tablets are currently the dominant application of USB type C offerings, which is likely to continue well into the forecast period.

However, applications in charger and adapter products are anticipated to reflect a faster rate of growth, with the value of the segment estimated to surpass that of smartphones and tablets in 2030, on the back of standardization trends in charging devices for consumer electronics.

Leading manufacturers in the USB type C market have been found to focus on investments towards product development in terms of energy efficiency and faster charging for portable devices.

Market players are also pushing for capacity and geographic expansions to keep up with the trends of standardization, and the massive demand for relevant devices.

Cypress Semiconductor for instance announced the release of two USB type C controllers for applications with laptops and desktops, under the names EZ-PD CCG6SF and EZ-PD CCG6DF for dual and single port uses with USB 3.2 configurations.

The company also released a variant of USB-C controllers for computer systems requiring the conversion of older USB-A ports to type options under the ACG1F designation.

STMicroelectronics has increasingly invested in USB-type C improvements to battery powered devices. The company unveiled its USB Power Delivery Technology, which enables convenient reuse of USB C cables and chargers with faster charging for power ratings up to 100W. The company has also unveiled port protector ICs for USB-C connections.

Texas Instruments has recently revealed a buck-boot battery charger integrated circuit, which the company claims is the smallest in the industry for power path management through USB type C and power delivery ports.

The company has also introduced two new type C and PD controllers with integrated power paths for simplified design in up to 200 W power settings.

In addition to these players, other key players are,

The list is only indicative – full list of USB type C market key players is available upon request.