Video on Demand, commonly denoted as VoD, provides consumers a way to watch their desired movies and television shows as per their own convenience. VoD services work similar to the DVR services, which enables users to record their favourite content (shows and movies) or pause it in order to watch it as per their convenience. Video on Demand (VoD) services are provided by OTT streaming service providers as per ‘pay per view’ business model. This enables users to avail their favourite content and pay for it as per their usage. 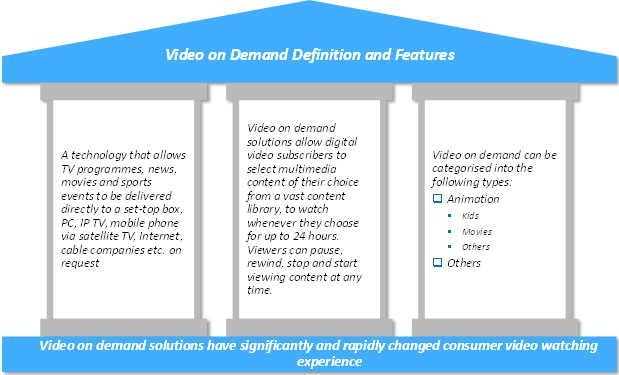 Video on Demand (VoD) Service enables users to access various type of movies and shows (irrespective of time) on demand. These include classic TV shows, television series, and movies from different decades, multi-ethnic entertainment, news, sports, and commercials. Although, VoD was originally started for movies access, with increasing demand to watch popular TV programmes including TV series and animated kids programs as per users’ convenience, VoD service providers expanded their offerings to include a diverse set of content programmes.

The global VoD service market was valued at US$ 45.03 Bn in 2014 and is expected to expand at a CAGR of 8.3% during the forecast period (2016–2026). Shift in preference of viewers from television’s linear schedule to viewing content as per their convenience and increasing penetration of high speed Internet network in emerging nations are factors propelling market growth currently.

However, with the growing popularity of top rated animation programmes such as Harry the Bunny, Numbers around the Globe, Rainbow Horse, Blue's Room and Curious George (All from the U.S.) on VoD platforms, the others segment is expected to lose a significant market share during the forecast period.

The dominance of Video on Demand (VoD) service market in North America is attributed mainly to the popularity of animation content due to the historic presence of animation content creators in this region, coupled with the lucrative deals offered by VoD service providers to attract customers and growing demand for animation series such as Ghostbusters, Batman and Avatar:

The Last Airbender on VoD platforms, which in turn is propelling growth of the North America Video on Demand (VoD) service market currently. Additionally, partnerships of content providers with the consumer electronics industry players is further encouraging the adoption of VoD service in this region.

The market in Asia Pacific (excluding Japan) is anticipated to register the highest growth during the forecast period. This is primarily attributed to the growing subscriber base of high speed Internet services in the region, creating potential opportunities for Video on Demand (VoD) service providers, including Netflix, Hulu and Home Box Office, Inc. (HBO).

In addition, rising smartphone and tablet penetration in emerging economies, such as India, China, Philippines and Indonesia, is expected to further pave way for growth of the Video on Demand (VoD) service market in the region during the forecast period.