Video intercom device has emerged as an advancement which is revolutionizing the premise and home security industry, throughout the globe. Homeowners, nowadays have a major concern regarding security while buying their homes, and prefer to go for homes with security systems at entrances and premise. Video intercom device present a solution to homeowners’ security concerns.

Video intercom device, as considered under the scope of the report, is adopted across various industries in order to provide enhanced security features to the end-users, in residential, commercial, and industrial sectors. Besides, technological developments and substantial availability and usage of smart devices with reference to security are other factors impelling the growth of the global video intercom device market, in terms of value.

Video intercom device nowadays is not restricted only to homes, offices, and shopping malls, but is gaining admiration from the local commercial spaces as well. Furthermore, adoption of advanced technologies, transitioning consumer spending behaviour for security, and increasing economic growth of the developing economies is driving the overall video intercom device market.

Handheld devices sub-segment is also expected to foresee considerably high adoption, and is expected to follow the door/entrance system sub-segment in the video intercom device market. Such high growth rates are primarily driven by the transformation in the surging crime rates and high concerns of consumers for their family’s and property’s security. 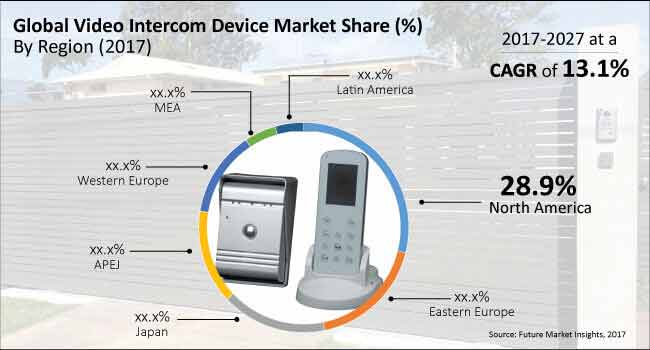 The vendors in the video intercom device market are now focusing on introducing advanced technologies to enhance customer experience in the retail sector. With emergence of technology and increasing competitive pressure, vendors are innovating video intercom device such as Panasonic Video Door security solution- VL - V590.

Vendors are continuously innovating their video intercom devices to penetrate in the technology influenced market. In April 2017, Panasonic Corporation India, which is a subsidiary of Panasonic Corporation launched VL-V590 and VL-V900. These Video Intercom Device provide a multi-door Video Intercom Device system with an electrical lock system, which offers better surveillance and security solutions to the customers.

In August 2016, Panasonic Corporation served as the official partner of Olympics which was held in Brazil. Honeywell International Inc., in March 2016 acquired RSI Video Technologies, which is a South Africa-based manufacturer of video security & surveillance systems, in order to enhance its product offerings in the video intercom device market. Godrej Group is also focussing on increasing its presence in APAC, MEA and South America markets by acquiring local players in the video intercom device market.

Storage As A Service Market