The watertight doors market worth will reach US$ 311 Mn in 2021, as per Future Market Insights (FMI) analysis. FMI projects sales of watertight doors to rise at a compound annual growth rate (CAGR) of 6.3% between 2021 and 2031.

Investment towards the re-development of blast proof and watertight doors to offer consumers with high quality products will drive watertight door sales in the coming years. As per FMI, the market will register increasing demand for marine doors and hatches equipped with hydraulic and pneumatic operation. 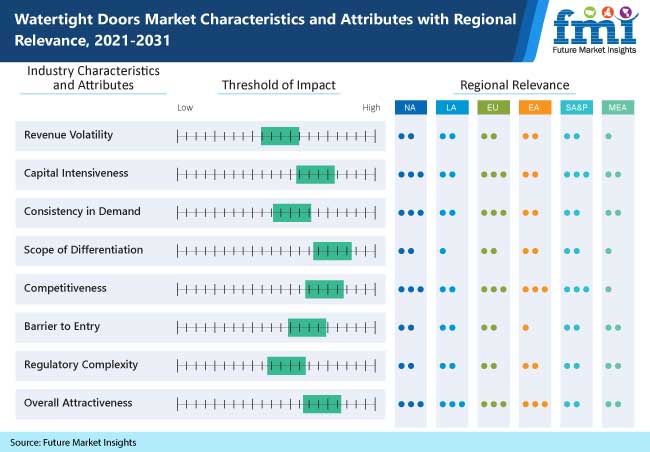 Steered by dynamic consumer preference, market players in the market are focusing on innovations and development through gaining affiliations and partnerships.

For instance, in 2018, IMTRA, a leading supplier, producer and importer of quality marine products, announced its affiliation with Libra, a Norwegian-based producer of hatches, vessel doors and storage. IMTRA will assist as an agent for Libra-brand products all across the U.S. The collaboration will foster lucrative growth opportunities for Libra by aggrandizing market share for hatches, doors and storage solutions.

Also, in 2019, AdvanTec USA Manufacturing, announced the acquisition of USA Sliding Doors Inc. The acquisition of Sliding Doors aligns with the developmental strategy concentrated on AdvanTec’s aim of being exhibited as a full-scale marine solutions provider and serve end consumers to the best of their capabilities.

Watertight doors minimize flooding during the grounding or collision of a ship or when a ship undergoes structural damage and thus, minimize the risk of sinking as in the event of severe structural damage, the ship might be flooded with water. Thus, watertight doors are crucial for all marine vessels including commercial, yachts, cruiser, coastal military patrol vessels and combat ships as they restrict the entry of water.

Coastal tourism can be defined land and sea based travel for pleasure taking place along the coast and within proximity to the sea. Marine tourism is similar to coastal tourism, but is more focused on sea-based activities. The tourism industry, from a global perspective, has witnessed healthy growth post the recession era, recording more than 1 Billion tourists for the first time in 2012 and growing at around 4% annually.

This has positively impacted coastal and marine tourism as well with Europe pegged as the worlds’ most visited tourist region. The number of tourists arriving in Europe has been growing 6% annually, according to estimates published by WTO, with a large percentage of tourists (an average of 200 Million visitors yearly) concentrating on the Mediterranean Coastal region.

This trend of tourists taking part in marine tourism has led to an increase in the sales of marine vessels such as farriers, boats and cruise ships and thus, has been indirectly contributing to the sales of watertight doors. According to a study published by E.C. 2011, more than 60% of tourists prefer to visit coastal areas over inner lands.

Global natural gas production grew by approximately 2.2% in 2015 as compared to the the preceding year, whereas the consumption of natural gas increased by 1.7% in the same time frame. Countries such as Australia, Qatar and Norway have been contributing to the increasing export of natural gas significantly.

The demand for LNG is expected to witness significant growth over the forecast period. Global trade of LNG was pegged at around 244.8 MT in 2015, with an increase of nearly 4.7 MT as compared to 2014. Numerous new liquefaction and regasification terminals that will accommodate processing facilities and bulk storing are under construction in Asia Pacific, Europe, and the Americas and are expected to start operating during the forecast period

According to reports, over 410 liquid bulk carrier fleets were active in 2015, which could meet over 30% of the global LNG demand. Also, around 416 ships were reported under construction, which are estimated to join the supply chain during the forecast period. The new construction of ships is expected to positively impact the sales of watertight doors during the forecast period.

Increasing emphasis on the use of natural gas by large economies as well as developing nations in Southeast Asia and increasing exploration activities are expected to boost the demand for offshore vessels, which in turn is estimated to propel the demand for services in the SEA market throughout the forecast period.

By Type of Vessel:

How much is the Watertight Doors Market Worth?

At What Rate did the Watertight Doors Market Grow in the Last Five Years?

What is the Market Share of Top 5 Players in Watertight Doors Market?

What is the North America Watertight Doors Outlook?

At What Percentage will the Watertight Doors Market Grow in Europe?

The Europe market is estimated to grow at an average annual rate of 4.4% in the forecast period.

What is driving demand for Watertight Doors Market?

Rising awareness towards safety of the crew members, swiftly growing fishing and shipping activities across the world will drive growth of the watertight doors market.

What are the Key Trends of Watertight Doors Market?

What are the Key Statistics for Watertight Doors Market in Japan and South Korea?

Global share cumulatively for Japan and South Korea in the watertight doors market is 27%.