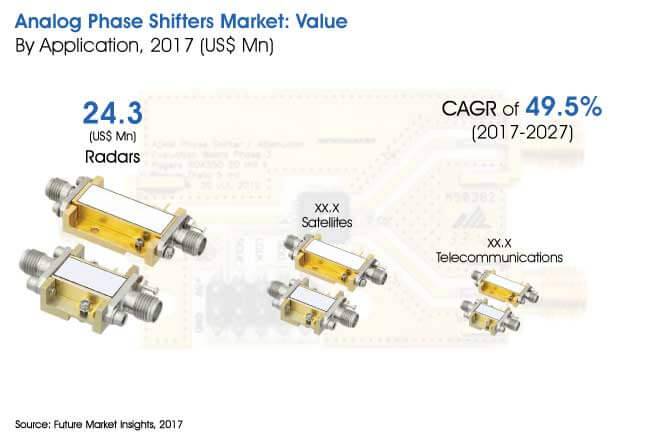 As political instability and civil war continues in the Middle East, rich economies like the U.S. and Saudi Arabia are likely to spend heavily on their aerial defence programs. Procurement of air-to-surface missiles and up-gradation of military jets is also on the rise. Many countries are even implementing usage of drones into their arsenal. As phased array antennas are largely used in missile defence systems and military jets, the increasing focus on aerial defence will result in a favourable demand for analog phase shifters in the coming years.

Phased array radars have become omnipresent to defence applications due to significant investments over a long period of time. Several technological advancements in this sector have garnered the interest of a number of industries. The application of phased array technology is done in many technologies such as air traffic control, weather monitoring, and automotive radar. Other than this, the usage of phased array antennas is also rampant in passenger airlines and private space explorers to develop applications on top of the currently available products. The current technologies have undergone a significant overhaul on their design and efficiency and thus, manufacturers have leveraged their technology skills gained from defence expertise into the development of commercial solutions.

Traditionally, phased array radars have been costly, inflexible, and complex to calibrate. This was acceptable in the case of defence applications because the defence industry is generally characterised with longer product development cycles and costlier products. However, airlines have put forward cost concerns as one of the primary reservations against the adoption of phased array radars. To meet the cost requirements, manufacturers have developed methods to mass produce analog phase shifters and phased array antennas by not using dielectric or meta-materials. What remains to be seen is the actual implementation of cost optimised radars and other analog phase shifter applications in the aviation sector and the subsequent benefits vis-à-vis the price points offered by manufacturers.