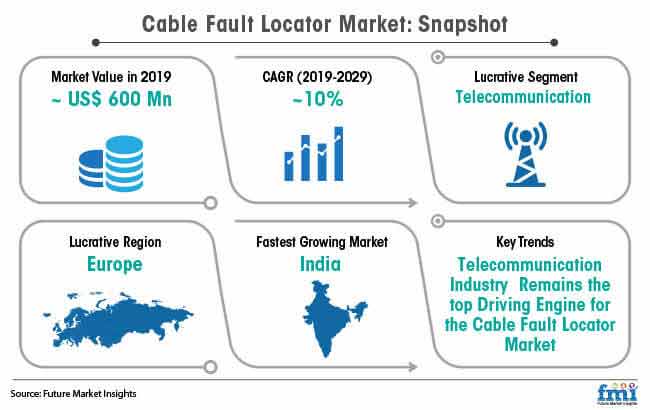 East and South Asian markets for cable fault locator are expected to grow at a significant CAGR during the forecast period, attributing to the presence of fast-growing economies, such as India and China within these regions. Rapid growth in industrialisation in this region is one of the prime factors that are expected to significantly fuel the growth of the market over the forecast period.

The growth of the economies present in this region is primarily driven by industrialisation and urbanisation. The adoption of cable fault locators is expected to increase significantly in this region for checking faults in cables in various products. Thus, all these factors are expected to fuel the market growth of cable fault locators during forecast period at a substantial CAGR.

Growing electronics & telecommunication industry and telecom tower power systems across the world is driving the growth of the cable fault locators market. This industry uses many types of cables, which need high maintenance. The demand for cable fault locators is thus growing in these industries for finding the numerous type of faults related to cables.

Furthermore, rapid growth in the power generation industry is resulting in substantial demand for cable fault locators. Types of cables used in the power generation industry range from 1 kV to 500 kV. Hence, cable fault locators are commonly used to find out faults such as intermittent faults, resistive faults, short circuit faults, and sheath faults in these cables. 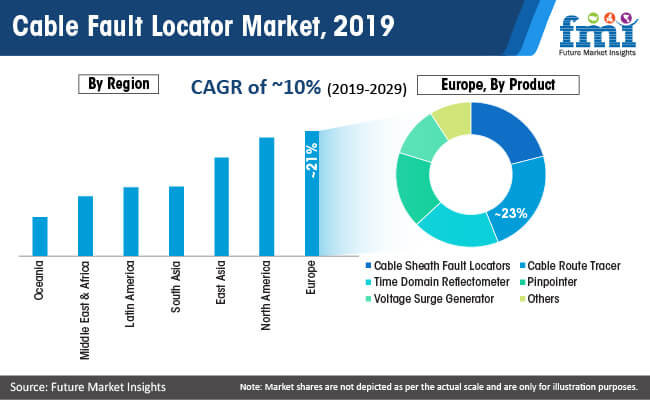 High-voltage power lines are an imperative component of modern-day power distribution, energy, and automation systems. Over the last few decades, millions of miles of power cables have been laid down aerially. However, owing to the significant benefits offered by underground power lines, including harsh weather resistance in conditions, such as rain, pollution, snow, and storm among others, at present, an underground network of power lines is predominant in most parts of the world.

Further, as the digitalization trend continues to penetrate various industrial sectors worldwide, significant efforts are in place that focuses on detecting faults in power lines using digital techniques. Faults in power lines can occur due to a plethora of reasons, including breaking of the conductor, faults in insulation, and weakness of the cables among others. Detecting and addressing the faults in power lines is thus highly crucial to restoring power supply, and minimizing downtime and supply distribution.

In the last couple of decades, fault detection by deploying traveling waves has emerged as one of the most efficient and reliable fault location technique, especially for long transmission lines. In addition, by integrating with line protection relays, traveling waves offer critical insights to technicians and operators.

Although the traveling waves principle is a known concept within the power industry, in the current scenario, its adoption is on the rise owing to the limitations of impedance-based principles. The detection of fault locations by deploying the traveling wave principle offers significant benefits over phasor-based elements.

Further, fault location is calculated by assessing the difference between the arrival times of the wave pulses – enhancing the accuracy and precision of the fault location process by a significant margin. In the current scenario, owing to advances in technology and the advent of innovative solutions, accurate measurement of time by utilizing digital substation tools is possible within various distributed devices.

Moreover, traveling waves propagate at a speed close to that of light – a critical factor that in transmitting data related to an existing fault to the line ends at a rapid pace enabling swift processing of the detected fault. Thus, all in all, owing to the limitations of impedance-based principles and favorable functionalities, the adoption of traveling wave techniques for fault detection in long transmission lines are expected to grow in the upcoming years.

At present, the developed regions including North America and Europe are expected to stand strong in the global cable fault locator market owing to rapid development in fault location techniques, the introduction of innovative and effective techniques, and a strong presence of leading market players. In addition, companies including BAUR and Megger have consistently invested in product innovation and development – a trend that is applicable to numerous market players operating in the aforementioned regions.

However, East Asia is likely to gain a significant market share in the upcoming years owing to large scale adoption of new fault location techniques such as time-domain reflectometry and robust growth of the telecommunications sector in nations including China, South Korea, and Japan.

Key players operating in the cable fault locator market are highly inclined towards enhancing their product portfolio by leveraging technological advances. Further, growing focus on introducing innovative products and improving the durability of existing products is a prominent strategy that several market players are likely to adopt in the near future, to establish a solid footprint in the competitive market landscape.

For instance, BAUR GmbH Company recently developed a highly versatile and state-of-the-art vehicle-mounted cable fault location system that can be deployed to perform a range of applications. In addition, to improve their overall position in the market, manufacturers are concentrating their efforts to enhance operational capabilities of their cable fault locators.

The upsurge in demand for technologically advanced and innovative products within the network and telecommunications domain is expected to positively impact the demand for cutting-edge cable fault locator systems.

Further, the advent of disruptive technologies including the Internet of Things (IoT) in the power industry, coupled with growing emphasis on minimizing power outage, power consumption, and costs, are some of the other factors that are likely to favor the growth of the cable fault locator market in the foreseeable future.