The codeless testing market will register exponential growth in 2021 and beyond, with the overall valuation estimated to reach US$ 1.5 Bn in 2021. Future Market Insights (FMI) projects codeless testing demand to increase at 15.5% CAGR between 2021 and 2031.

Following the onset of the COVID-19 crisis, the demand for codeless testing for remote operational applications will surge through 2021. The study also forecasts desktop applications of codeless testing to account for 36.9% of market share in 2021, while API testing applications are set to register relatively faster growth at 18.6% CAGR through the end of 2031.

The demand for codeless testing will rise at 15.5% CAGR between 2021 and 2031 in comparison to the 10.6% CAGR registered during 2016-2020. Most software testing companies have come a long way, from manual testing to mostly automated testing methods. 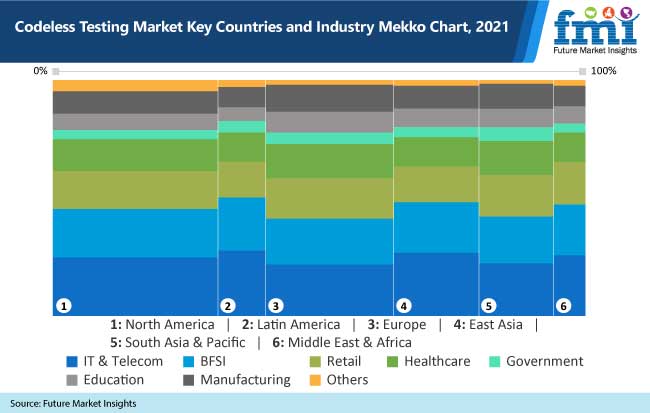 Testers can now automate test cases without any coding knowledge, rather than spending a lot of time on writing scripts, by using sophisticated and computer assisted coding software. In addition, codeless/script-less testing tools allow users to automate swiftly through reusable tests by enabling testers with minimal exposure to test automation.

The factors responsible for rapid growth of codeless testing tools include the easy evaluation of code by non-technical team members, the reduction of time that testers spend on recurring test cases, which will bolster demand for codeless testing in the near future.

The shift towards codeless testing has been widely driven by advent of Machine Learning (ML), machine learning as a services, and Artificial Intelligence (AI). AI is being used in all aspects of testing, including codeless automation testing, performance testing, regression testing, and functional testing. Over the past few years, AI and ML has been gaining importance, as it reduces the test lifecycle. These advanced technologies help to increase the ROI of software testing firms.

How are Increasing Investments in Artificial Intelligence Impacting Market Growth?

Codeless testing solutions are characterized on technologies including DevOps, the Internet of Things (IoT), and AI. Rising investments in artificial intelligence technology is estimated to create growth opporunities for codeless testing as it has the ability to create test cases based on actual user data and to learn from different user flows.

Thus, helping test engineers to reduce the time spent on creating new test data as AI automates test cases based on actual user data, is a major factor for companies to opt for codeless testing solutions.

Replacing static locators with dynamic locators is projected to make testing software stable, due to which execution and authoring of tests run at high speed. This helps to increase test handling cases and to make automated tests much more effective.

In October 2019, IBM Corporation, announced that the company has released its Auto AI. It is a new set of competencies for its flagship product “Watson Studio”. Such new capabilities are designed for automating several of the monotonous and complex activities associated with optimizing, designing, and governing AI in the company.

What is the Impact of the COVID-19 Crisis on the Codeless Testing Market?

The COVID-19 pandemic has made automation coupled with testing a trending platform as companies take risks and expand business continuity plans. In May 2020, IBM Corporation had launched a comprehensive range of new AI-powered services designed to help enterprises in reducing the total costs of ownership and automation to survive upcoming disruptions.

At the time of the COVID-19 pandemic situation, major vendors operating in the market focused on automating IT operations to recover from the crisis. Companies will invest more in robotic process automation (RPA), artificial intelligence, and cognitive capabilities as businesses recover from the pandemic.

How is the Codeless Testing Market Faring in the U.S.?

According to the study, the U.S. is expected to account for over 79% of the North America market through 2031. North America is predicted to remain one of the most attractive markets during the forecast period. This is contributed by major developments in the U.S. market for codeless testing.

For instance, in August 2019, Tricentis, which has a significant presence in the U.S., acquired TestProject, a community-powered automation testing platform designed for agile teams. As part of the commitment to TestProject, Tricentis plans to extend the community, help software testers enable the best Android and iOS test automation practices, while investing in research and development (R&D) to develop advanced products augmenting demand for codeless testing.

Why is the Demand for Codeless Testing Increasing in the U.K.?

Demand in the U.K. market is expected to rise at nearly 16% CAGR over the forecast period. Over the coming decade, the software testing services industry is expected to continue growing strongly.

Increasing software investment among U.K. businesses and the continuing expansion of service offerings within the industry are expected to facilitate demand for codeless testing tools.

Furthermore, IT adoption is expected to continue to expand, although at a much slower rate, which will likely encourage investment in information technology infrastructure and further generate industry demand.

As per the report, the U.K. is recognized as a primary market, and it is expected to continue exhibiting high demand for codeless testing through the forecast period.

How is China Contributing Towards Codeless Testing Sales?

By 2031, China will account for over 44% of sales of codeless testing solutions in East Asia. China is the fastest-growing economy and is expected to offer a favorable market for codeless testing vendors.

The country is witnessing accelerated growth of digital transformation and rapidly increasing connectivity. The country also has many established SMEs, which are growing at an exponential rate to cater to their large customer base, which will create a conducive environment for long-term growth.

Why is the Demand for Codeless Testing Tools on the Rise?

Based on solution, codeless testing tools are the leading segment, accounting for nearly 59.5% of the market in 2021. The growing adoption of cloud-based automation and testing is analyzed to be one of the major drivers for codeless testing solutions.

Cloud based automation tools are cost effective, agile, and scalable owing to which these tools are witnessing significant adoption in SMEs and start-ups. Apart from this, the integration of machine learning and artificial intelligence in codeless testing tools is easing usage, which is also set to assist market growth during 2021-2031.

Software testers prefer codeless test automation as a critical component when it comes to the agile development procedure. These elements are estimated to create new growth avenues for codeless testing tools, during the forecast period.

How API Testing is Projected to Create Demand?

It involves testing application programming interfaces (APIs) directly and as a part of integration testing in order to determine if they meet expectations regarding functionality, reliability, performance, and security.

API testing offers a number of advantages including finding bugs in a time-efficient manner. Once the logic is designed, tests can be built for validating the correctness in data and responses with API testing.

How are Large Enterprises Likely to Influence Demand?

The large enterprises segment is estimated to hold the largest revenue share of more than 60% in 2021. The increasing preference among enterprises for efficient testing solutions and automation capabilities is expected to drive the demand for codeless testing in the large enterprise segment.

Furthermore, the growing emphasis on strategic decision-making and resource allocation is expected to further drive the growth of the large enterprise segment in the market.

Why Does the IT and Telecom Segment Hold Major Value Share?

The IT and telecom sector is expected to contribute maximum share of more than 24% in terms of global demand for codeless testing in 2021. With the help of codeless testing, IT and telecom organizations can gain quick feedback on the mainframe, and supercharge innovation without the risk of bottlenecks that disrupt operations, hinder customer experiences, or impacting revenues.

Enterprises can improve quality, velocity, and efficiency on the mainframe while lowering the problems of shortage of experienced developers, thereby contributing significantly to the development of codeless testing solutions.

Companies operating in the codeless testing market are aiming at product innovation and strategic partnerships with other manufacturers to expand their portfolio and production capacity to meet the demand of an expanding customer pool.

Manufacturers are also focusing on mergers and acquisitions to maintain global presence.