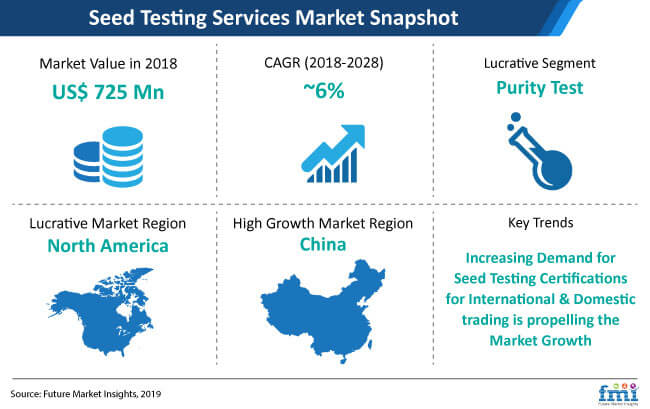 Developing techniques to maximize crop’s yield is creating the demand for testing services that provide significant information about quality of agriculture products. This factor is projected for boosting the growth of the seed testing services market.

Also, high demand for maximizing crop production with cost savings has been directing the focus of growers towards seed testing services that give significant information about seed health. The sales of seed testing services are expected to increase in the near future because of increasing adoption of agricultural services across the globe. 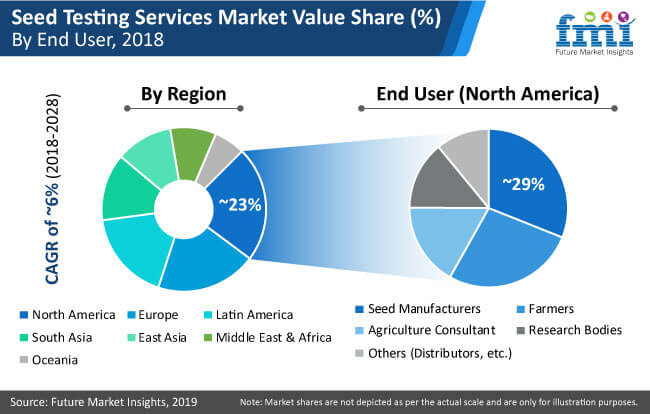 Among all other types of agricultural testing, such as water, soil, and agricultural equipment testing, process of attesting seed quality, widely known as seed testing, has been gaining massive popularity. Mandates on attaining seed certifications for seed exports and imports is another key factor pushing the adoption of seed testing services.

Massive investments in agri-related ventures are foreshadowing new opportunities for seed testing service providers in 2019 and beyond, given that ‘tested’ and ‘certified’ are emerging as the new synonyms of ‘quality’.

Practice of organized seed testing started more than a hundred years ago, with an initial objective of staving off the unscrupulous ways of seed trading. The first ever laboratory for carrying out the process of seed testing was set up in Germany in 1869, under the supervision of the renowned German botanist Frederick Nobbe. This particular establishment laid the foundation of set-up of various other laboratories across multiple regions, thereby making seed testing as a new norm of effectual agricultural practices.

Though seed testing was pursued as a research endeavor in the 19th century, yet in the recent years it has evolved to be a significant facilitator of seed trade, a crucial instrument of regulatory enforcement, and a chief quality assurance tool for seed industry. However, service providers active in this market will have to make sure that their seed testing services are keeping up well with the technological advancements in agricultural operations, which, in turn, would help them gain competitive advantages over their rivalry.

Leading seed testing service providers active in North America and Europe are also focusing on operational expansion across fast-growing economies of East Asia, with an objective of consolidating their position in the global market space.

The seed testing market space reflects a moderate degree of consolidation, wherein the leading companies continue to maintain strategic focus on offering exclusive seed certification schemes. Key service vendors in the seed testing services market are focusing on bringing beneficial services to end user’s table, which is acting as a key aspect upholding their growth in this turbulent market space.

Leading service providers are equipping their clientele with enhanced access to highly experienced as well as qualified workforce, who safeguard customer satisfaction with reliable, consistent, and independent services, yet with extensive focus on business ethics and compliance. Key players are also drawing upon the increasing demand for hassle-free agriculture testing services by offering real-time, accurate, and reliable results with faster turnaround time (TAT).

How Growth Will Unfold?

Market players’ focus on tailor-made services is likely to get stronger during the forecast period, as end users remain inclined toward personalized services to reap substantial benefits. Sensing latent opportunities brewing across developing economies of East Asia, market partakers are centering on strategic expansion in China and Japan via establishment of a bunch of exclusive laboratories.

Leading players in the seed testing services will continue to benefit from their extensive networks worldwide with multiple points of service. In addition, leading players are also pursuing green initiatives via introduction of paperless laboratories, which further served as an ‘add-on’ to their existing brand values. Service providers are also placing their bets on mergers and acquisitions that would further help them gain advantages from combined expertise as well as shared resource pools.