Linseed oil, often termed as flaxseed oil, is derived from the ripened, dried seeds of the flax plant belonging to the Linum family. Linseed oil generally tends to be colorless to yellowish in color. The flax plant is one of the oldest plants on Earth, and has been cultivated even by ancient civilizations. The flax plant and linseed oil have been benefiting many generations of humans as well as animals, be it in the production of linen, ropes from the stem, or providing health benefits with medicinal properties.

Linseed oil cake, or simply linseed meal, the by-product of the production of linseed oil, has been used in livestock feed to enrich the fatty acid profile of meat, milk, and eggs, owing to the high content of polyunsaturated fatty acids, particularly alpha-linolenic acid and conjugated linoleic acid, of linseed oil. With the scientific revolution and technological developments, the flax plant is cultivated mainly for the production of linseed oil by pressing, and is utilized in paints, varnishes, lubricants, and the leather industry.

Most American diets lack sufficient amounts of omega-3 fatty acids, which can be fulfilled by consuming linseed oil as a salad dressing or in a smoothie. Linseed oil is a rich source of ALA (alpha-linolenic acid), which is a precursor of essential omega-3 fatty acids EPA (eicosapentaenoic acid). Several studies have pointed out that, including omega-3 fatty acid-containing food in the daily diet might help fight obesity in a healthier way,due to its ability to improve the adipocyte function.

Researchers have studied the effect of the consumption of ALA from linseed oil in combination with diacylglycerol on obese people, and have stated that, visceral fat or adipose tissue accumulation in the abdominal area was significantly lowered. In addition to this, linseed oil is used in sports nutrition, since it helps improve the body’s metabolic rate and also aids in burning body fat, which then acts as fuel for the muscles.

With the substantiated robust connection between the diet and disease, many health conscious people are keen on consuming healthy food and keeping a track of the food that they are consuming. With the publicity of the health benefits of linseed oil, its demand is likely to get a boost. Moreover, being organic and of vegetarian origin, linseed oil is replacing other oils such as fish oil as a dietary supplement.

Linseed and linseed oil is the largest source of lignans on Earth among all plant sources, a polyphenol compound found in plants. Lignan from linseed oil acts as phytoestrogens, a plant nutrient having anti-carcinogenic properties. Numerous studies on rats and mice have shown that, linseed oil rich in lignan can reduce the size of a tumor and prevent metastasis. Especially, studies on breast and prostate cancer have shown successful results in humans.

Research conducted with linseed oil enriched in lignan provides evidence that, it is possible to prevent cancer. According to a study, the Budwig Diet, one of the most popular anticancer diets, which is obtained by linseed oil mixed with cottage cheese, leads to a chemical reaction between the sulfur protein in the cottage cheese and linseed oil due to the mixing of the oil and cottage cheese, which makes absorption of the water miscible oil into the cells possible. 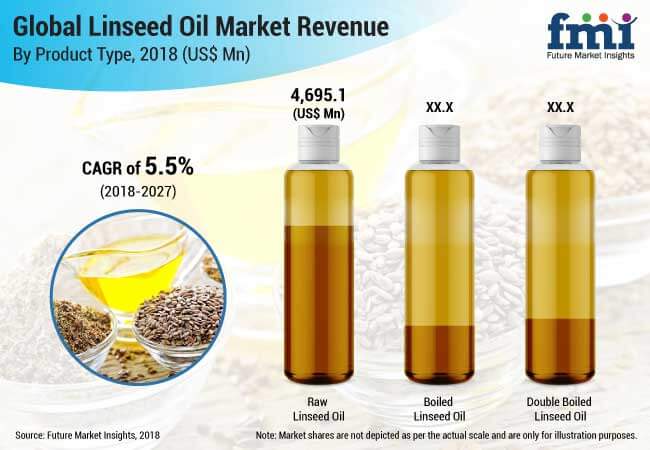 Many health benefits associated with linseed oil are due to the rich content of PUFA, fiber, protein, and vitamins. Linseed oil has been used since ancient times to treat constipation, diarrhea, and inflammation, reduce eczema, improve skin health, etc. Other health benefits provided by linseed oil include lowering cholesterol levels, improving gut health, helping in weight loss, lowering the risk of diabetes, improving heart and kidney health, treating the symptoms of ADHD, preventing osteoporosis and improving bone health, treating menopausal symptoms, etc. These health benefits from linseed oil are being studied by researchers. In terms of revenue, the global linseed oil market is expected to account for approximately US$ 6,800 million in 2018.

Currently, aquaculture is rapidly growing at a tremendous pace, causing concomitant growth in the aquaculture feed industry. Traditionally opted feed ingredients such as fishmeal and fish oil are limited due to current available resources. To meet the increasing demand for aquaculture feed, vegetable oils such as linseed oil and rapeseed oil are being adopted.

Although the fatty acid composition of linseed oil and other vegetable oils is different as compared to fish oil, a mixture of vegetable oils can be used instead of a single vegetable oil. Studies have revealed that, substituting fish oil by vegetable-based oil such as linseed oil has no negative effect on the final weight, growth, survival, and fatty acid profile of the test aquatic animal.