Economically developed regions are witnessing decent growth in dewatering pumps market, attributed to opportunities in existing commercial and industrial processes. Whereas, emerging economic regional markets are expected to witness robust growth in demand from the upcoming infrastructure projects across municipal construction and mining.

Increasing urbanization in the emerging as well as developed economies coupled with growing middle class population has led to a surge in worldwide constructional activities. Another factor that strengthens the above sentence is the migration of people from sparsely populated villages to densely populated cities.

These factors have led to an increased demand for housing and infrastructural developments around the world that favors the growth of dewatering pump market, especially the centrifugal pump segment, which is widely used for construction as well as industrial sector.

The global GDP is mainly propelled by major developing countries, such as India, China and some other Asian countries, owing to the high emphasis being put on infrastructural developments and propulsions in industrial production. Due to political and strategic transformations, several countries have managed to emerge lucrative for investors.

China is likely to take the lead in the utilization of dewatering pumps, globall

Rapid industrialization and urbanization in emerging economies such as China, India and ASEAN region are expected to lead to increase in investment in energy and water infrastructure development. Most pump manufacturers have established a base in Asia Pacific to take advantage of low-cost labor in the region.

Most global pump suppliers, have garnered a high percentage of their raw material for pump manufacturing from China, with emphasis on metal castings, followed by rubber and plastics goods. Low priced pumps offered by Chinese players is a major barrier to overcome for most global players operating in the centrifugal pump market but is certainly beneficial for the Chinese players. China has been the longstanding exporter of centrifugal pumps and is expected to retain its dominance in the market over the forecast period. 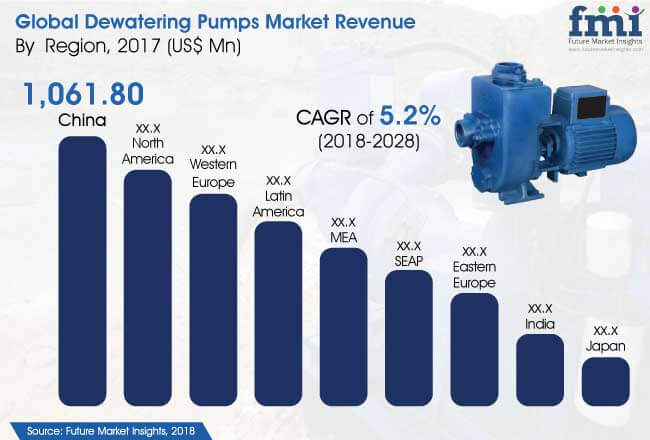 North America will closely trail China in terms of adoption

With increasing demand for energy and power, end users are impelled to enhance oil and gas recovery processes from existing fields, as well as explore new fields. This trend, coupled with demand for automation, energy-efficient and environmental-friendly pumps, are expected to offer considerable growth opportunities for manufacturers in North America. In 2014, the U.S. was the largest producer of oil and natural gas, overtaking Saudi Arabia and Russia, driven by extraction of energy from shale rocks (shale oil).

Moreover, increasing demand for dewatering pumps in the chemical industry to move chemicals is also expected to contribute to the market growth. Furthermore, rising concerns regarding waste water treatment and actions being taken for the same in North America will fuel market growth to a great extent.