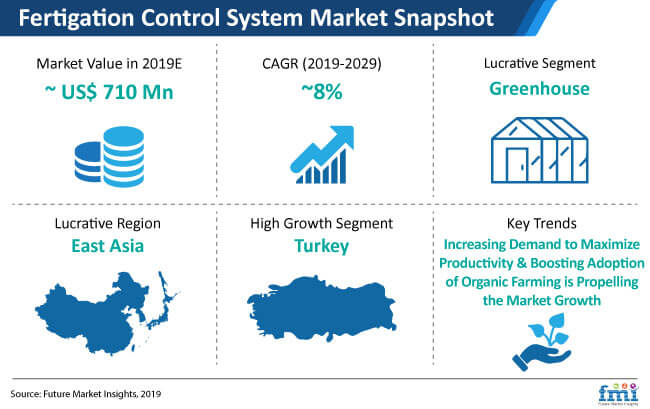 The food products produced organically are largely accepted across the globe, in which farmers are using various irrigation techniques with fertigation system as per nutrient management plan. Moreover, the required nutrient in irrigation water estimated to enhance overall organic food production, which is witnessing the market growth of fertigation control system. 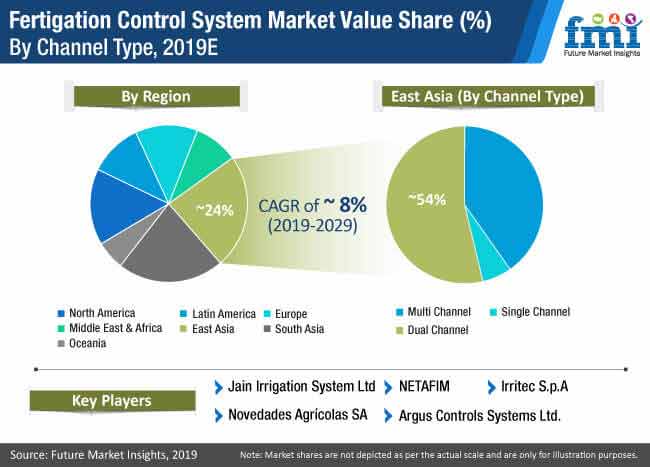 Fertigation Control System - Marching into an Era of ‘Smart Farming’

A massive wave of technology continues to impact a number of industries, and it is rapidly reaching one of the most traditional industries – agriculture. Although the farming sector has remained largely unaffected by the technological revolution, it is ready for a paradigm shift as world’s rising demand for food couples with newer opportunities. The world’s food system is desperate for an overhaul, as the two significant demand drivers – population and income – are on the rise.

An increase in population has also resulted in scarcity of arable land and depletion of water & related resources, potentially raising the need for a profound change in the farming industry. High-tech innovations, such as precision farming, driverless tractors, seeds genetically altered to require less water, and produce growing in huge climate-controlled warehouses are making, or about to, make farms smarter, more productive, and highly efficient.

With the leap from prototype to commercial operation of new agricultural machines, farming operations are becoming more sophisticated. As environmental regulations continue to get stricter and consumer concern over the use of agrochemicals increases, the developments in precision farming in general, and ‘Fertigation Control System Market’ in particular, warrant an in-depth understanding and unbiased analysis.

Today’s crops crisscross the globe, and the challenge of increasing the food production to feed the growing population – with less and less land – has become a global concern. In consequence, scientists are hard at work initiating a new revolution, and farmers are rapidly turning into new technologies to evolve their standard practices and benefit from the improve outcomes.

Fertigation control system, used to deliver plant nutrients and water to produce crop quality and higher yields, continues to garner significant traction for its specific advantages over broadcast and band fertilization. Continual innovative transformations in fertigation control systems have to led to widespread of automation increased scope of application in many areas.

As the need for efficient farm management systems is on the rise, manufacturers are focusing on incorporating newer technologies such as Internet of Things (IoT) in their products. Apart from the technological revolution, the emergence of ‘organic farming’ has brought significant transformation in the agriculture sector, and the result is likely to lead to increased demand for fertigation control systems.

However, the high price tag of the system and lack of awareness among farmers, especially in low- and mid-income countries continue to represent a threat to the stakeholders.

Where the Fertigation Control System Market is Taking Off?

The trend of ‘smart farming’ is not only pertinent in developed countries, developing countries are also realizing its immense importance. Asia Pacific remains in the vanguard of fertigation control system market, owing to increasing adoption of agricultural technologies through favorable government schemes and robust funds from financial institutions. The emergence of highly populous countries, China and India, as the world’s largest food producers and consumers have also led to realignment of stakeholders’ strategies.

Greater acceptance and awareness of new technologies will complement the market to flourish in North America and Europe. High growth opportunities are expected in Latin America and MEA, due to growing adoption of improved technology and better management system to boost crop production and reduce the dependence on food imports.

Realizing the advantages of smart farming and its massive impact on the agricultural economy, the governments of several countries are taking initiatives to promote precision farming techniques in line with wide-scale deployments of smartphones and IoT systems. The expansion of fertigation control system market will continue to weigh on the same scale as rapid adoption of precision agriculture solutions.

Apart from upgrading their products to enhance efficiency and productivity, manufacturers are focusing on improving their services to capitalize on a wide range of applications including hydroponics, commercial potted plant producers, living walls, and high-tech growing facilities. In addition, rapid growth in number of agricultural and greenhouse projects worldwide will continue to work to the advantage of manufacturers.

Considering the growing popularity of precision farming techniques, manufacturers are placing their bets on advanced solutions that can help farmers grow more food with less resources. For instance, in 2018, Netafim introduced a digital irrigation solution, ‘NetBeat’, which provides farmers with real-time recommendations based on data related to plant, soil, and weather conditions to personalize their irrigation programs.

Between today’s labor shortages and ever-increasing demand for food, farmers are constantly seeking out technology to predict and prevent threats to millions of acres of crops across the globe. Innovations in agriculture solutions such as fertigation control systems will not only help manufacturers lift their profit pools but also help propagate the growth of farming crops.