Future Market Insights (FMI) projects the fiber optic gyroscope (FOG) market demand outlook to remain positive, with sales predicted to surpass US$ 1,413.2 Mn by 2021. Continued use in military and defense applications for missile flight control, dynamic GPS tracking, and ground detection will enable year over year growth at 6.5% in the market in 2021.

Advantages in terms of cost, reliability, and complexity over competing technologies will drive fiber optic gyroscope application at 7.4% in the military and defense sector. Besides this, market is expected to gain momentum will application rising at an impressive pace in remotely automated vehicle guidance technology.

Emergence of autonomous vehicles, and widespread use of FOG sensors in military and defense applications is likely to drive the market over the coming years. The fiber optic gyroscope demand will rise at 8.3% CAGR between 2021 and 2031 in comparison above 6.8% CAGR registered during 2016-2020.

Fiber optic gyroscope (FOGs) are used in several important applications such as navigation and positioning systems, angular velocity sensors, stabilization equipment, and recently and most importantly, in autonomous vehicle guidance backup systems for GPS-inaccessible areas. FOGs are expected to be very crucial part of inertial sensors that determine the movement of a driverless car through a curve.

Autonomous vehicles need FOGs for navigation and stabilization of the platform in demanding battlefield, aerospace and undersea environments. This category places high demand for FOG technology as automakers aim for extreme ruggedness, small-size, light-weight, low-cost, and low-power operation in their vehicles.

According to KVH, these inertial measurement units (IMUs), which combine FOGs with accelerometer components, are able to provide highly accurate angular rate and acceleration data to precisely track the position and orientation of the car - even when GPS is unavailable – to keep the vehicle on its intended course. Thus, FOGs and FOG-based IMUs will become key parts of the sensor mechanisms essential for accurate autonomous car performance. 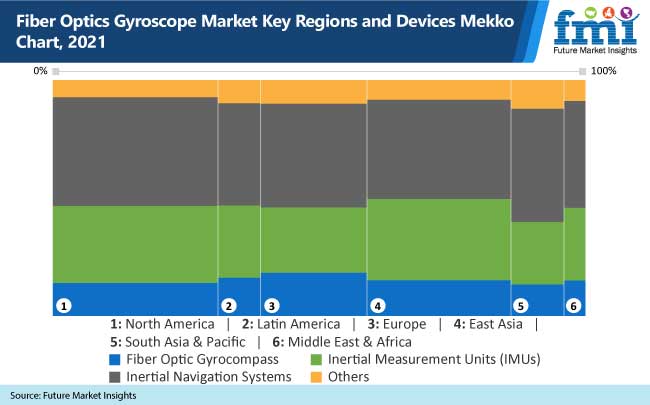 Apart from increasing defense budget in several developed and developing economies, the growing adoption of automation in homes and industries are the primary factors that are positively influencing the demand for fiber optic gyroscope.

For satellite antenna positioning, navigation, and other applications, the demand for equipment optimized with intelligent sensors is escalating. Growing popularity and development of the concept of remotely operated vehicles and the use of FOG for measurement while drilling processes in the oil industry is another factors augmenting the demand in this market.

What Is the Impact of COVID-19 Crisis on Fiber Optic Gyroscope Sales?

The COVID-19 pandemic has had a significant impact on nearly all spheres on the global economy. Due to restricted connectivity during the lockdown, supply-chains, exchange and transfer of essential goods and services and distribution of various commodities have all been affected.

The pandemic has adversely affected many countries worldwide, resulting in negative impact on the global economy. According to Jane's Information Group, the forecast for European defense expenditure in 2021 down to USD 288.8 billion – a 0.97% decrease on the previous year – after accounting for the economic impact of COVID-19, both in general economic terms and on public spending. Before the COVID-19 crisis, Jane’s forecast European military expenditure to increase by 2% in 2021 to USD 302 billion.

The pandemic has driven most of the affected nations into shutdowns, restricting their commercial and industrial activities. The U.S. Russia, Spain, France, the U.K., Italy, and Germany are some of the worst-affected countries due to the COVID-19 outbreak. These are major manufacturing hubs for sectors such as automobiles, transportation, aviation, construction, energy, and power.

The spread of virus has directly affected the production and demand of FOGs. All the companies working in the field of FOG manufacturing had gone on hold for more than eight months. The market disruptions due to the coronavirus pandemic has resulted in 3%-5% Year on Year (YoY) decrease in annual FOG devices in 2020. However, as per research, the FOG manufacturers have started recovering from the first quarter of 2021, also the global market would possibly recover soon in the coming quarters of 2021.

How big is the Opportunity for Fiber Optic Gyroscope Adoption in the U.S.?

The U.S. is predicted to remain one of the most attractive markets during the forecast period, according to Future Market Insights. According to the study, the U.S. is expected to account for over 82% of the North America market through 2031.

As per the U.S. Department of Defense, the U.S. military spending spends $934 billion, second-largest item in the federal budget after Social Security. From which $705 billion spends by the department of defense alone. FOG majorly used in military applications such as RADAR systems, electronic surveillance, GPS, navigation, and ATC (Air Traffic Control), and many more.

The country also exhibits the presence of several key vendors such as Honeywell International Inc., FOG Software Group, EMCORE Corporation, and KVH Industries, Inc. who develops FOG based automation technology, military applications, aeronautical applications, and many more. Over the years, the country’s spending on military applications has greatly increased, which is ultimately propelling the demand of FOG.

In April 2021, KVH Industries, Inc, which has a significant presence in the U.S., announced partnership with Lockheed Martin to develop and deliver the next-generation multi-axis FOG sensor for the IRST21 sensor system.

IRST21 used infrared and other sensor technologies to detect and track airborne threats with weapon-quality accuracy which increases pilot reaction time and improves survivability. Such developments have been ongoing in the country, thus augmenting the fiber optic gyroscope demand in U.S. region.

Why is Demand for Fiber Optic Gyroscope Increasing in the U.K.?

Demand in the U.K. market is expected to rise at nearly 12.0% CAGR over the forecast period. The UK spends more money on defense among other European countries. Since end of cold war, it increased its defense budget for spending on shipbuilding, space, and cyber.

As per the report, the Indonesia is recognized as a primary market, and it is expected to continue exhibiting high demand for fiber optic gyroscope through the forecast period.

How is India Contributing towards the Fiber Optic Gyroscope Sales?

India will account for over 54% of share in South Africa and Pacific and expected to rise at nearly 13.5% CAGR over the forecast period. India is one of the growing economy and is expected to offer a favorable market for the fiber optic gyroscope vendors.

Over the years, India’s spending on defense sector/military has significantly increased. Most of the FOG used in aerospace and aviation technologies. Increase in demand of military applications will propel the market growth of the fiber optic gyroscope.

In recent years, the country has experienced increasing demand for RF filters in applications like electronic surveillance, GPS, navigation, smartphones to transit, filter, and receive paths for 3G, and 4G technologies augments the demand of fiber optic gyroscope in this country.

The country is witnessing accelerating growth of digital transformation and rapidly increasing connectivity due to digital transformation and growing demand for wireless systems/automation technology. The major factor contributing to the high growth rate is increasing adoption of Smartphones in India. The country has many established SMEs, which are growing at an exponential rate to cater to large customer bases.

Which Sensing Axis is More Preferred in FOG market?

Revenues of 3-Axis segment grew a robust 8.0% year over year in 2021. Demand of 3-Axis segment increased at a steady rate between 2020 and 2021, giving the combined sensing axis markets year-over-year growth of 6.5% in 2021, according to the Future Market Insights.

Based on sensing axis, 3-axis segment is expected to grow at a high pace, accounting market share nearly 42.5% of the market in 2031. The 3-axis fiber optic gyroscope has potential to meet both the low-cost, compact sized, as well as high performance needs of inertial navigation and precision applications in spacecraft’s.

This type of gyroscopes are used in vehicle, underwater, and aerospace attitude measurement. The high-precision 3-axis fiber optic gyroscope and high-precision quartz flexible accelerometers are implemented for north seeking and positioning and highly integrated in Inertial Navigation Systems (INS) for autonomous navigation. Thus, the growing adoption of 3-axis FOG sensors in autonomous vehicles, submarines and spacecraft’s is expected to propel the market growth of fiber optics gyroscope.

In the fiber optic gyroscope research study, military & defense and aeronautics & aviation application segment revenue totaled US$ 831.3 Mn for 2021, according to the analysis conducted by Future Market Insights.

Fiber optics technology played very crucial role in aerospace and Defence industry. The technology has been continuously been under development in the Army, Navy, and Air Force for applications, which range from Fiber Optics payout dispensers for air, land, and marine vehicles to Fiber Optics sensors for vehicle-navigation and environmental sensing and monitoring.

FOG is a type of angular velocity measuring device, which can precisely determine the orientation of moving objects. FOG has a great value in the military field, because of its remarkable advantages, flexible structure, and broad application prospects. The technology has been used in wide range of applications in the military because of its superiority in angular rate and acceleration measurement and its significant advantages in dynamic range, sensitivity, and reliability.

FOGs can be used for positioning, orientation, and navigation of tanks, submarines, self-propelled artillery, and armored assault vehicles. When satellite-based navigation systems are unable to deliver the information, FOGs can be used to ensure autonomous navigation, precise guidance, and accurate target hitting of the aircraft. Also, these systems are the importation part of aviation fire control system. In firing systems, FOGs are used to stabilize the aiming and firing lines of weapon systems such as armed helicopters, ensuring that weapons can search, aim, track and shoot in motion. In addition, fiber optics gyro is also the only effective navigation technology underwater, which can be used for positioning, orientation and navigation of submarines.

The inertial navigation systems is expected to contribute maximum revenue share of 44.5% in the global market of fiber optic gyroscope in the year 2021.

An Inertial Navigation System (INS) comprises of FOGs and accelerometers, which help it track the orientation and position of an object with reference to a known starting point. The FOG is used to measure the angular velocity of the frame with the sensor. Whereas, the accelerometer is used to measure the acceleration of the moving object in the frame.

Based on this, one can identify the vehicle’s direction, i.e. whether it is moving backward, forward, left or right. By tracking both, the current linear acceleration of the system and the current angular velocity of the system relative to the moving object, the relative orientation of an object and its position can be derived.

These systems are used in navigation applications, where accuracy and performance are of utmost importance, along with the size and cost. The inertial navigation system market is forecasted to witness prominent growth in the near future, due to increasing advancement in technology pertaining to navigation systems.